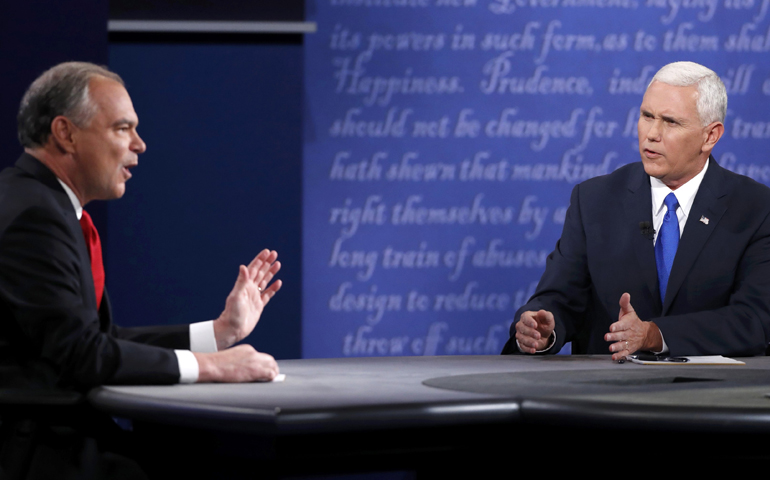 UPDATED: In advance of last night's debate between the vice presidential candidates, Virginia Sen. Tim Kaine, the Democrat, and Indiana Gov. Michael Pence, the Republican, I asked some scholars whose opinions I value to shoot me an email once the debate was over, summarizing their thoughts. I shall share my own thoughts at the end.

Mark Silk, director, Greenberg Center for the Study of Religion in Public Life at Trinity College:

There was one exchange dealing with religion, a question about whether the candidate had, in his past political life, ever faced a tough choice between his faith and his political responsibilities. This was a set-up for Senator Kaine, who strongly embraces his church's, the Catholic church's, opposition to the death penalty. He was criticized for this position when running for governor of Virginia, and prevailed by citing his religious position and saying he would enforce the death penalty if elected - as indeed he did.

Pence cited no such instance, instead pivoting to abortion, and talking about his embrace of the pro-life agenda, including support for adoption in Indiana. He offered no evidence that he ever struggled with a conflict between his religious beliefs and his position as a public official. And, indeed, there's not much evidence that he ever has -- unless it was backing off his support for Indiana's 2015 religious freedom bill under heavy pressure from the Indiana business community.

In this sense, both Kaine and Pence fairly represented the position of their respective parties on the social issues. Since the days of Mario Cuomo, the Democratic position has been to insist that politicians differentiate between the moral positions they take as members of their faith and the moral positions they seek to impose on their constituents. Since the rise of the religious right, Republicans have recognized no such differentiation.

As a fellow Jesuit-educated, social justice Catholic, I was shocked by the performance of Senator Tim Kaine in the debate. Governor Pence was pretty much what we all expected -- the usual GOP bluster of militarism, trickle-down economics, and an impoverished view of the dignity of life that sees only life in the womb. But, Kaine really gutted my hopes. Where was the imprint of his missionary work in Honduras? Where was the glow of Kaine's purported inspiration from Pope Francis? Where was Jesuit spirituality?

At a minimum, I expected to see compassion in Kaine. I wanted to hear his vision for raising up a renewed respect for human dignity in American public life. I yearned to hear him talk about how citizenship and public service must be oriented toward the common good, to talk in a positive way about how refugees and immigrants enrich the human condition, and about the values of family, the moral imperative of care for the earth, and the unceasing Gospel message to serve the poor.

Instead, Kaine was merely the campaign's attack dog. An old-style political role for VP candidates not seen much since Spiro Agnew did it for [Richard] Nixon [the Republican ticket in 1968]. And Kaine was not even "real" about it. His mean-spirited vitriol was transparently the product of hours of focus group testing. That same inauthenticity glared in Kaine's defense of his politically opportune abandonment of past support for the Hyde Amendment [legislation passed in 1976 that prohibits spending federal funds on abortions]. He mouthed the campaign's focus group-tested words, that religion (however wonderful in private life) ought not have a role in forming public laws and policies.

Only a few years ago, I was moved by a compassionate Tim Kaine who spoke eloquently and powerfully about how his religious faith and Jesuit spirituality informed his work as a legislator. It's that old Tim Kaine whom I would wholeheartedly support for vice president -- not this imposter.

Cathleen Kaveny, Darald and Juliet Libby Professor of Law and of Theology at Boston College:

I think both of these men are eyeing 2020 -- striving to seem presidential themselves while loyal to the top of the ticket. Foreign policy got a lot more attention than I would have expected.

And social/cultural issues were literally an afterthought. They came up only in the last 10 minutes of the debate. And the way they came up suggests that this latest round of the culture wars is over. Same-sex marriage and RFRA [Religious Freedom Restoration Act] didn't make any real appearance on either side. No one wanted to talk about them.

What was absent from both sides was the old idea that there is an objective morality independent of religion that governs how to treat questions of moral and political import -- what Catholics often call natural law. Both Kaine and Pence seemed to assume that religious belief infused moral views on abortion -- and other issues such as the death penalty -- on all sides of the debate.

Kaine framed the issue as how to govern in a religiously pluralistic society -- and what his oath of office to uphold the law meant -- including upholding the death penalty. This was calculated to resonate with conservative voters who want judges to uphold the law not make it. I wanted to ask Kaine whether there was a law over which he would resign rather than enforce.

Pence tread more lightly, deploying vague culture of life language. But he tread more lightly than I expected. I wanted to press him on what he learned from the disastrous Indiana RFRA incident. What do we owe fellow citizens who don't read the Bible the same way we do -- or who don't read it at all? But it is clear -- The Nones are making their presence felt -- even in the Republican Party.

Score: Kaine won on substance and Pence on style.  And the country won because neither is Sarah Palin. And Pence isn't Donald Trump -- thank God.

First, and as I've already said, Donald Trump is unfit to be president.

Second, obviously, as a matter of 'debating,' Mike Pence crushed Tim Kaine in the debate. No one who says otherwise can possibly be taken seriously.

Third, tonight's debate confirmed that Hillary Clinton is an extremely weak candidate, and that any normal Republican nominee could win this election.

Fourth, on the 'social issues' question: Kaine gave us a less-thoughtful version of the Kennedy-Cuomo answer. Key: He never, when asked, defended partial-birth abortion or his newly-discovered support for repealing Hyde.  Governor Pence was kind, but devastating: If one is 'personally opposed' to abortion -- or, if as Senator Kaine claims he is, enthusiastically and joyfully committed to the Catholic faith -- one cannot invoke cliches about 'trusting women' when it comes to the issue of taxpayer-funded abortion. Kaine was [Stephen] Douglas, and we know how that worked out.

I agree with most of what my commentators say above. Silk is right that both men played to their party's base, employing arguments that will resound with them even if they do not move the undecided or unaffiliated voters. Schneck is spot-on that Kaine lacked all the inspiration we might hope for from someone who invokes Pope Francis. He really missed an opportunity tonight. I do not like the Stephen Douglas analogy that Garnett employs, even though I once embraced it and it is not entirely without merit. Still, no one, including Douglas, really sympathized with the slave owners, and we do sympathize with women facing a crisis pregnancy. So while the analogy works insofar as both the abortion debate and the slavery debate are categorical, and we have a constitutional system organized around the adjudication of interests not first principles, it fails as a practical and political matter. But, Garnett is right about the poverty of Kaine's argument: Of course, we 'impose' morality in our laws all the time. That is what law does if what law does is seek justice. And, as Kaveny notes, the absence of any real discussion about same sex marriage and RFRA shows that even for someone mugging for the 2020 GOP primary cameras, that debate is in the rear view mirror.

As for my own thoughts on the debate, and prescinding from consideration of the one "social issues" question at the end of the debate, I thought Pence did well, especially as he had, as Chris Matthews observed, a pair of deuces going against Kaine's full house, in terms of having to defend their running mates. I have two major takeaways as to how the debate will affect the rest of the election cycle.

First, nothing but decaf for Kaine from here on out. He was jumpy, overly aggressive, and more than a little obnoxious for the first half of the debate. He did himself no favors. I suspect this was a function of his discomfort in the role of attack dog. Kaine should have chilled out, waited his turn to comment, and made his very salient points calmly and coolly. The points were strong: He really did have the full house. But, in poker, if you overplay your hand, you lose.

Second, Donald Trump will never look at Mike Pence with the same amount of trust as he did before the debate. Pence gave the campaign a boost, but not as big a boost as he gave his own career post-Trump. Given the Donald's evident insecurities, I suspect the suspicion with which Trump will now look at Pence will find verbal expression before Election Day. He will find a reason to put him down, make fun of him, something.