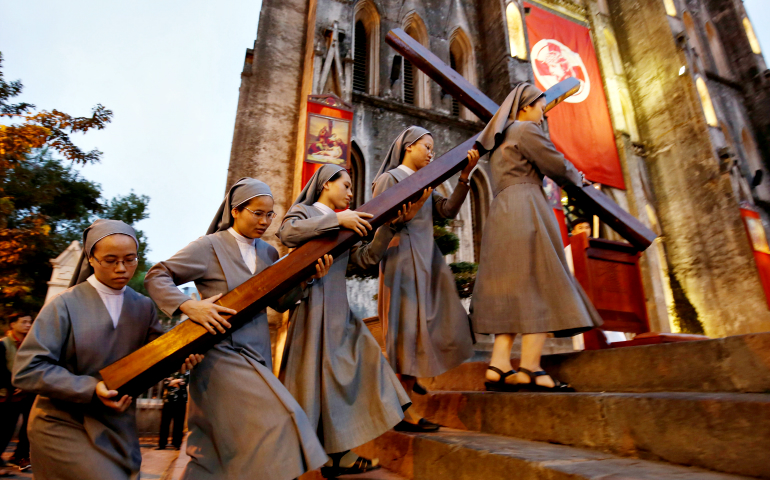 "The persecution of Christians is real. It is global in scope, brutal in its nature, daily in its occurrence, and growing worse than ever." University of Notre Dame Professor Dan Philpott began his talk at an all-day symposium at the National Press Club with those grim words. The symposium was held by the Under Caesar's Sword project to mark the release of a report detailing the ways people can and should respond to the persecution of Christians and to advance the cause of religious liberty throughout the world.

The report makes some interesting points. For example, it notes that there are three basic responses to persecution:

Within each of these strategies, there is a variety of means employed. The report states, for example, that in the "survival" strategy, "Christians aim to preserve the life and the most characteristic activities of their communities, including worship, education, community life, and sometimes evangelization. One response is simply to carry out these characteristic Christian activities against the wish of persecutors and in secret. This response is dangerous and precarious under regimes like those in Saudi Arabia, Iran, Afghanistan, Vietnam, and China."

Yet, in other places, "Christian communities adopt strategies of cultural adaptation, such as speaking in a language acceptable to the regime, showing patriotism outside the walls of the church, or even hiding their faith through deception or feigning conversion to a non-Christian religion."

And, of course, many flee the persecution entirely through migration.

The report notes that Christian theology profoundly affects the way each of the strategies is adopted and implemented. For example, the report states:

The sectarian ecclesiology and individualistic spirituality of many evangelical and Pentecostal churches within the Christian community no doubt makes the association model a bad fit for them.

Cardinal Donald Wuerl of Washington, D.C., delivered the keynote at the event. The cardinal called on Christian to show solidarity with persecuted Christians, first by learning about their plight, but also by raising "our voices to amplify the muted cries of those who are suffering such outrageous persecution. Dare I say, the volume of our voices must make it difficult for others to ignore our pleas. We must speak out to rouse their slumbering consciences and stir them to action."

He encouraged continued material assistance for those facing persecution and, perhaps most importantly, prayer. "We must, of course, continue to pray for them — those who are suffering — and also to pray for a change of heart of those who are inflicting the suffering."

Philpott cited a study by a secular institution in Germany that indicates Christians are the targets of some 80 percent of all instances of religious persecution around the globe. They are repressed by communist regimes and Islamicist states and some secular regimes like those in Central Asia. But he was keen to point out that his efforts, and those of the groups that produced the report, are not indifferent to the persecution of others.

"Our focus in no way undervalues the religious persecution of anyone, anywhere," Philpott said. "The Religious Freedom Institute [which co-hosted the symposium] makes it its daily business to promote the freedom of people of all faiths, consonantly with their dignity as human beings who search for and live out religious truth."

This is vitally important because focusing exclusively on Christian persecution feeds the narrative of civilizational conflict that some of the perpetrators of such persecution wish to advance. The Islamic State group wants to be at war "with Christianity."

The Under Caesar's Sword project confirms what other organizations are finding. Earlier this year, a report by Release International warned that persecution of Christians is likely to increase this year. In addition to the depredations of the Islamic State, which are especially barbaric, attacks on Christians in China and India are on the rise.

"Around the world, Christians face an increasing array of violent persecutors. These include the brutal Islamic State in the Middle East, heavily armed militants in Nigeria and Hindu extremists in India," Paul Robinson, chief executive of Release International, told the Christian Post, adding that the trend should serve as "a wake-up call to take our prayers and practical support for our persecuted family to a new level."

Last month, the group Aid to the Church in Need, which is chartered by the Holy See, warned the British Parliament that the ancient Iraqi Christian community is in danger of extinction. From an estimated 1.5 million Christians in Iraq at the time of the U.S. invasion in 2003, the population has dwindled to an estimated 150,000.

"In terms of finding a future for the displaced Christians we are looking after, we are running out of time. In fact, we are in extra time," Stephen Rasche, who works with the Chaldean archbishop of Erbil, told members of the House of Lords at the meeting. "The susceptibility of Christians to disappearance from Iraq is acute. Without an immediate infusion of aid, the programs which have sustained the displaced Christians could collapse in the next 60 days, after which they could disappear from the region within six to eight months."

In this country, the words religious liberty are often rendered in scare quotes as "religious liberty." There are Christians elsewhere who wish their objections on this front consisted of fighting an insurance mandate to cover contraception. The persecution of Christians is real, as Philpott said, and this report does a good job of both shining a light on that persecution and pointing toward meaningful responses from those of us blessed to live in a country where religious liberty is far, far more real than religious persecution.