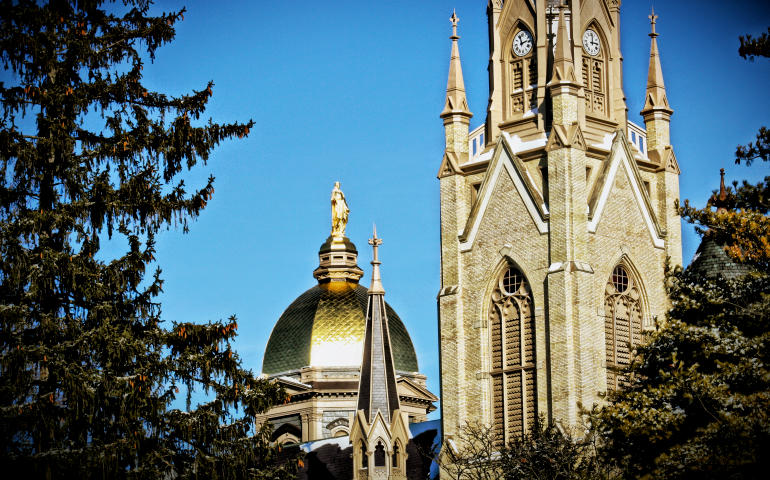 The decision by the University of Notre Dame to invite Vice President Mike Pence to be this year's graduation speaker and recipient of an honorary degree was surely not made lightly. The last six presidents have all been invited to the school's commencement exercises, so the decision to invite someone other than President Donald Trump represents a change from the norm. And that is precisely why it was the correct decision.

The first thing to remember about the decision is that it affects not only the Indiana university's standing, but the actual students whose families and friends will be gathering that day. There were some protests eight years ago, when newly inaugurated President Barack Obama attended the commencement exercises, but those protests were mostly on the internet and at the margins. The day itself was not ruined for the graduates.

Can anyone really think that Trump's presence would not elicit a different kind of protest? Is it not likely that the protests would be so vociferous and widespread that the day would be marred for the students who should be the focus of the day?

I am sure that consideration weighed heavily on the decision-making process, which is not to say Notre Dame is likely to award a heckler's veto to anyone. It is a mere acknowledgement that a man for whom a central campaign theme was the demonization of other people elicits a kind of visceral response, not because some people are too politically correct or thin-skinned, but because that visceral response is what Trump was after. He stoked the flames and cannot now wonder that people recoiled from the prospect of being burned.

This concern for how the day itself would transpire bleeds into the deeper, institutional concern. The choice of a graduation speaker, with or without an honorary degree, is always a kind of icon a school establishes for its mission. There may be times when a school wants to invite a provocative speaker to campus, someone who explicitly and obviously does not embody a school's mission. Debate is the stuff of democracy and consequently is totally appropriate at a school where future leaders of our democracy are being trained, a point the inquisitors at the Cardinal Newman Society and other conservative watchdog groups miss. But commencement exercises are different.

Archbishop Charles Chaput of Philadelphia had encouraged Notre Dame to continue its tradition of inviting the president to its graduation exercises. In a column in January, he wrote:

Maybe the best way to amplify and elevate President Trump's understanding of that word "prolife" would be for a premier Catholic university — say, for example, the University of Notre Dame — to invite him to campus to offer its commencement address, to explain his personal evolution on the abortion issue, and to share, listen and learn with a cross-section of students and faculty in a respectful dialogue on the meaning of human dignity.

Notre Dame takes pride in its tradition of welcoming to campus U.S. presidents from both parties and with very different views. In that light, the invitation would certainly make sense and might be fruitful in unforeseen ways. God writes straight with crooked lines.

Chaput, you will recall, said that Notre Dame's decision to invite Obama and confer an honorary degree on him in 2009, and Holy Cross Fr. John Jenkins' introductory remarks on that day, challenged the Catholic identity of the school: "We also have the duty to oppose him [Obama] when he's wrong on foundational issues like abortion, embryonic stem cell research and similar matters. And we also have the duty to avoid prostituting our Catholic identity by appeals to phony dialogue that mask an abdication of our moral witness." Prostituting? Really?

I supported Notre Dame's decision to invite Obama in 2009. It seemed morally obscene to me that you would not invite the first black president in our nation's history. Yes, Obama's views on abortion rights are antithetical to a core moral commitment of the Catholic church, but his views were, sadly, not out of the mainstream of the American people or even many American Catholics.

Despite all the brouhaha from the right, Obama was not an extreme left-winger about anything. Some of his policies were divisive, but the man was not. And he respected the cultural norms that make democracy possible.

Presidential historian Douglas Brinkley told The Washington Post: "Having the president be your commencement speaker is usually winning the big prize, but in the age of Donald Trump in the White House, it might be an albatross around the university's neck."

Instead of the adverb "usually" I would say "normally." And the best reason not to invite Trump to be Notre Dame's graduation speaker is that such an invitation would help normalize this man's presidency, which is a threat to democracy itself.

It is not this policy or that, even a very important policy like abortion, that makes us Catholics recoil from Trump. It is the hatefulness and the fear, the use of that hate and that fear as a political tool, the attack on civil servants and the press, the fabrication of information and willful distortion of facts (this last to a degree never seen before in a city like Washington, where at least a bit of distortion is quite normal). All these are too reminiscent of early stage fascism for us to treat Trump as normal. And inviting Trump to deliver the commencement address at Notre Dame would have been an act of normalization.

I am no fan of some of the views advocated by the vice president. Had Mitt Romney been elected president, or even Ted Cruz, I would be worried about the policies they might enact. But I would support Notre Dame inviting any of these men to receive an honorary degree and address the graduates in part out of respect for the office of the presidency and in part because a difference of opinion should not prevent us, especially at a university, from welcoming the chief magistrate of the land.

But Trump is something else, an existential threat to our democracy. If you respect the office of the presidency, you recognize his occupancy of that office as an aberration, and respect it by doing your best not to normalize his occupancy of that office. Just so, Notre Dame was right to keep him far from the stage at their commencement exercises.