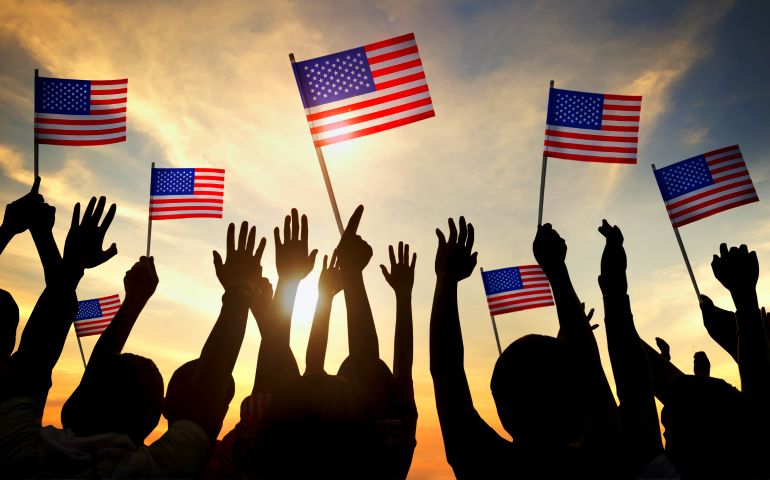 Who are we? What does it mean to be an American? What kind of nation have we become?

These are the questions I posed yesterday in arguing that President Donald Trump's sweeping and draconian executive orders regarding immigration and refugees touched a deep chord of national identity. We have Trump's dark, Manichaean answers to those questions, and we also have different, more inclusive and hopeful answers in the faces of people who spontaneously headed to the airports to welcome foreigners and protest the president's actions.

But a protest does not amount to much unless it becomes a political and moral force. What shape should that opposition take?

Politically, the first line of opposition should be from congressional Republicans who know better, who do not have Steve Bannon whispering into their ear about the salutary effects of populist nativism, and who have made their careers championing values that Trump is throwing out the window.

It has been shocking to see so few Republican leaders raise their voices publicly in opposition: Sen. John McCain and Sen. Lindsey Graham spoke up, as did Congressman Charlie Dent, but where was Speaker of the House Paul Ryan? Where was Senate Majority Leader Mitch McConnell? They applauded the president's executive orders. They are now wedded to this president and will sink or swim with him. Given Trump's dismal poll numbers, the smart money says they will sink. Let it be so. Of course, before the election, Trump's poll numbers were lower than Hillary Clinton's, and the smart money said he was going to lose.

I was heartened by the sight of Democratic lawmakers joining the protests at the airports this past weekend. The denial of asylum to refugees fleeing violence and war, sometimes wars that the U.S. has started or abetted, is an affront to our nation's history and values to be sure. This assault on the dignity of Muslim refugees is appalling.

But I could not help thinking that some of the people who voted for Trump, having voted for President Barack Obama twice, looked at the outrage and posed the same question they did when the Obama administration insisted that transgender bathroom rights was a major civil rights issue of our time, or when Obama lit up the White House in the colors of the rainbow flag when the Supreme Court legalized same-sex marriage: When will you show any passion about our vanishing manufacturing jobs, or our stagnant wages, or our homes in danger of foreclosure?

The Democrats desperately need to craft an alternate vision to that being peddled, and implemented as government policy, by Trump, and that vision must not only be inclusive and hopeful, it must be majoritarian. It must be as outraged at the deportation centers holding Mexicans as the denial of entry visas to Muslims, and as concerned about the jobs of rural Americans as about the rights of refugees. Why did it never occur to a Democratic president to publicly shame companies that export jobs?

The Democrats must put forward a vision of good governance, one that does not accrue all decision-making authority in Washington but respects some measure of local diversity, even when the locals decide to act in a way that is contrary to a Democratic interest group.

I have yet to hear a Democratic politician make a major speech that establishes a moral framework for our economic decision-making. Indeed, I have yet to hear a Democratic politician pick up on a foundational moral point made in these pages by Richard Trumka, president of the AFL-CIO, namely, that we are told that we live at a time of scarcity when, in fact, we live in the richest country in the history of the world. There are consequences for structuring a political program that assumes scarcity as a given, as Trumka explained, and there is a politics that such ideas evoke. Democrats must confront the politics of scarcity head on. So far, they have not confronted it at all.

The Democrats must also step away from the technocratic paradigm that has influenced their philosophy of government since 1992. In analyzing Bishop Robert McElroy's talk at the Erroneous Autonomy conference, most commentators focused on his indictment of market ideology and an erroneous understanding of nationalism. But if Hillary Clinton had won the election, I suspect the focus would have been on his indictment of the technocratic paradigm. It should be required reading for all Democratic candidates, speechwriters and strategists.

The Democratic opposition must look for specific ways to reach out to rural Americans whom they have neglected, and they must find a better way to deal with interest groups that do not speak to the common good. They must not be afraid to say at a Black Lives Matter event that "all lives matter." (Want to tie a Democratic politician in knots? Ask if unborn black lives matter.) They must continue to defend the rights of minorities, but they must care about everyone too.

They are entitled to maintain their vigorous commitment to abortion rights, but they must stop stigmatizing those of us who do not share that commitment. They need to stop sounding like snobbish academics, talk to people who don't read The New Yorker or watch Rachel Maddow, people with real economic concerns the GOP will not address. They must craft a communitarian vision that stands in sharpest contrast to the vile "winners vs. losers" framing that Trump applies to all he sees.

Teach what the church teaches

How to oppose Trump's policies is a question for the Catholic church as well: We cannot move from a culture war on the right to one on the left. Catholic leaders should speak in terms of inviolable principles, not attack the president personally. When Vice President Joe Biden presided over the same-sex marriage of a longtime staffer, the president of the U.S. Conference of Catholic Bishops at the time, Archbishop Joseph Kurtz of Louisville, Ky., was quick to issue a statement criticizing the action, in part, because Biden is a Catholic. I don't suppose we shall see a similar calling out of Speaker Paul Ryan for supporting these horrendous executive orders. Bishops should not get into the muck of calling out politicians by name: Leave that task to us bloggers.

The bishops must shine a light on the human dimensions of the issues that are at stake. It would have been nice to see a bishop show up at their local airport this past weekend, but it would not be nice to see a bishop sounding less like a pastor and more like a political analyst in their diocesan columns. They should seek to be evenhanded, finding ways to balance the range of moral concerns a Catholic faces in the public arena, being as pro-undocumented as they are pro-life.

Most especially, the bishops should teach what the church teaches. The old joke is that Catholic social doctrine is the "best kept secret" of the Catholic church. It is time for the bishops to take the lead in making that doctrine the stuff of sermons and adult faith formation and Catholic education at all levels, especially our seminaries.

In a statement earlier this month, Bishop John Stowe of Lexington, Ky., spoke out against a proposed "right-to-work" bill in that state. Stowe, a Conventual Franciscan, was not only right on the issue at hand, but read the first paragraph of his statement, how he introduces the church's social doctrine, its sources in Scripture and tradition, and its ongoing relevance. It is masterfully done.

I have said it before and shall say it again: There is no problem facing America that is not leavened by Catholic social doctrine.

And if the political opposition is smart, which is a big if, they will avail themselves of the moral and intellectual framework Catholic social doctrine provides. The overlap between that doctrine and Trumpism is nonexistent. The language of Catholic social doctrine provides coherence and it appeals to the better angels of our nature. Franklin Delano Roosevelt quoted from Pope Pius XI's magnificent social encyclical Quadragesimo Anno when he ran for president in 1932, and the ideas the pope put forward shaped the thinking and the way of speaking about the New Deal. Today's Democrats could do worse.

Who are we? The answer the opposition formulates must include more than the usual hodgepodge of interest groups, but accompany everyone whom our society leaves on the side of the road. The answer must speak to the better angels of our nature. The answer must move beyond anger and rage as the default responses to political challenges and seek reasoned debate in which other people's differences of opinions do not make us see them as the enemy. The answer must address people's fear and seek to find common ground, to cultivate a culture of encounter, between those who are afraid and those they have been told to fear.

Do you see the themes the Holy Father is articulating here? Accompaniment. Dialogue. Encounter. These will yield the humane answer to the question — who are we? — that so many seek.

Justice | An opposition in search of an alternate vision

The Laetare Award: Dismantling the architecture of the culture warrior church