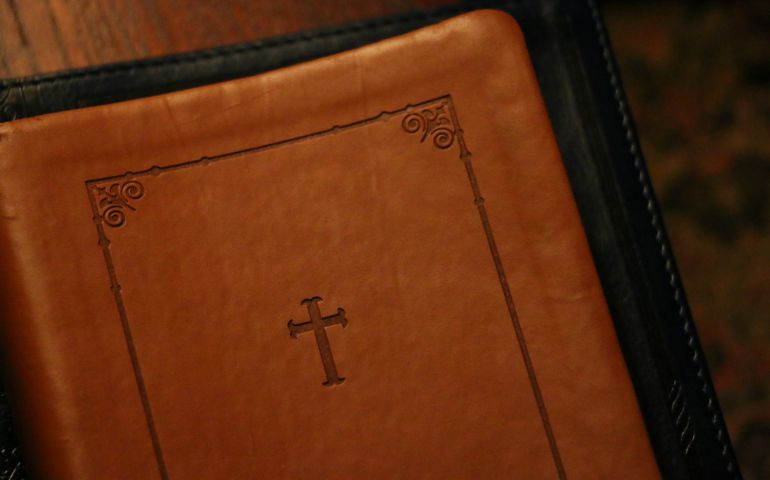 Is it fair to consider a politician's religion in evaluating their suitability for office? We all think we know the answer to that question: No. The Constitution distinguishes between church and state, but it sets no limits on what voters can consider when they enter the voting booth. Still, the Constitution springs from, and furthers, a set of values, and one of those values is to keep religion and politics far apart.

Sen. Marco Rubio has been tweeting Bible verses, almost all from the Hebrew Scriptures, and most of them from the book of Proverbs, and I think this episode, and others, invites us to re-think our sweeping judgment that questioning how a person's faith affects their ability to function in the public sphere is necessarily bigoted or wrong-headed. De facto, we now have a situation in which idolatry rules the day, as politicians drape themselves in religion when it suits their purposes, turning religion, which should be foundational, into window dressing.

How did we get to this point? History contains many lessons, but the harvesting of those lessons requires a person to engage history critically. It is not math, in which 2 plus 2 always equals 4. History requires interpretation. Even the decision to look for a lesson in one decade or year, as opposed to a different decade or year, illustrates the degree to which the purveyor has as much to do with determining how history will be applied as the historian. And one of the most common uncritical mistakes the purveyor can make is to over-learn a lesson.

We Catholics in the U.S. look back at the election of John F. Kennedy as a watershed moment because, at long last, our religion was no longer counted against us in the public square. In the 19th century, there had been the antebellum riots against Catholics and then Blaine Amendments after the war. In 1928, Al Smith had lost his presidential bid with only 87 electoral votes to Herbert Hoover's 444, largely because of Smith's Catholicism. But with Kennedy's win, Catholics could feel that our religion was no longer a stumbling block to full citizenship.

In the 1960 race, Kennedy had apparently lanced the boil of anti-Catholicism with his famous speech to the Greater Houston Ministerial Association, the high point of strict separationism. "I believe in an America where the separation of church and state is absolute — where no Catholic prelate would tell the president (should he be Catholic) how to act, and no Protestant minister would tell his parishioners for whom to vote," the candidate said. "Where no church or church school is granted any public funds or political preference — and where no man is denied public office merely because his religion differs from the president who might appoint him or the people who might elect him." He went on to allow that if his office required him to violate his conscience, he would resign.

I do not support religious tests for office, to be sure. But it seems to me we have a right to know something about a candidate's worldview; and for most people, most of the time, the values upon which their specific policies rest are rooted in some religious belief. Why would we not want to know about that? I can see the danger, how sectarianism could infect our politics as it did in 1928 when Protestants were warned that Gov. Smith was going to take away their Bibles!

Certainly, if someone is going to invoke Scripture as authoritative, as Sen. Rubio is doing, we in the public have a right to ask questions about his faith. Rubio, like Vice President Mike Pence, is not entirely clear about the development of his religious ideas. Neither man has written an apologia pro vita sua in which we could trace the developments in them that led them to leave the church of their birth, the Catholic Church, and worship at an evangelical church. But are we entitled to inquire, or is it wrong to even contemplate their reasons for leaving one denomination for another as being thoroughly non-germane to their public duties?

In a situation like that of Sen. Rubio, we must ask questions. I was thrilled to see that Politico turned to a Jewish biblical scholar to examine the significance of the senator's choice of tweets. Prof. Joel Baden observed:

Some of the statements in Proverbs look strikingly similar to those made by modern-day conservative policymakers. Take, for example, Representative Mo Brooks (R-Ala.), who, arguing that poorer people should pay more for health care, recently said, “Those people who lead good lives, they’re healthy.” It’s not quite a direct quote from Proverbs, but it’s not too far from these: “The Lord does not let the righteous go hungry” (Proverbs 10:3) and “A slack hand causes poverty, but the hand of the diligent makes rich” (Proverbs 10:4). In short: Proverbs is probably the most Republican book of the entire Bible.

But Proverbs is not the only book of the entire Bible. Why is it not fair game to throw back other texts, as the professor does, to challenge the senator's right to cloak himself with the authority of the Bible?

Catholics in public office have a more difficult time avoiding such questioning precisely because the Catholic Church has a body of social doctrine that is the result of centuries of reflection and application. We also have authoritative interpretations of certain scriptural edicts. Protestants all are agreed about the authority of the Bible, but there the agreement ends: Each believer is entitled to make of the Good Book what he or she thinks best, and even those Protestant denominations with a more hierarchical structure allow a much wider latitude for interpretation than we do in the Catholic Church. If a friend told me she was running for office, and I cared not a whit about her eternal soul, I would tell her to become a Protestant.

The problem for Catholics is not so much with the politicians as it is with those members of the laity (and some few clergy) who serve as self-appointed watchdogs of Catholic identity but twist and turn Church teaching in shocking ways to achieve the result they want. Take Bill Donohue of the Catholic League. He is not the sharpest knife in the drawer, and in this video of an appearance on a right-wing talk show, he manages to confuse a theological category (intrinsic evil) with a rhetorical category (non-negotiable), and applies both indiscriminately to achieve his desired conclusion: You can ignore Pope Francis when he is talking about economics, the environment or the death penalty, but you need to pay him heed when he is talking about abortion and euthanasia. Never have I seen such a brazen example of cafeteria Catholicism.

Our culture is clumsy when it deals with first and second principles, if it deals with them at all. You regularly hear people assert that they "believe in science" when the whole point of science is that it offers demonstration and, just so, does not demand belief. But, our default belief that it is wrong to question a politician's faith needs some rethinking, at least as long as politicians like Rubio are going to commit idolatry, turning the authoritative Word of God into window dressing for their political ideology.