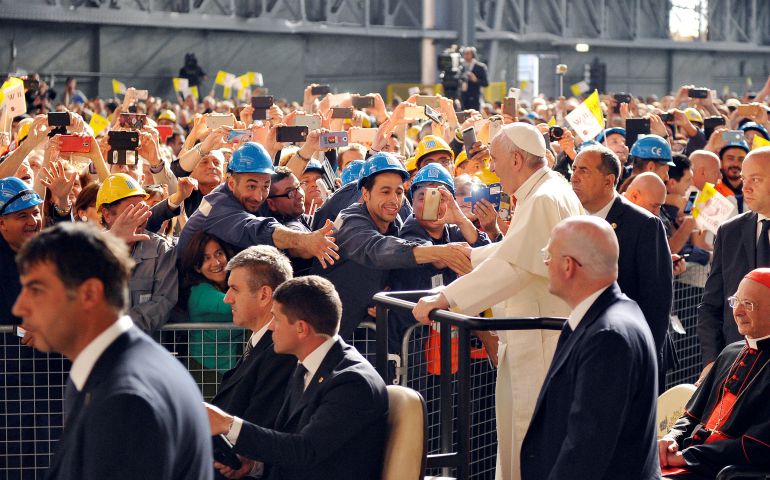 Pope Francis made a one-day trip to Genoa this past weekend, and he began his journey at a meeting with workers. They submitted questions to the Holy Father in advance because he said he wanted time to think through the answers because the subject of work is such a priority in our day.

I would like to highlight three of the things the pope said, although the entire text is rich with insight and solidarity. First, the pope said:

One of the illnesses of the economy is the progressive transformation of entrepreneurs into speculators. Entrepreneurs must never be confused with speculators, they are two different types. The speculator is a figure similar to what Jesus in the Gospel calls mercenary, in opposition to the good shepherd. They see companies and workers only as means to profit, they use companies and workers to make profit, they do not love them. They don't consider laying-off, shutting down, relocating the company a problem, because speculators use, exploit, eat people and means for their own profit.

I especially like the way Pope Francis explicitly brings in the biblical imagery of the good shepherd. But I want to register a slight disagreement with the way Pope Francis frames this. It is not a matter of good people versus bad people so much as it is an economic system that encourages anti-Christian attitudes, values and behavior.

Champions of the free market tend to argue that if people bring the correct values to the marketplace, all will be well. For them, ethics is always an add-on, it is never intrinsic. But the system demands a different kind of behavior and a different set of attitudes from those we see in the Gospel. Today's capitalism does turn "entrepreneurs into speculators" as Pope Francis said. The system coerces people into acting in a cut-throat way even if they would like not to do so.

In response to another question, the Holy Father said, in part:

Dialogue in workplaces is no less important than that in parishes or in solemn conventions. The places of the Church are the places of life. Someone may say: why is this priest coming here to tell us these things, why doesn't he do it in the parish! No, we are all the people of God… . The world of work and humankind go hand in hand. Through work, men and women are anointed with dignity. The whole social pact is built around the world of work. When there is little or no work, or it is poorly performed, then democracy starts falling into decline, the whole social pact starts falling into decline.

It is always odd to me that some of our conservative friends believe the church belongs in the bedroom dispensing advice but should be silent in the board room. Also odd that the left welcomes the introduction of ethics into the world of business but thinks sexual relations are "personal" and beyond the reach of the church's concern. No, human dignity is implicated in the decisions made in both rooms, and for the Christian, human dignity is always rooted in what has been revealed to us in Christ Jesus, in whom we discern our true vocation as children of God. The vocation is prior, ontologically, to whatever professional vocation we adopt. You can tell if the Christian vocation is being lived by attending to the way a person exhibits human dignity and enhances the dignity of others. And, as the Christian vocation calls us to be concerned about the common good, the pope reminds us that when workers are attacked, democracy will suffer. Bishops should remember that if the GOP legislatures in their states mount an attack on unions.

The final passage I should like to emphasize is this. The pope said:

The emphasis on competition is not only an anthropological mistake, but also an economic mistake because it forgets that an enterprise entails mutual cooperation. When competition between workers is systematic, perhaps there will be some advantage in the short term, but it will end up undermining the fabric that is the soul of every organization. Therefore, when the crisis strikes, the company breaks apart and implodes, because there is no rope that holds it together. This competitive culture is a mistake; it is a vision that needs to be changed if we want the enterprise, the workers and the economy's best. Another value, that is actually a disvalue, is meritocracy, which today is so praised and fascinates a lot. Beyond the good faith of many who invoke it, meritocracy is becoming an ethical legitimacy of inequality. Through meritocracy, new capitalism gives a moral dress to inequality by interpreting people's talents not as a gift but as a merit, determining therefore a system of cumulative advantages and disadvantages. The poor [are] considered undeserving, and therefore guilty. And if poverty is the poor's own fault, then the rich are exonerated from doing something about it. This is the old logic used by Job's friends who wanted to convince him that he was to blame for his misfortune, but this is not the logic of the Gospel and of life. Meritocracy in the Gospel is found in the figure of the older brother of the prodigal son who despises his younger brother and thinks he must remain a failure. The father, however, thinks that no son deserves the acorns of the pigs.

This is very, very important. I do not think I have seen anyone challenge meritocracy so directly. The forgetting of cooperation in the rush of competition puts me in mind of something that David Schindler wrote in his book, Heart of the World, Center of the Church, "a self that first (ontologically, not temporally) serves the other, and thereby finds itself, is not identical with a self that first seeks itself, and thereby serves the other. A selfishness become mutual is not yet mutual generosity." A bishop friend tells me he frequently wrestles with how we can better link the church's social doctrine with a theology of grace. Here is the core, in an understanding of the Incarnation, and theologians smarter than I am  need to explicate this further.

One wag who read the pope's talk asked if I was ghost writing for the pontiff. I am not. But I will say this. A few years back, I debated Fr. Robert Sirico, founder of the Acton Institute. Reading the pope's words in Genoa, I could not help but feeling affirmed in my arguments against the libertarian economics Sirico celebrates — and not just Sirico but an increasing number of prominent Catholics associated with the Napa Institute or the Acton Institute or various business schools or most chapters of Legatus. I leave it to the reader to judge if I am right in thinking the Holy Father's views and my own cohere more than either of our thinking does with that of these libertarian economists. I said at that time:

Let us look at the behavior the market requires. What values does it celebrate? Who are its heroes? The market celebrates the self-made man, not the man who evidences solidarity. The market, drenched in Calvinistic roots, celebrates frugality and thrift, not gratuitousness and generosity. The market requires self-assertiveness, not self-surrender. The market is all about activity and not at all about contemplation. The market evidences competition not cooperation… . Let us state it very clearly: There is nothing protean, nothing self-made, nothing frugal or thrifty, nothing self-assertive, nothing competitive, nothing greedy or self-interested in the lives of Jesus and his Mother. The personal characteristics the market demands and champions are not discernible in the life of him who is most obviously characterized by his radical submission to the will of his Father, nor in the life of his Mother. This is deeper than ethics. It gets to the very stance a human person takes towards reality. If you get this wrong, you tend to get everything wrong, which is why Pope Pius XI famously referred to libertarian economics as a "poisoned spring." Libertarian economists get self-interest wrong, as mentioned, by trying to wiggle it into a virtue. They get ideas about the common good wrong, about the universal destination of goods, about our obligations to the environment, about the need to change established Western lifestyles.

I do not know if bishops attend the annual Acton summer event, but plenty of bishops will be on hand for the Napa Institute event this summer. I have no objection to bishops' hanging out with a bunch of dissenters, but let us be clear: Those who continue to claim there is some way to baptize the free market as it is experienced today are dissenters, pure and simple. This text the Holy Father delivered to the workers in Genoa puts the lie to their capitalist agenda. ​