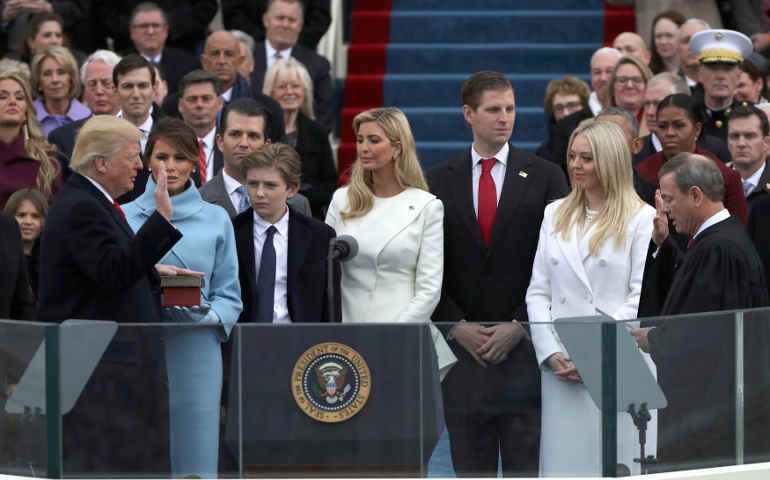 The inauguration ceremonies are completed: Donald Trump is now the president of the United States.

It is difficult to write those words because they still seem so improbable. The new president was the center of attention, yet he seemed oddly out of place, just as it was strange seeing him on the debate stage last autumn. But that is precisely what appealed to just enough voters in just enough states to catapult this man into the Oval Office. He promised change, so that fact that he doesn't seem to fit in may prove an asset, at least for a while.

Inaugurations are the closest thing our country's civic religion has to a High Mass. The trappings of the day are designed to convey tradition, continuity amidst change, sobriety in an often chaotic culture (an observation that could have been made at any previous inauguration because Americans pride themselves on a certain unruliness), and, most of all, legitimacy. It is this last which Trump obviously craves. His inflating his margin of victory, his denial of Russian interference, his nasty tweets directed at Congressman John Lewis, all evidence a deep insecurity about his legitimacy. Losing the popular vote by nigh to three million votes will do that to a person, although you don't need a psychology degree to recognize that Trump's insecurities are of less recent vintage.

At the concert on the steps of the Lincoln Memorial Thursday evening, Trump suggested that he was the first to host such a concert. He wasn't. Why does he insist on stomping on his own moments of achievement by overstating their significance? At Politico, they compiled a list of 82 untruths Trump has spoken or tweeted since his election, and it is astonishing how many of them are exaggerations of his own importance, as if becoming president were not enough, or needed explication. They stopped counting at 5 p.m. Thursday and need to start up again.

The president's inaugural address was relatively short and astonishingly pungent. The rhetoric from start to finish was the language of populist anger. "Today's ceremony, however, has a very special meaning because today we are not merely transferring power from one administration to another or from one party to another, but we are transferring power from Washington, D.C., and giving it back to you, the people," Trump said. He blamed "a small group in our nation's capital" for the travails of the "forgotten" American men and women. There was no significant difference between this speech and his stump speech.

"That all changes right here and right now," Trump said, echoing President Barack Obama's words on election night in 2008. But Obama learned, and the country learned with him, that while "change has come to America," the government doesn't change too quickly. Last night, on CNN, Kirsten Powers observed, "Washington isn't going to just roll over for this guy." No one told him.

The populism grew darker as the speech continued. "Mothers and children trapped in poverty in our inner cities, rusted out factories scattered like tombstones across the landscape of our nation," Trump said. "An education system flush with cash but which leaves our young and beautiful students deprived of all knowledge. And the crime and the gangs and the drugs that have stolen too many lives and robbed our country of so much unrealized potential. This American carnage stops right here and stops right now." At the mention of the word "carnage," you wished he cameras had cut away to the man's predecessors seated behind him.

"The wealth of our middle class has been ripped from their homes and then redistributed all across the world," Trump said without irony, even though millionaire Steve Mnuchin, his nominee to be the next Secretary of the Treasury, was sitting just behind him. Mnuchin made some of his millions by ripping that wealth from the middle class by foreclosing on their homes and parking that cash overseas. I also noticed that, generally, the Republican office holders on the dais seemed to be squirming more than the Democrats. Hmmmm.

Trump exaggerated the significance of his victory: "You came by the tens of millions to become part of a historic movement, the likes of which the world has never seen before." Actually, there were other historic movements the nation has witnessed: Jacksonian Democrats, abolitionism, the women's suffrage movement, the civil rights movement. Trump scanned the crowd, but the National Mall was only filled to the East Wing of the National Gallery of Art. Eight years ago, the Mall was filled all the way to the Washington Monument. He did not possess the self-possession to delete that line on the fly.

There is one movement to which Trump appealed explicitly and it isn't pretty: "From this day forward, it's going to be only America first, America first." On the campaign trail, he would use this line, seemingly ignorant of its ugly historical resonance. Could no one in his family or his political inner circle have pointed out that the "America first" movement was peopled with fascists? I recently ordered The Dark Valley, a history of the rise of fascism in the 1930s and will start reading it shortly. Just in case.

President Trump reportedly turned to the inaugural address of John Fitzgerald Kennedy for inspiration. Kennedy, of course, spoke as a representative of "the Greatest Generation" and he was speaking to a nation in which that generation was still dominant in fashioning the realm of political ideas and deeds. He said he was summoning "a new generation" to the trumpet's call but for people who grew up hearing about Guadalcanal and the Battle of the Bulge, that call resonated with their experience easily. Trump epitomizes the Baby Boomers, a more self-referential generation to put it nicely. The summons to national purpose rings less persuasively in the Boomers' ears: They are more skeptical (not without reason, Vietnam and Watergate being the chief reasons) and more focused on their personal needs and individualistic lifestyle choices. National purpose is not completely absent in Boomer conversations, to be sure, but it has to fight for attention with discussion of the best place for chai lattes.

Donald Trump didn't really try to inspire the country today with his populist rhetoric; he only inspired his base. I had anticipated an effort to speak to shared national values, but his only value is an ill-defined "winning." I had expected Trump to at least try and give a unifying address, that it would reflect the fact that he has won the election, but he only gave another campaign speech. It was odd and sad at the same time.