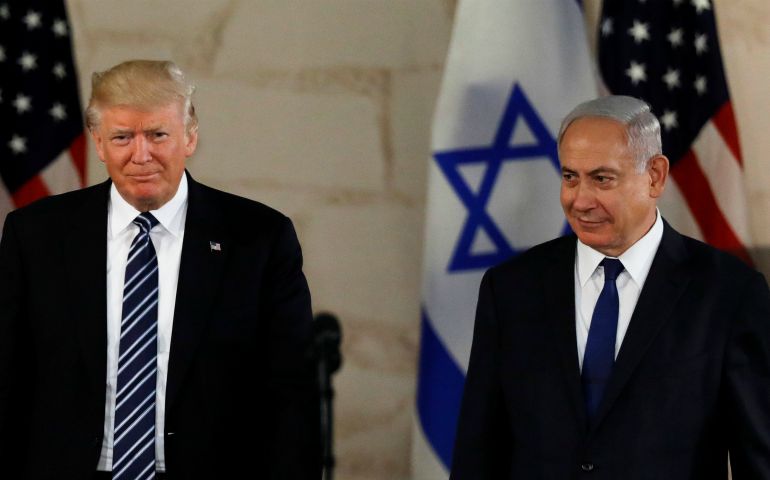 President Donald Trump continued his first trip abroad with a second hero's welcome, this time in Israel. It is hard to imagine two countries less alike than Saudi Arabia and Israel, but both rolled out the red carpet for Trump. Indeed, Trump's flight from Riyadh to Tel Aviv may have been the first non-stop flight to Israel from the oil-rich kingdom.

The most obvious reason for this odd convergence is not a desire for increased amity between the two countries, but a shared enmity. The young Deputy Crown Prince, Mohammed bin Salman, may be forward-thinking in many ways, but he is not planning on starting the kind of diplomatic breakthrough that Anwar Sadat began when he flew to Israel in 1977. Instead, the Saudis and the Israelis have a shared hatred for Iran, and the prospect of Trump taking a harsher stance toward the Shiite government in Tehran is the source of the "pull out all the stops" welcome the president received in both nations.

The Israeli Prime Minister, Bibi Netanyahu, also was prepared to welcome almost anyone after his notoriously testy relationship with former president Barack Obama. (The Saudis, too, were cool to Obama.) In 2015, Netanyahu gave the diplomatic equivalent of the middle finger to Obama when he accepted an invitation to address Congress without the president's approval and where he denounced the Iran nuclear deal Obama had just signed. Longtime observers of the U.S.-Israeli relationship had to look back all the way to the 1956 Suez Crisis to find a lower point in relations between the two allies. Netanyahu clearly likes Trump, but he can't be too pleased with Trump's recent interest in seeking a peace deal. Any viable deal would break Netanyahu's coalition government apart.

During the campaign, Trump sang Israel's praises and promised to move the U.S. embassy from Tel Aviv to Jerusalem. Support for the Jewish state has become a necessity for Republican politicians because the bloc of white evangelical Christians demands it. Their reasons are a bit quirky, and have much to do with millennial theology. The Rev. Jerry Falwell helped rid American conservatism of anti-Semitism in the 1980s when he made support for Israel a central plank of his Moral Majority. Of course, the harshest epithet Republicans can hurl is "socialist," and one wonders if Falwell, or Trump, knows much about the founding of the Jewish state by European socialists!

The political left is not sure how to respond to this. On the one hand, they recognize that Israeli society is more like ours in important ways. So, for example, while several of Israel's neighbors still hold homosexuality punishable by death, Tel Aviv has a vibrant gay community. Israel has an independent judiciary: Arab citizens of Israel have a better shot in the judicial system of the Jewish state than they would in Egypt or Syria or in the Palestinian territories, unless the criminal activity is violence against Jews. Killing Jews still makes you a hero in the West Bank.

On the other hand, if people like Jerry Falwell and Donald Trump are so pro-Israel, that stance must be suspect somehow to professional lefties. You see this ambivalence in an article at ThinkProgress posted yesterday. It is hard to tell if they are criticizing Trump for being the first president to go to the Western Wall, or criticizing him for refusing to be accompanied by Netanyahu. I applaud the president's decision to go to the wall and think the argument about whether it is in occupied territory or not a ridiculous discussion, akin to debating whether Manhattan is occupied territory that might be returned to the Native Americans. Time marches on, and the Western Wall will never be other than a part of Israel in our lifetimes. If diplomatic fictions, such as claiming the president's visit was "private" — as if anything a president does on a foreign trip is really private — allow everyone some wiggle room and prevent people from abandoning negotiations, fine.

The president has repeatedly stated his goal of finding an "ultimate" peace deal between Israel and its Arab neighbors, especially the Palestinians. His bellicosity is directed at Tehran, not Ramallah. As this fine analysis by Ishaan Tharoor explains, Trump is bound to be disappointed in his quest to broker a peace deal, not least because his buddy Netanyahu's interests are served just as well by keeping the status quo.

Beyond the internal Israeli politics, the two-state solution has come up against a different roadblock: There is no real Palestinian state. The president is visiting Mahmoud Abbas, the president of the Palestinian Authority, but his government is woefully corrupt and has failed to deliver a decent life to its people or a realistic peace offer to Israel. Nor does it even have control in Gaza. Other Arab leaders like Abbas and hold him up as a key player, but his unpopularity within the West Bank continues to expand.

It is unclear why Trump brought his scandals with him, telling reporters he never mentioned the word "Israel" in his meeting with Russia's foreign minister and ambassador, during which he reportedly divulged sensitive intelligence. A foreign trip is a chance for a president to escape any difficulties back home, at least for a few days. But our insecure president always needs to make his points, even when reticence would better serve his interests.

Previous presidents have tried and failed to achieve peace between Israel and the Palestinians. They have devoted time, learning and attention to the cause. Trump has not demonstrated an ability to devote attention to anything for more than a few minutes. He may think his deal-making ability is the missing piece of the peace puzzle, and he would be wrong to think that. There are entrenched and irreconcilable issues, interests and histories at stake. Trump and Bibi may be best of friends, and Trump may genuinely get along with Abbas, but expecting a peace deal while these three men are in power is delusional.

Tomorrow, the president heads to the Vatican for his much anticipated meeting with Pope Francis.