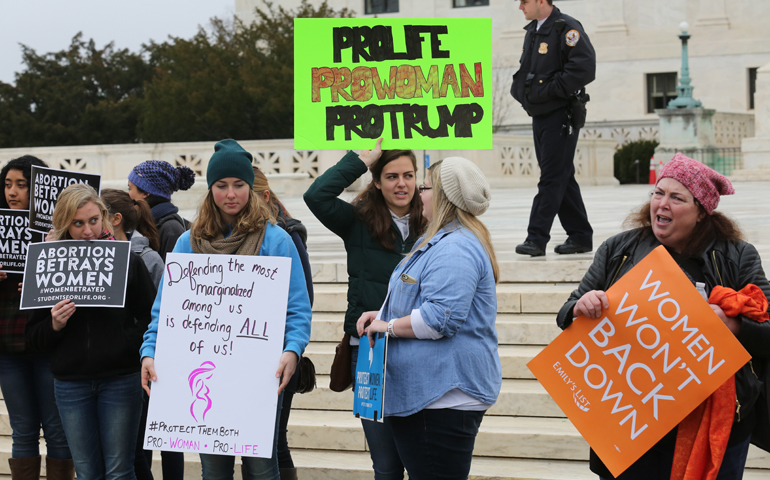 Pro-life supporters gather outside the U.S. Supreme Court next to a participant in the Women's March on Washington Jan. 21. (CNS/Bob Roller)

As tens of thousands of pro-life activists prepare for the annual March for Life, the principals of the pro-life movement are excited. "With a pro-life White House and Congress, our movement is in the strongest position possible to advance historic protections for the unborn," Marjorie Dannenfelser, president of the Susan B. Anthony List, recently stated in a press release.

One of the achievements of the pro-life movement in recent years has been to shed its image as a movement led by a bunch of male, celibate clergy unconcerned with the plight of women. Women have become the face of the movement and bishops have gone out of their way to call attention to the need to care for women facing crisis pregnancies. In recent years, at the annual Mass before the March, Cardinal Sean O'Malley and Cardinal Timothy Dolan placed concern for women at the center of their homilies. A new generation of female and male pro-life voices has been outspoken in confronting the rapes on campus and the "hookup" culture, broadening the focus of the movement in healthy ways. Online magazines such as Millennial have helped forge a distinctively feminist pro-life approach.

That achievement cannot survive a too-close association with the Groper-in-Chief. A pro-life movement that values women cannot, at the same time, find its champion in a man who spoke about assaulting a married woman, and not just spoke, but bragged about it, and did so in the most vulgar terms imaginable. And, unless the pro-life movement remains a place where women are valued, and their concerns are heard, and their crises addressed, the pro-life movement will never, ever succeed in achieving its aims.

It will also never succeed without at least some measure of bipartisan support. Yet, Dannenfelser and the Susan B. Anthony List are tied with Planned Parenthood as the group that has done more than any other to make such bipartisan support impossible. In 2010, Dannenfelser and her organization did not target pro-choice politicians for defeat: It targeted pro-life Democrats who had supported the Affordable Care Act. Susan B. Anthony List charged them with supporting "taxpayer funded abortions" which the Affordable Care Act did not do, although the text of the law did not specifically prohibit it either. The key point, that the law did not provide federal funding of abortion, was clarified beyond ambiguity by President Barack Obama's subsequent executive order on this point, an executive order that was made a condition for obtaining the votes of pro-life Democrats like Reps. Bart Stupak, Kathy Dahlkemper, Steve Driehaus, and John Boccieri. Stupak retired that year, and the other three lost their seats. Driehaus actually sued Susan B. Anthony List over their false campaign ads, but the court dismissed the case, which was by then moot, noting dryly: "Due to the low threshold we have here for a finding of 'truth,' we need not resolve this debate at a higher level of specificity."

Whatever you think about the Affordable Care Act — and Susan B. Anthony List has endorsed the nomination of Rep. Tom Price to lead the Department of Health and Human Services, from which he hopes to repeal the ACA — why would this organization attack pro-life Democrats in the first place? For those who really want to see our culture become a more pro-life culture, so that we are not dependent on the vagaries of the electorate and on presidential executive orders to defend the right-to-life, pro-life Democrats are gold. They are like pro-immigration reform Republicans to those who advocate for humane treatment of migrants and refugees. And, in both cases, wherever you rank the issue on your list of political priorities, anyone who values the common good, which is the aim of all politics in Catholic social doctrine, should embrace those who stand up to their own party on behalf of the unborn and the undocumented.

Susan B. Anthony List is now joining with EWTN to produce a "Pro-Life Weekly" show. Alas, SBA List is not pro-life or it would be opposing the repeal of the Affordable Care Act, which has played no small role in the reduction in the abortion rate to its lowest level in more than forty years. (Don't look for former President Obama to get any shout outs at the march!) Susan B. Anthony List, and EWTN, are pro-Republican first. Same goes for the National Right-to-Life Committee. They are shills for the GOP, nothing more and nothing less.

President Trump has already issued an order barring federal funds to the work of organizations overseas if those same organizations provide abortions. This executive order, which gets reversed whenever the White House changes hands from one party to the other, will get wild cheers on the Mall tomorrow. And, at the margins, it will have a good effect. I watched Cecile Richards, the president of Planned Parenthood, on TV, explaining how the order will hurt women by curtailing vital medical care that has nothing to do with abortion. The interviewer did not follow up and ask, "If that work is so vital, why not stop performing abortions so you can continue to do it?"

Soon, President Trump will nominate a justice to the Supreme Court and that nominee's stance on Roe v. Wade will further polarize the debate on abortion. What if Trump gets two nominees to the high court? What if they repeal Roe? That would kick the issue back to the states where, I fear, a vast majority of the legislatures would enact liberal abortion laws. The pro-life movement has not laid the groundwork for the kind of definitive win they claim to seek. Changing the law won't be enough. The first time a woman dies procuring a back alley abortion, the backlash will be intense. Building a pro-life culture takes time and persuasion and compassion. It is harder than winning control of a legislative chamber or even of the Supreme Court. And, the political expression of a culture of life will be bipartisan or it will be a failure.

Culture and politics should never be confused. This is one of the great lessons one obtains from reading St. Augustine. And, until we in the pro-life movement build a wider and bigger culture of life, one that extends its concerns beyond the unborn to the undocumented and includes concern for the earth which nourishes life for us all, we should be wary of relying on a political fix. You won't hear this concern at the March because pro-life officialdom has thrown in its lot with Donald Trump and the party he now leads. It is a shame. But, the real work of building a culture of life remains and those of us who recognize abortion as the infamy it is must do our part.