Star of wonder: thoughts on the feast of the Epiphany 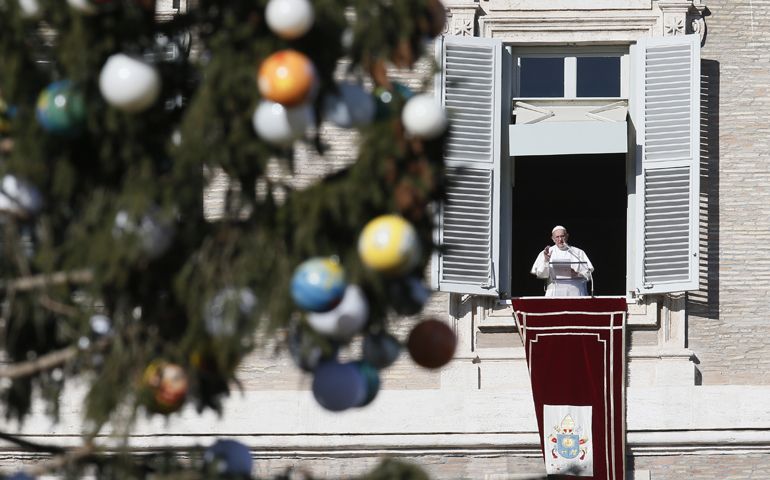 Pope Francis leads the Angelus from his studio overlooking St. Peter's Square Jan. 6 at the Vatican, the feast of the Epiphany. (CNS/Paul Haring)

The Epiphany, like Advent, has usually gotten short shrift in the U.S. I think the first time I really grasped the meaning of the word was reading Portrait of the Artist as a Young Man! In Puerto Rico and some other Latin nations, the Dia de Los Tres Reyes Magos is as big a celebration as Christmas. We should learn from our neighbors to the South in this regard, as in so many others.

In the Eastern Church, the origins of the holiday are tied in with the Lord Jesus' Baptism. In the West, where the feast developed later, the emphasis has been on the story of the visit of the Magi, and the implication that their visit foreshadows the mission to the Gentiles. And, this idea, that from its very inception, Jesus' birth was grasped as a significant event through a natural sign, the star, but that the Magi still needed to consult the Hebrew Scriptures to find where Jesus was born, this idea is worth a bit of reflection.

"The truth is that only in the mystery of the incarnate Word does the mystery of man take on light. For Adam, the first man, was a figure of Him Who was to come, namely Christ the Lord. Christ, the final Adam, by the revelation of the mystery of the Father and His love, fully reveals man to man himself and makes his supreme calling clear." These beautiful and sonorous words open the 22nd chapter of Gaudium et spes. They were also the text of Vatican II most quoted by St. Pope John Paul II. They were penned by Henri de Lubac who, of course, had been silenced in the 1950s for such thoughts.

It is easy enough to see what these words have to do with the star of Epiphany and the Magi. De Lubac did not deny the old axiomatic characterization of the relationship between grace and nature, that "grace perfects nature," as he pointed to its incompleteness. Grace is evident in nature. "The Son is the image of the invisible God, the firstborn of all creation. For in him all things were created: things in heaven and on earth, visible and invisible, whether thrones or powers or rulers or authorities; all things have been created through him and for him," St. Paul wrote to the Colossians.

I am no de Lubac scholar, but it seems to me that these passages question the continued centrality of natural law in Catholic theological reflection. My first suspicion of natural law was different: It has too often been invoked by its defenders as a means for creating a common moral language, irrespective of denominational and theological perspectives, but they usually did not use it that way. They used it to beat other people over the head. But, it seems to me that the challenge set forth by Paul, and by Vatican II, and by the feast of the Epiphany is deeper. Can Christians ever set aside our denominational and theological perspectives without distorting not only our theology, but misunderstanding nature itself? If all creation is created "in Him" and "through Him" and "for Him" then any examination of nature must disclose His presence and His grace.

There is a hyper-teleology to natural law thinking that also tends to obscure the contours, and often the difficulties, of life. That is why a phrase with a precise, natural law significance like "intrinsically disordered" is such a disaster pastorally. And, if St. Pope John Paul II made Gaudium et spes 22 the basis for his theological anthropology, Pope Francis is reminding us that too much abstract concern for teleology can turn Christian ethics into an ideology. My sympathy with Communio theologians is profound, but every once in awhile they take a natural category, usually related to gender, and make something coarse and unbending out of it, and it also becomes even more pastorally ineffective by investing that natural category with a too precise calculation of its divine significance.

By contrast, look at Pope Francis' homily last Sunday on the feast of Mary, the Mother of God. He invokes motherhood a lot as a metaphor for the church he wants us to create. This is the heart of the revolution in tenderness that he is calling forth from Catholics at all levels of the church. It is, in one sense, a deeply conservative project, as the image of the church as mother is an ancient one. I have some female friends who cringe when Pope Francis talks about women, especially he uses some of the lively metaphors that are so characteristic of Argentine culture ("the strawberry on the cake!") but I think that we should not miss what he is trying to say. Yes, I know some men and some fathers who are more tender than some women and some mothers. In fact, my mother was the tough one and my dad was the softie. But, it's a metaphor people, so relax, and don't miss the bigger point the Holy Father is trying to make: We, as a church, need to be more tender!

The relationship of grace and nature will continue to occupy the minds of theologians until the Second Coming. But, what de Lubac and the other ressourcement theologians wanted was not so much a yet more stringent and demanding natural law. They wanted to recapture the sense of wonder before God and His creation that was so evident in the writings of the church fathers, a sense of wonder that had been suffocated by the legalistic and stale theology that characterized the Roman school before Vatican II.

Yes, this theological perspective yields consequences for ethics, but only secondarily. First, it yields what we might call a liturgical sensibility, a stance towards God and towards each other in which we are open to God's surprising grace. Consider these words from Pope Francis' homily this morning:

We want to worship. Those men came from the East to worship, and they came to do so in the place befitting a king: a palace. This is significant. Their quest led them there, for it was fitting that a king should be born in a palace, amid a court and all his subjects. For that is a sign of power, success, a life of achievement. One might well expect a king to be venerated, feared and adulated. True, but not necessarily loved. For those are worldly categories, the paltry idols to which we pay homage: the cult of power, outward appearances and superiority. Idols that promise only sorrow, enslavement, fear.

It was there, in that place, that those men, come from afar, would embark upon their longest journey. There they set out boldly on a more arduous and complicated journey. They had to discover that what they sought was not in a palace, but elsewhere, both existentially and geographically. There, in the palace, they did not see the star guiding them to discover a God who wants to be loved. For only under the banner of freedom, not tyranny, is it possible to realize that the gaze of this unknown but desired king does not abase, enslave, or imprison us. To realize that the gaze of God lifts up, forgives and heals. To realize that God wanted to be born where we least expected, or perhaps desired, in a place where we so often refuse him. To realize that in God's eyes there is always room for those who are wounded, weary, mistreated, abandoned. That his strength and his power are called mercy. For some of us, how far Jerusalem is from Bethlehem!

The star of Epiphany is a light, and light reveals what has been dark. But, in the hymn we all sing this feast day, the star is first pronounced a "star of wonder." Before we Christians look to human nature, before we shine the light of the Gospel onto human nature to see what it discloses about our ethical demands, stop and inculcate a sense of wonder and awe. That, for me, is what Epiphany is all about and I wish you all a, literally, wonderful feast.

Star of wonder: thoughts on the feast of the Epiphany