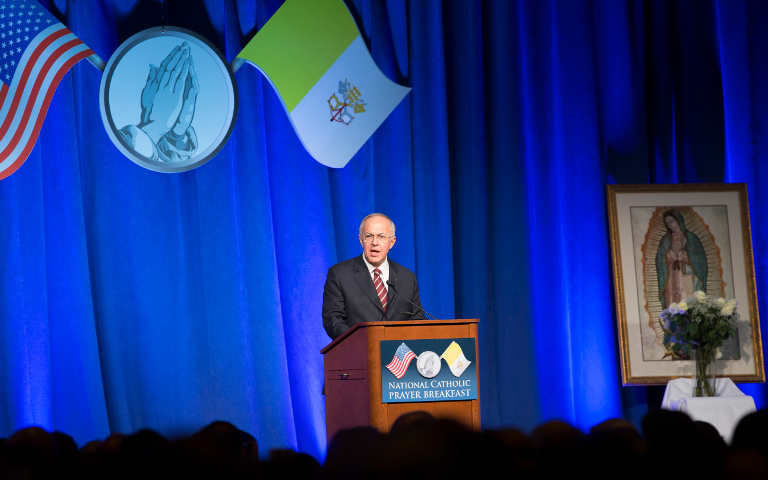 Today, I propose to examine how our Catholic faith might inform an analysis of the Republican Party today. I have already addressed some of the issues raised by the nomination of Donald Trump: the legitimizing of white supremacist thinking and speech, the authoritarian streak, the vulgarity, the lack of concern for religious liberty. Today, I would like to examine the Trump candidacy through the lens of one of the most prominent conservative Catholics in the country: Carl Anderson.

Mr. Anderson, Supreme Knight of the Knights of Columbus, delivered a shocking speech to the Supreme Convention on Tuesday. I say "shocking" because it bore precisely no resemblance to the address Pope Francis made to the U.S. Congress less than one year ago. After listing the many, truly wonderful charitable activities the Knights undertake, Anderson reminded the room of words he had spoken at a previous convention, eight years ago:

Catholics often confront a dilemma in deciding how to vote: Can we support a candidate who may be attractive for many reasons but who supports abortion? Some partisan advocates have sought to excuse support for pro-abortion candidates through a complex balancing act. They claim other issues are important enough to offset a candidate's support for abortion. But the right to abortion is not just another political issue; it is in reality a legal regime that has resulted in more than 40 million deaths. ... What political issue could possibly outweigh this human devastation? The answer, of course, is that there is none. Abortion is different. ... It is time to stop creating excuses for pro-abortion politicians. We will never succeed in building a culture of life if we continue to vote for politicians who support a culture of death. Catholic voters have the power to transform our politics.

Anderson said he still stood by those words but perhaps, as the leader of such a large Catholic organization, he should think about standing by the words of the Holy Father or the U.S. bishops. There is no mention of the environment or Laudato Si'. There is no mention of the unjust treatment visited upon immigrants, resulting in exploitation of undocumented workers, children living in fear of being separated from their parents, and 11 million people forced to hide in the shadows of society. There is an expressed concern for the poor but no mention of government programs that help the poor: Personal charity is a good thing to be sure but does not social justice also make demands on the commonweal? Anderson did not say. There is concern for Christian refugees in the Mideast but not for Christian refugees from Honduras. And, on the issue of abortion, while the GOP platform retains its staunch anti-abortion position, does anyone think the pro-life cause will be furthered if that party's candidate, the vulgarian, narcissist Donald Trump, is elected president? Will Trump build up a culture, let alone "culture of life"?

Anderson also talked religious liberty and the Knights helping to fund the lawsuits challenging the Obama administration's contraception mandate. There were Little Sisters in the room and everyone gave them a rousing ovation. Who doesn't love the Little Sisters?

In a remarkable interview published the day the Supreme Convention began, John Allen, editor of CruxNow.org, which is partly funded by the Knights, referred to the "political savvy" Anderson brought with him to the Knights. Savvy? I pose these questions: How has the pro-life cause been advanced by Anderson's efforts? Has the effort to prioritize abortion above all other issues and demonize those who think differently worked? (I will address the abortion issue at greater length tomorrow when looking at the Democrats.) As for religious liberty, how can anyone mention the threats to religious liberty and neglect to begin with the fact that one of the two people running for the presidency has called for a ban on the migration of all Muslims? Does Mr. Anderson's failure to mention Trump's Muslim ban indicate that his concerns may be less constitutional and moral than partisan and Republican? More broadly, the Knights have helped pay for a particular strategy, developed by Anderson's conservative friends at the Becket Fund and with his conservative friends at the U.S. bishops conference. And, how is that strategy, paid for by this "savvy" political operator, working? When the Republican governor of Georgia (Georgia!) vetoes a religious liberty bill, is the religious liberty brand doing better or worse? When the NBA pulls its All-Star game from North Carolina because of that state's religious liberty law, does Anderson and do the bishops think encouraging state legislatures to pass these laws will succeed in the long-term?

Mr. Anderson is concerned about the Christian refugees fleeing the violence in Syria and Iraq, and that is a good thing. But, does his unwillingness to speak about the refugees, most of them Catholic, fleeing the violence in Central America have not only a partisan bias but a partisan lineage? After all, Mr. Anderson began his career in Washington working for Sen. Jesse Helms who said of General Roberto D'Aubuisson, the man who ordered the murder of Archbishop Oscar Romero, "All I know," he replied, "is that D'Aubuisson is a free enterprise man and deeply religious." Helms, too, kept alive the tradition of racist populism that animates Donald Trump's campaign today. Helms was a champion of the moral majority which distorted the role of religion in American public life. His influence on American culture was almost entirely pernicious.

Let us not hold the political son, Anderson, accountable for the sins of the political father, Helms. Anderson's inability to grasp the proper relationship between morality and politics was on full display in his fight with C. Everett Koop, President Ronald Reagan's Surgeon General from 1982 until 1989, about funding efforts to stop the AIDS epidemic. Koop, who was not a liberal by any stretch of the imagination, understood that the first duty of the government was to address the public health emergency and, just so, avoid stigmatization. Anderson wanted to discuss AIDS in a moralistic context. People were dying, and Anderson wanted to make a point. It was despicable. I have searched for any record of a public apology from him and the others in the Reagan administration who fought to frustrate Koop's aggressive plans to confront the epidemic. I have found none.

When Anderson refers to the Knights as "the strong right arm" of the Church, the emphasis is on the word "right." And, whereas John Allen refers to Carl Anderson's "political savvy," perhaps it would more accurate to refer to Anderson's political baggage. We all have baggage, but why should the entire Catholic hierarchy be saddled with Anderson's particular baggage? Because he has the money? The Knights have the money but the Knights are well advised to seek a new supreme knight who has no political baggage, who knows how to run a charitable organization and an insurance company, but who did not cut his teeth working for a senator or a president.

My principal interest in Anderson's speech, however, is that I fear it is reflective of how many of my conservative Catholic friends will respond to the Trump phenomenon. They will revert to default mode, as if the rise of Trump does not tell us something deeply disturbing about our polity. They will continue to isolate abortion, failing to recognize that such isolation does not persuade those not already convinced. They will ignore the many other claimant moral concerns that should be obvious to all, and which Pope Francis and the bishops have addressed repeatedly. They will ignore the wisdom once exercised by William Buckley when pronounced the John Birch Society unacceptable in conservative circles. Go to the Times today and look at the videos of the Trump rallies. Racism is back. Decent people should have nothing to do with it.

If any serious Catholic is serious about the moral character of this election, I advise them to consult the essays of Michael Gerson the past few months. Gerson is not a Catholic, although he is deeply learned about the Catholic intellectual and moral tradition. He worked for President George W. Bush. He was, and is, a champion of compassionate conservatism and an advocate for a robust role for religious organizations in public life. There, in Gerson's commentaries, you will find someone who has accurately weighed the moral and political values at stake in this election. In Anderson's speech? I am glad the Knights do such great charitable work. But, it is a scandal that they also get involved in politics in ways that frustrate, and do not advance, the concerns of their members and the moral vision of the Church they love.