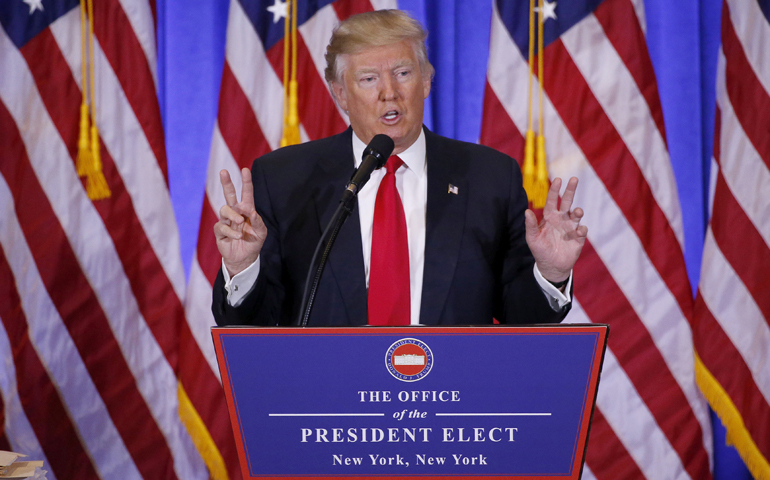 The question of Donald Trump's legitimacy to become president has been raised and deserves to be addressed. It is ironic that the man whose first political love was birtherism is himself now the object of questions about the legitimacy of his presidency. But, irony is not analysis and, in this instance, it is not even helpful.

Donald Trump's presidency, which will officially commence on Friday when he is sworn in, is constitutionally legitimate. He won the Electoral College vote and that is how the Constitution prescribes presidents are to be chosen. Whatever your problems with the Electoral College, the rules of the road were not violated and there was no bizarre court intervention as we witnessed in 2000. The same Constitution that provides for him to be sworn in on the 20th of January provided the path that brought him to that moment. In this sense, his presidency is legitimate.

That said, the Constitution is more than a rule book. Just as some Catholics read church teaching as a checklist, and therefore miss important parts of church teaching like the good of souls, it would be a mistake to say that Mr. Trump's victory confers democratic legitimacy if by democracy we mean more than just who won the most votes in the right states. The Constitution, after all, sets forth a vision of governance, not just procedural rules. It states the purpose of government right up front: "to form a more perfect union, establish justice, and ensure domestic tranquility." It mentions one industry and one only in the Bill of Rights: Not the real estate industry, but the press. Why? Because the founders knew that a free press was a necessary part of the fabric of a democracy, a fact Mr. Trump seems not to acknowledge. The Constitution's changes indicate those parts of our national story in which we learned to be more faithful to the vision, if not the letter, of the document: The 13th Amendment abolished slavery, the 14th demanded equal protection before the law for all citizens, and the 19th extended the franchise to women. Each amendment corrected a previous blind spot and, in the case of the 13th, a moral enormity. The Constitution, then, conveys a sense of the role of government in society and it commends a type of political culture. One doubts that the Tweeter-in-Chief has thought deeply about such things.

Yet, Friday at noon, Mr. Trump will swear to "preserve, protect and defend" that Constitution. It remains to be seen whether Trump will earn this broader, and more vital, sense of democratic legitimacy.

In addition to constitutional legitimacy, even in its fullest sense, a president must acquire a sense of moral legitimacy. The two are not always in sync: The country lived for 77 years between the ratification of the original Constitution which enshrined slavery and the ratification of the 13th Amendment which abolished it. It has been 44 years since the promulgation of Roe v. Wade. In the case of Mr. Trump, the concern is a basic one: The president is vested with an enormous amount of power, and power brings with it a moral responsibility to exercise such power in a responsible manner. The degree of responsibility increases with the degree of power. For all of my disagreements with President Obama, I do not think he was ever flippant or cavalier in the exercise of the powers of his office. In my lifetime, only one president totally failed the test of basic moral leadership, Richard Nixon, and he paid the price for that failure.

When Rep. John Lewis said he did not think Trump was a legitimate president, he cited Russia's meddling in our elections. Trump is lucky the Constitution prescribes a specific oath of office for the president. All other federal office holders take a different oath in which they promise to defend the Constitution "from all enemies, foreign and domestic." One wonders if his tongue would trip on the words. Trump's attempt to dismiss the intelligence reports on Russian meddling is shameful, and is evidence of the kind of moral illegitimacy noted above. But, let's not let the American people off the hook. The Russian government did not tamper with the ballot box. It hacked the Clinton campaign's emails but there was nothing in those emails that disqualified her from office, certainly nothing that made her a worse choice than Trump. Putin was being Putin. We can't put the blame for Trump's election on him. The blame rests with all those conservative commentators, including the archbishop of Philadelphia, who made it seem like the revelations from the Clinton emails were earth-shattering when they weren't.

Indeed, the episode with Rep. Lewis only dramatizes the conundrum the country faces: Trump's constitutional legitimacy is not really called into question by Russian hacking, but his democratic and moral legitimacy are so called into question by the fact that he attacked an icon of American history and the last standing leader of the civil rights movement, and did so in such a childish, unthinking manner. I fear that this will not be the last time that an underlying issue, which might cause a single bad news cycle, is responded to by the new president in such a way that he makes it worse, and worse in kind not only in degree. Watergate, remember, started as a botched burglary.