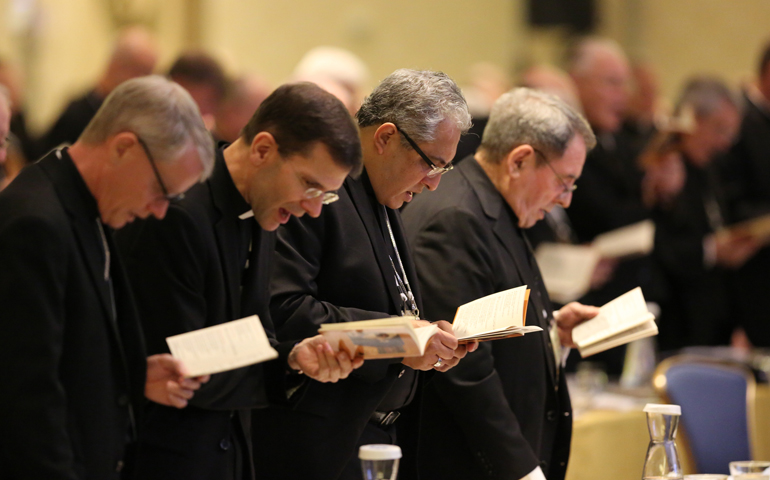 Bishops bow during morning prayer Nov. 15 at the annual fall general assembly of the U.S. Conference of Catholic Bishops in Baltimore. (CNS/Bob Roller)

Watching the USCCB meeting this week was frustrating. The conference seems stuck. At a time when the country desperately needs a strong moral voice, the united voice of the bishops is sidelined, fretting about things that don't matter and tepidly addressing the things that do. And, it was apparent to all that the concerns of Pope Francis are far from the concerns of the USCCB.

In his update to the body on the work of the ad hoc Committee on Religious Liberty, Archbishop William Lori said they were making a difference. Are they? The centerpiece of their campaign, the "Fortnight for Freedom," garners little attention. In the popular press, religious liberty is now usually accompanied by scare quotes. In the popular mind, the cause of religious liberty is linked to discrimination against gays and lesbians, and not without reason. If that will be the faultline for religious freedom litigation in the years ahead, I shudder at the prospects for religious freedom.

I heard almost no mention of the environment or Laudato Si' at the USCCB meeting. Think about that for a minute. The pope issues an encyclical, the only one he has issued so far, and it is dedicated to concern for the environment. And the bishops of the country that has caused more damage to the environment than any other are silent. How is this possible? If they fancy themselves to be pro-life, why are they so unconcerned with one of two threats, the other being nuclear proliferation, that could kill us all? Fighting abortion is a moral thing to do, to be sure, but it makes no sense to defend unborn life so the kids can grow up to live in an increasingly unlivable world. The bishops of other countries are not so reticent. Cardinal Charles Maung Bo of Myanmar gave a recent talk at the Pontifical Academy of Sciences in which he said, "Unless rich countries agree to reduce the global warming, more people will die. This to me is a criminal genocide, when the poor and the weak are exposed violent nature created by unrestricted use of fossil fuels by rich countries." Criminal genocide. And the U.S. bishops can't be bothered.

There is no reason to avoid the political ramifications of the issue, but even if the bishops for some reason were reluctant to engage at that level, why do we need another report on religious liberty activities and no report on what bishops are doing in their dioceses to promote care for creation? I fear the answer is that they are not doing much. Why are our church buildings not installing solar panels? Why are our Catholic colleges and universities not highlighting work creating new technologies that are more environmentally friendly? People like to demean "organized religion" but here is a chance to show what "organized religion" can do, by taking the lead in converting our infrastructure to sustainable energy sources.

There was frequent mention of the charitable work of the church. But, there were no bishops heading to the microphones to denounce the "economy that kills." The U.S. bishops are light years away from where the rest of the church is when it comes to developing an appropriate degree of suspicion about our consumer, capitalist culture. It is easier to attribute the secularization of the culture to gremlins and poltergeists, or to President Obama, than to acknowledge that it is our consumer culture, what Brad Gregory has labeled "the goods life," that is actually the agent of secularization. Why risk angering all those nice donors? Better to invoke the Virgin Mary vaguely than to acknowledge the challenge she posed when she said God would "send the rich away empty."

There was also a lack of discussion, at least in public session, about Amoris Laetitia. At least none of the bishops followed the lead of Cardinal Raymond Burke who, in an interview published yesterday, again asserted that Amoris Laetitia is not a magisterial document. For someone who is so concerned about causing scandal, he sure causes enough of it on his own. If undermining the teaching authority of the pope, to say nothing of the overwhelming majority of bishops gathered in two synods, is not a source of scandal, what is?

And, of course, the biggest immediate issue the bishops face is the prospect of mass deportations of many of our Catholic parishioners. The night before the meeting began, Donald Trump floated the number of people he intended to deport at 3 million. He suggested he was only going after the criminals. If the bishops do not stand up to this bully, and soon, before he gets the wind at his back, before the inauguration, before more people in Washington fall within his power, it will be too late. Throughout the primaries, people said, "He isn't going to get away with saying what he is saying," but he did get away with it. Countless times, people said, "Surely, he has gone too far now," but it was never too far. The annals of history are littered with evidence of well-meaning people and well-meaning clergy thinking that evil people will not really act upon the evil they have promised, and then it is too late to stop that evil. The bishops need to find their voice, and fast. What was said in Baltimore the past two days was totally unequal to the threat a Trump presidency poses to millions of our fellow Catholics. I am not suggesting that we should only be concerned with the plight of Catholics. I am suggesting that if we are not prepared to demonstrate we will protect our own, Trump and his team will get the signal that they can do what they want.

The day before the meeting began, an Episcopal church in Silver Spring, Md., was vandalized. Someone spray painted "Trump nation; Whites only" on the church. The vandals knew what they were doing when they chose a church. They know that the moral vision of the Christian church stands athwart the road of Steve Bannon and his boss. It is not insinuating yourself into politics when your churches are being vandalized. Sadly, I fear the country is about to be morally vandalized, indeed that process has already begun. There is a parable in the Gospel about the need for the night watchman to be vigilant. It is a parable the bishops should take to heart.