What is going on with US bishops' ministry to migrants and refugees? 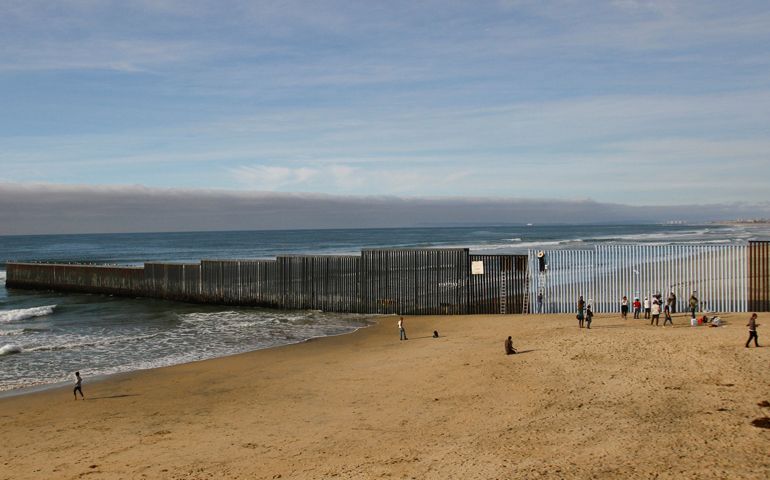 People in Tijuana, Mexico, stand next to a wall separating Mexico and the United States Dec. 10. (CNS/Jorge Duenes, Reuters)

Last Tuesday, in my daily "Links" post, I linked to a video of Cardinal Blase Cupich of Chicago speaking with reporters after saying an early morning Mass for the Feast of Our Lady of Guadalupe. In that video, he mentioned in passing a task force that the bishops had set up, not only to promote prayer but also for "advocacy" on behalf of immigrants. That same day, Cupich published a column in his archdiocesan newspaper that spelled out additional details about the working group.

There was no announcement of such a working group at last month’s meeting of the U.S. Conference of Bishops. There was nothing on the bishops' conference website.

On Wednesday, I called the media relations office at the bishops’ conference and got referred to Norma Montenegro Flynn, who usually handles immigration related questions from reporters and whom I have found previously to be very professional in her interactions with reporters and always well informed and articulate about the goings on at the conference. I asked about the working group and she clearly had no idea what I was talking about but promised someone would get back to me. It struck me as strange that the communications staffer who deals with immigration issues had no idea about this working group.

Equally strange were some of the materials that had been distributed at the conference website for use on the Feast of Our Lady of Guadalupe and for the upcoming National Migration Week Jan. 8-14, 2017. The prayers were innocuous enough, but there was a "sample homily" [see embedded document below] that was shocking. It was poorly written and in desperate need of copy editing. But, worse than that, it sounded like it could have been written by someone working on the Trump transition team. In reflecting on Luke 14, in which Jesus tells us to invite the poor and the lame to our banquets, not the rich neighbors, the author of this sample homily comments:

It does not mean is that we are obligated to invite all of the world’s poor into the country and disregard the well-being of those who are already here. Rather this passage invites us to reflect on the degree to which we, in our surplus, provide to those who live in a state of deficit. Where we are able to provide support and care for the poor and the downtrodden out of our excess, we are obligated to help.

"In our surplus?" I do not recall that line in the Scriptures or in the magisterial teachings of the church. Why not just say we can help the immigrants with "the crumbs from the table" and cite Lazarus! And, we Christians are called to provide for the poor not only out of "our excess" but, like the poor widow who gave her mite, to know that all property has a social mortgage on it.

Finally, after I made repeated calls, on Friday I got an email from Judy Keane, director of public affairs at the conference, answering questions I had submitted by email. Her replies mostly mirrored the letter Archbishop Gomez had sent out "to All U.S. bishops" and which was first reported at Global Sisters Report. And, about the time she sent the email, a Catholic News Service story appeared announcing the creation of the working group.

I followed up with a simple question: "Does the General Secretary stand by the materials sent out for Our Feast of Our Lady of Guadalupe, and specifically the 'sample homily'?" I received no response. I also sought an interview with Archbishop Gomez over the weekend and was told that would not be possible.

So, what is going on here? It may simply be the case that the bureaucracy at the U.S. bishops' conference is incompetent. This isn't the first time the right hand has not known what the far right hand is doing over there. But it is also not the first time that immigration was put on the back burner by the conference staff: In his first presidential address three years ago, Archbishop Joseph Kurtz failed to even mention the issue, which was then being considered by Congress, but he managed to mention the "theology of the body." And, of course, he mentioned religious liberty. While the bishops' conference couldn't manage a half-hour of copy editing for that dreadful sermon, they were producing this video about marriage. When you have someone from Focus on the Family, the very right-wing advocacy group, in a video prepared by the U.S. Conference of Catholic Bishops, you know with whom the conference staff is strategizing.

The suspicion is that the leadership at the conference wants to cozy up with President-elect Donald Trump in hopes of repealing the Obama administration’s contraception mandate and perhaps getting the kind of Supreme Court justice they want. The general secretary knows that the immigration issue also shifts the center of balance among the body of bishops to the political left and all indications are that the key staffers want to keep the bishops’ conference tilting hard to the right.

That suspicion is reinforced by the knowledge that the bishops' conference certainly knows how to cause a fuss for an incoming administration when it sets it mind to it. Eight years ago, as then-President-elect Barack Obama was preparing to be sworn in, the bishops' conference warned Catholics and all fellow citizens about the danger posed by Obama’s pledge to sign the Freedom of Choice Act (FOCA). Obama's pledge was boilerplate Democratic nonsense, and FOCA had never gotten out of committee, and showed no sign of doing better in 2008. That did not prevent the bishops' conference from issuing press releases, distributing bulletin inserts, and starting a postcard campaign for Catholics to write their members of Congress.

Any bishop can visit virtually any Catholic school and talk to the Latino children and he will discover how scared they are. The bishops sat in St. Matthew's Cathedral last year, and Pope Francis talked to them about the importance of supporting immigrants. He also said the same thing to Congress. But, hey, if what you really care about is overturning the contraception mandate, do the least possible to stand up to Trump on immigration. And that is exactly what the bishops’ conference appears to be doing. It will be up to Archbishop Gomez, newly elected vice president of the bishops’ conference and chair of the working group on immigration, to exercise some leadership if he wants the senior staff at the conference to take the plight of migrants seriously, and undertake some advocacy to accompany the prayers.

Politics | What is going on with US bishops' ministry to migrants and refugees?