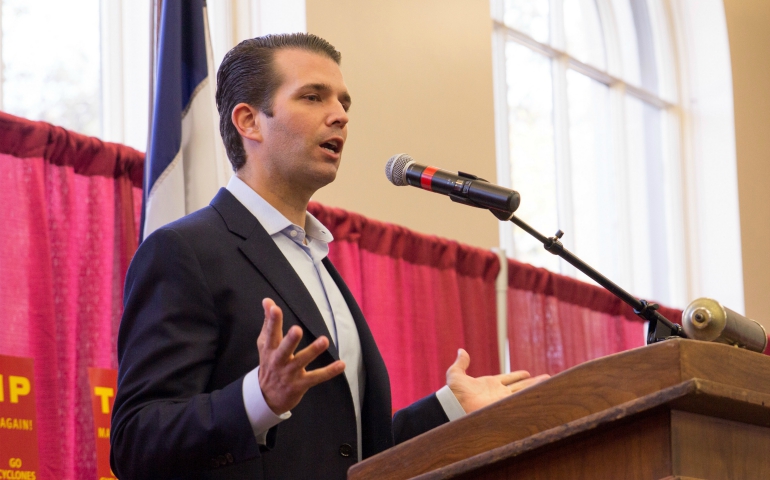 Donald Trump Jr. speaks at a campaign rally for his father in Ames, Iowa, on Nov. 1, 2016. (Wikimedia Commons/Max Goldberg)

"Thou shalt not bear false witness against thy neighbor," reads the Eighth Commandment.

"Honesty is the best policy," we all learned from Poor Richard's Almanack.

"I cannot tell a lie," affirmed young George Washington when he confessed to having chopped down the cherry tree.

The injunction against lying enjoys both religious and secular sanction. Yet, of course, we know that we all lie at times, and we almost expect it from our politicians.

In 1976, the first presidential election after the resignation of Richard Nixon on account of the Watergate scandal, candidate Jimmy Carter promised the American people he would never lie to them. Reporters once asked his dear mother, Miss Lillian, if her son had ever lied.

"I am sure he has told a white lie before, but I can't recall him telling a black lie," Miss Lillian told the journalists. They protested that a lie is a lie, and asked Miss Lillian if she could define what she meant by white lie.

"I am not sure I can give you a definition, but perhaps I can offer you an example that will explain what I mean when I say 'white lie.' A few minutes ago, when you all came to my front door and I said how happy I was to see you ..."

The revelation that Donald Trump Jr. met with a Russian lawyer whom he was told was linked with the Russian government, and that she wanted to provide damaging information against his father's election opponent, Hillary Clinton, is closer to the kind of lies Nixon told than the kind of lie Miss Lillian told. In fact, it may even be worse, involving as it does a willingness to work in collusion with a foreign adversary.

As the news broke about the emails Monday night, and Trump Jr. released them during the day yesterday, plenty of Democrats jumped into the camera frame to denounce the younger Trump. Legal analysts explained just how damaging the revelations were but that it was not clear any law had been broken. Republican talking heads earned their pay, weakly trying to change the focus to whatever that information about Clinton was, an approach that is not likely to succeed in no small part because she did not become president. Trump Jr. went on air to say there was nothing to the meeting.

The younger Trump might be believed that there was nothing to the meeting if he and the entire campaign had not denied ever meeting with Russian officials in the first place. Then, when confronted with evidence that he did meet with a Russian official, he said the meeting was about orphans. Every time the Trump team has had a chance to tell the truth, they have told a lie. Perhaps Pope Benedict XVI was simply prescient when he warned against the "dictatorship of relativism."

Of course, the younger Trump couldn't have known there would be nothing to the meeting beforehand, as his emails indicated. But there never should have been a meeting in the first place. Longtime GOP campaign adviser Stuart Stevens recalled an incident in 2000 when the campaign of Vice President Al Gore received leaked information from the campaign of Gov. George W. Bush. Gore's team called the FBI and handed the information over to them, and there was no evidence the information had come from a foreign adversary!

The biggest question that no one could answer yesterday is: Why? Why would the son of a candidate do something so reckless? Why, when he forwarded the emails to the campaign manager and his brother-in-law, the wunderkind Jared Kushner, why did they not put an immediate stop to the effort to arrange the meeting and, instead, attend the meeting themselves?

I think I know the answer.

Before he was indicted for fraud, served two years of a three-year prison sentence, and paid a fine of $100 million, Ivan Boesky was a Wall Street genius, the man who made millions in the arbitrage business, mounting corporate takeovers that yielded vast profits.

So was Michael Milken, the man who was credited with making the high-yield bond market popular again for the first time since the Depression. He, too, was convicted of various crimes, sentenced to 10 years* in prison (later reduced to two years) and he paid $200 million in fines* and several hundred million dollars more in civil settlements.

The thing that made them geniuses, that made others want to be with them or to be like them was their daring, their willingness to take the risks that others shunned, all in the hopes of making that extra million or billion that the others were too timid, too weak, to reach for. The 2013 movie "The Wolf of Wall Street" was based on a memoir, not a novel.

That was the world that nurtured Donald Trump Sr. and Jr. Although the Trumps made their millions in real estate and branding, they found themselves at the same benefits, dining at the same restaurants, pictured in the same style sections of the newspapers, as the Wall Street barons. It was no longer a world in which cash was king. That pedestrian-level greed was a thing of the past. It was a world in which debt and manipulation were king, magically leading to billions of dollars in profits and the more corners you cut, the more you were hailed as a genius, until the Securities and Exchange Commission caught up with you.

None of this should surprise a Christian. We were warned that the love of money is the root of all evil.

In the late 1990s and first decade of the 21st century, however, there was a change in the world where dwelt the Trumps and the titans of Wall Street. Men, and they were always men, began showing up with so much money, they were impossible to ignore. They had funny-sounding names, and their alphabet was different from ours, but did they ever have cash, and it was cash, not some financial instrument. They had become billionaires almost overnight because when communism collapsed, no one knew the price of a tractor or an apartment, but the country was rich with resources that a few with strong political and mob ties gobbled up on the cheap, and are still exploiting.

These new Russian billionaires bought real estate big time. Trump unloaded a mansion in Palm Beach, Florida, he had bought for $41 million and sold three years later for $95 million. The buyer? Dmitry Rybolovlev, a Russian fertilizer magnate heading into divorce proceedings and desperate to place his assets out of his native country. His family had previously bought the island once owned by Aristotle Onassis, where Onassis had married Jackie Kennedy; an $88 million apartment overlooking Central Park; and a $20 million house in Hawaii. (Maybe if Trump read his briefing books, he would know that to become a billionaire in Russia today, you have to stay on good terms with Vladimir Putin, that is, they all have ties to the Russian mob/government.)

So, Donald Jr. can be forgiven for thinking warm thoughts when told that a Russian bigwig wanted to meet with him and, what is more, that the person had dirt on Clinton. Anyone with the ability to assess values properly would have thought: "Wait, Clinton is our campaign's opponent, but Russia is our country's adversary. Surely, it would be wrong to even contemplate colluding with them?"

Trump Jr. did not assess the values at stake properly. What in his background would have prepared him to do so? He and his family lived among the kings of the universe, like the other rich people they knew in New York, like those new Russian billionaires who had more money than anyone had ever seen. And, now, these people could help his dad show all those snobs who looked down on the family as vulgar nouveau riche, show all the press and the entire political class that he was smarter than they were and he could eat them for lunch.

I trained my dogs not to pee on the rug, to walk at my side and not pull on the lead, to not jump on people. Turns out, you can train a human being to ignore basic questions of decency and propriety and legality. You can even train them to get excited at the prospect of breaking what rules they know.

But when they get caught, there is no rug cleaner to deal with the smell. It is indelible. That is the lesson Trump père and Trump fils are about to learn.

*This story has been updated to clarify Michael Milken's prison sentence and the amount he paid in fines and settlements.