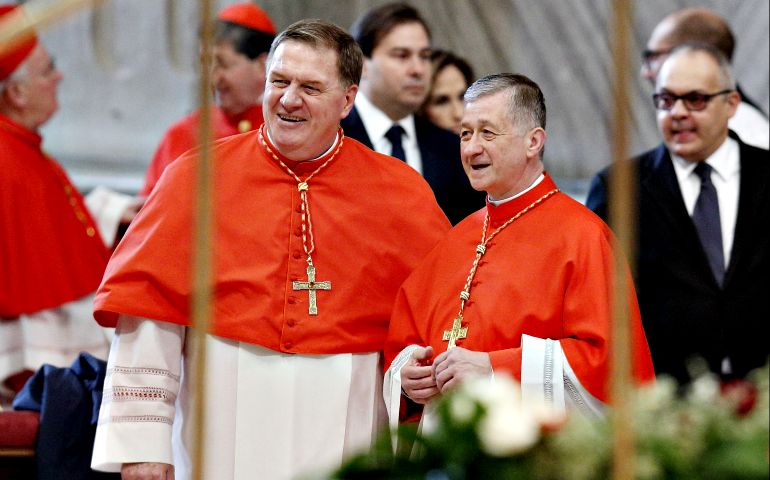 New Cardinals Joseph Tobin of Indianapolis and Blase Cupich of Chicago arrive for a consistory led by Pope Francis in St. Peter's Basilica at the Vatican Nov. 19. (CNS/Paul Haring)

The estuary where the rivers of church and state run into each other began to change currents in 2016 in ways that were always interesting, sometimes fearful, sometimes hopeful. At both the grassroots level and among leadership, change is in the works.

The appointment of three new American cardinals changed the complexion of the leadership of the Catholic church in the U.S. As noted yesterday, there will be ramifications for the internal life of the church in these appointments to be sure, but there will also be a change in the public face of the Catholic faith in the public square. Cardinal Kevin Farrell has taken a post in Rome, but look to Cardinal Blase Cupich in Chicago and Cardinal Joseph Tobin, soon to be in Newark, N.J., to increasingly drive the message from the Catholic hierarchy in the public square.

We saw some evidence of this already. In December, it fell to Cupich to announce that the U.S. bishops had formed a working group to monitor the immigration issue and develop strategies for political advocacy on behalf of immigrants. There had been no official notice from the U.S. Conference of Catholic Bishops. The year before, both Tobin and Farrell confronted political opposition when resettling refugees through Catholic Charities in their dioceses. All three have been attacked by archconservative groups like LifeSiteNews and the Lepanto Institute for being too progressive.

Tobin is heading to the largest media market in the country. While he is not the kind of man to throw his weight around, he bench-presses 225 pounds. And, as he showed in an interview with The New York Times, he is not afraid to show his wisecracking side when he looked forward to his move to New Jersey and then pointed to the guys he works out with at the gym in Indianapolis, saying, "None of those Sopranos are going to mess with me. This is my crew." Friends speak of his quick wit and razor-sharp intellect. Pope Francis knows how to pick them.

Cupich began focusing on two major projects, one more ad intra and one more ad extra, but both of which have the potential to alter the church's public face.

First, he has embarked on a restructuring of parishes, always a fraught task, but instead of bemoaning the lack of resources or changing demographics, Cupich talks about seeking evangelical vitality in Chicago, and promoting it. He doesn't start with demographics, but with a sense of mission. That is no guarantee that the restructuring will go smoothly, but it shows a deeper understanding of the role of a bishop from merely managing the construction, or deconstruction, of brick and mortar.

Second, he has pledged the resources of the Catholic community to help confront the scourge of violence in Chicago. His convoking power alone is unique: There is no one else in Illinois who could get the Democratic mayor and the Republican governor into the same picture frame, but Cupich did it in Rome in November when both men came to the ceremonies surrounding his becoming a cardinal.

In addition, the resources of the Catholic school system, including its universities and colleges, are focusing on what they can do, as are parishes and Catholic Charities. The problem of gun violence in Chicago is huge, and won't be solved without national initiatives to curb the ready availability of guns (and such initiatives are unlikely), but making a dent will help.

The influence flowing into the estuary from the political realm has also changed, even if some prelates missed it. Archbishop Charles Chaput of Philadelphia wrote that the Obama administration "has been the most stubbornly unfriendly to religious believers, institutions, concerns and liberty in generations." It would be more accurate to say that the Obama team was unresponsive to Chaput's concerns.

Certainly, Obama was plenty friendly to those Catholic believers who qualified for Deferred Action for Parents of Americans and Lawful Permanent Residents (DAPA) and Deferred Action for Childhood Arrivals (DACA). Chaput neglects to note that it was President George W. Bush's administration that took the country to war in Iraq, which did not turn out well for the Catholics in that country.

And on the principle chosen battlefield of religious liberty, the Supreme Court's order to both church and state regarding the Health and Human Services contraception mandate was indicative of how estranged the leadership of both the bishops' conference and the Obama administration had become from one another: The court basically said, "Grow up and fix this."

But while Chaput and the culture warriors at the bishops' conference were sweating the contraception mandate, the party they prefer was the object of a hostile takeover. Donald Trump claims to be committed to the pro-life cause, but he has not demonstrated much awareness of the issue. I will bet good money he does not know what the Supreme Court held in Planned Parenthood v. Casey.

GOP front groups like the Susan B. Anthony List championed the billionaire's campaign, but their endorsement told us more about them than about him. One of the leading achievements of the pro-life movement in recent years has been making it more explicitly concerned about women, without which it was doomed to be dismissed as a bunch of white guys telling women what they can do. Trump's misogyny mocks that achievement.

Never in living memory has a campaign been organized around a darker vision of human society. I would not be inclined to believe that Trump spent his summer reading Hobbes, but who knows? The dog whistle of racism often gave way to the German shepherd whistle: The racist memes were not subtle. Trump's nativist rhetoric especially served him well during the election, not only stoking the base, but playing on the resentments of those left behind in the global economy. The base will want to see that wall being built.

At the grassroots level, there are already some stirrings of a renewed Catholic activism, especially on the immigration issue. Latino Catholics throughout the country participated in the annual celebrations of Our Lady of Guadalupe, but this year there was a special focus on protecting immigrants. Pastors know how disruptive any crackdown on undocumented will be on families in their parishes. Groups like PICO, Faith in Public Life and the Association of Catholic Colleges and Universities have already begun to set down markers.

Among the hierarchy, defending immigrants enjoys widespread support, which makes it all the more inexplicable that the leadership of the bishops' conference has been dragging its feet on the issue. The pope was plenty blunt about the Christian values at stake, saying in February, "A person who thinks only about building walls, wherever they may be, and not building bridges is not Christian."

On other issues, such as care for creation, 2016 did not see a wave of activism in Catholic circles. The bishops barely mentioned the pope's encyclical on the environment, "Laudato Si', on Care for Our Common Home," at their November meeting.

The Catholic academy had a rush of conferences and symposia on the encyclical, but where has been the follow up from the institutions where they work? Are there Catholic dioceses or colleges that are not just talking about the environment but taking steps to convert to sustainable energy sources?

Two evangelical leaders warrant a mention for the role they played in defining and defending the public face of the Christian faith this year. Russell Moore, president of the Ethics & Religious Liberty Commission of the Southern Baptist Convention, refused to jump on the Trump bandwagon, arguing persuasively that basic Christian virtues like veracity and marital fidelity were at stake.

And, week in and week out, Michael Gerson at The Washington Post was the inspired voice of political and Christian conservatism, unsuccessfully seeking to persuade his fellow conservatives that Trump stood for everything they were against and could offer only lip service to all that they value.

A divided church and a divided polity, both in transition, the former moving to a more hopeful and inclusive vision, the latter embracing the darkness. This was what 2016 evidenced, in ways few had appreciated before.

It is in the estuary where religion and politics meet that American culture has traditionally found the balm that heals our wounds. This year, that estuary was shifting in important ways, but it has not yet given direction to either the religious or political challenges the country faces. It will fall to the new faces that emerged in 2016 to point both church and state toward a happier future in 2017.

Justice | Year in review: Change in the works for US church leadership