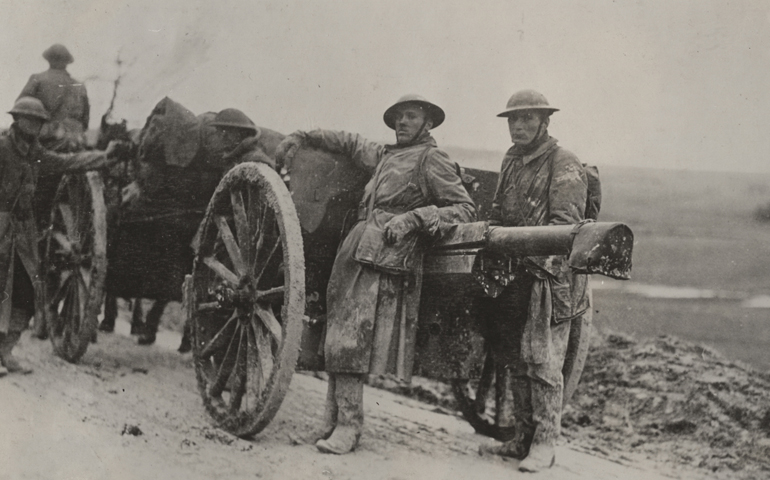 U.S. soldiers are seen in an undated photo in World War I. (CNS/U.S. Signal Corps, courtesy National World War I Museum and Memorial)

YOUNG RADICALS: IN THE WAR FOR AMERICAN IDEALS
By Jeremy McCarter
Published by Random House, 400 pages, $30

Yesterday, I began my review of Jeremy McCarter’s new book Young Radicals and today I should like to conclude.

The lives of the young radicals are nothing if not fascinating. I kept wondering if there are young people today whose lives are so consumed with that rare combination of intellectual vigor and progressive optimism that the five protagonists display. Do people anymore start a theater troupe one summer, writing scripts and performing the plays, only to have one of their number show up one night with a friend, and the friend is a young Eugene O'Neill? But, that is what happened to Jack Reed one summer in Provincetown.

Reed and Walter Lippmann, friends at college, walk very different paths through the decade. Reed is flamboyant, the prince and the prankster of the Greenwich Village scene. When Reed takes up with a married woman, Freddy Lee (whose husband is a mutual friend of both Reed and Lippmann), Lippmann finds himself the recipient of a barrage of letters from Reed’s last paramour, Mabel Dodge, pleading for his aid, as Reed had asked him to comfort Mabel when the news of his new love struck her. It is too much. McCarter writes: "Lippmann has plenty of affection for both of his friends, but the frivolity of Greenwich Village, and the people who play there, seem more and more ridiculous to him, more remote from his life. He has responsibilities; he has work to do; there is a war on. Like Prince Hal, he is ready to turn his back on Falstaff and all his pranks, and turn his gaze to the palace." This fine bit of prose is emblematic of the entire book which makes it such an easy read.

Randolph Bourne joins Lippmann at The New Republic as it starts in 1914 and the two become friends. He marvels at Lippmann's productivity and Lippmann is one of the first guests at Bourne’s summer home in Caldwell, New Jersey. But Bourne does not share his friends' ideas, especially about the nature of America society as dueling essays in 1916 demonstrate. As McCarter notes, "Watching Bourne and Lippmann address the same subject is a chance to trace the differences in their radicalism. In Lippmann's 'ideal of Americanism,' two concepts are pitted against each other. He wants America to be 'a union of people rather than a congeries of groups, provinces and racial stocks.' Bourne shares Lippmann's desire for a union of people, but the point of the trans-national ideal [that Bourne champions] is that people form that union while still belonging to different groups and feeling affinity with separate racial stocks." Bourne would complete his thesis by introducing Josiah Royce's concept of "Beloved Community."

Alice Paul's life does not permit her the luxury of contemplating communities, beloved or otherwise. The suffragette is constantly looking for ways to force President Wilson to endorse a constitutional amendment extending the franchise to women nationwide. She disrupts a parade in Chicago. She and her colleagues protest outside the White House. When they are arrested and sent to jail, they start a hunger strike. Paul is unrelenting in her determination and, unlike the men in this story, she gets a large chunk of what she wants before it ends: Universal suffrage is enacted. Full equality for women, Paul's ultimate goal, like the socialistic or progressive goals of the other protagonists in this story, is something still beyond our societal grasp.

Max Eastman doesn't join The New Republic, he mocks it and "those mighty young bronze beasts who edit the New Republic." But like his less radical friends, Eastman must wrestle with how the war has forced a reexamination of basic assumptions and, curiously, like Lippmann, he does not surrender his ideals. "I do not believe a devastating war in Europe will stop the labor struggle," Eastman writes in The Masses. "I believe it will hasten the day of its triumph. It will shake people together like dice in a box, and how they will fall out nobody knows. But they will fall out shaken; that everybody knows." I read those sentences and my mind went immediately to our own time in which President Donald Trump, not a "devastating war in Europe," will leave us all shaken although no one knows exactly how yet.

The most fascinating part of the book comes when the U.S. enters the World War in 1917. "The young radicals are about to face a whole new set of consequences from their decisions to pursue their ideals in the tumult of public life," writes McCarter. "They had made those choices against a backdrop of peace and relative stability. A world of abundant promise now seems a world of unknowable danger. The question is no longer Will you work to see your ideals realized? The new reality asks them How far will you go? How much risk can you handle? How much pain can you endure?"

Lippmann goes to work for President Wilson while Reed goes to St. Petersburg and gets swept up in the Russian Revolution. The old college chums find themselves both engaged in propaganda, McCarter notes. Eastman is charged under the Espionage laws, stands his ground at trial and is acquitted. Later in life, he will go on to write for Reader's Digest, that "squarest and least radical magazine in America." Bourne publicly breaks with his mentor, John Dewey, as well as the editorial stance of The New Republic.  He writes some of the most powerful and trenchant critiques of war I have ever read. An example: After noting the claim that they are leaders made by the editors of The New Republic, and noting that those pushing for war all along had been the jingoists, the plutocrats and the conservatives, he writes: "Only in a world where irony is dead could an intellectual class enter war at the head of such illiberal cohorts in the avowed cause of world-liberalism."

I shall let the reader discover the rest of this fascinating tale, written both powerfully and carefully on every page, researched with exhaustion and written with panache. My only criticism would be directed not at the story itself but at McCarter's epilogue. The steady hand that wrote the book is lost as he contemplates the Women's March the day after the inauguration of President Trump. "American conditions feel so precarious as I'm writing this in early February 2017 that any prediction might seem foolish by the time you read it. It might seem foolish by the time I finish typing it. But the scale and the zeal of the Women's March suggests that we've entered a new phase in the history of American idealism." He should have listened to his caveats: It is so far quite foolish to think our country has entered a new phase of idealism. Where is the evidence?

All is forgiven, however, even in the epilogue, by McCarter's ability to craft beautiful sentences that contain poignant ideas. He concludes the book: "Whatever happens, we ought to be braced by the example of the young radicals; how they discovered their ideals, made a decision to fight for them, and went on fighting even when the battle turned against them. Their defeats were painful, but not final. Battles for ideals never are. Ruins stop being ruins when you build with them."

Now that this review is published, I shall call McCarter and pose him a particular question: There seems to be a complete absence of any religious tone or content in these five young radicals. Did that not hinder them in a culture where religious language and imagery is still so redolent? And, in our own day, is it still necessary to find at least some of the resources for cultural renewal and progressivism in religious idioms? McCarter does not address this question in his book, and I am glad he didn't: He sticks to the narrative and lets the protagonists tell their own story, which is why it is such an engaging read. (Letting the protagonists tell their own story without the author getting in the way is also a lot harder to do than it looks!) But, if he truly discerns in the Women's March a new progressivism, did the march organizers' decision to bar pro-life feminists from participating evidence a healthy or unhealthy strain in contemporary progressivism?

If this still young thinker and writer is wondering what to write next, I would propose he look at the nexus of religion and progressivism in the lives of other emblematic Americans. I would read that book too and I am confident I would delight in it as I did in this one. But that is all in the future. For now: Read this book! You won’t be disappointed.