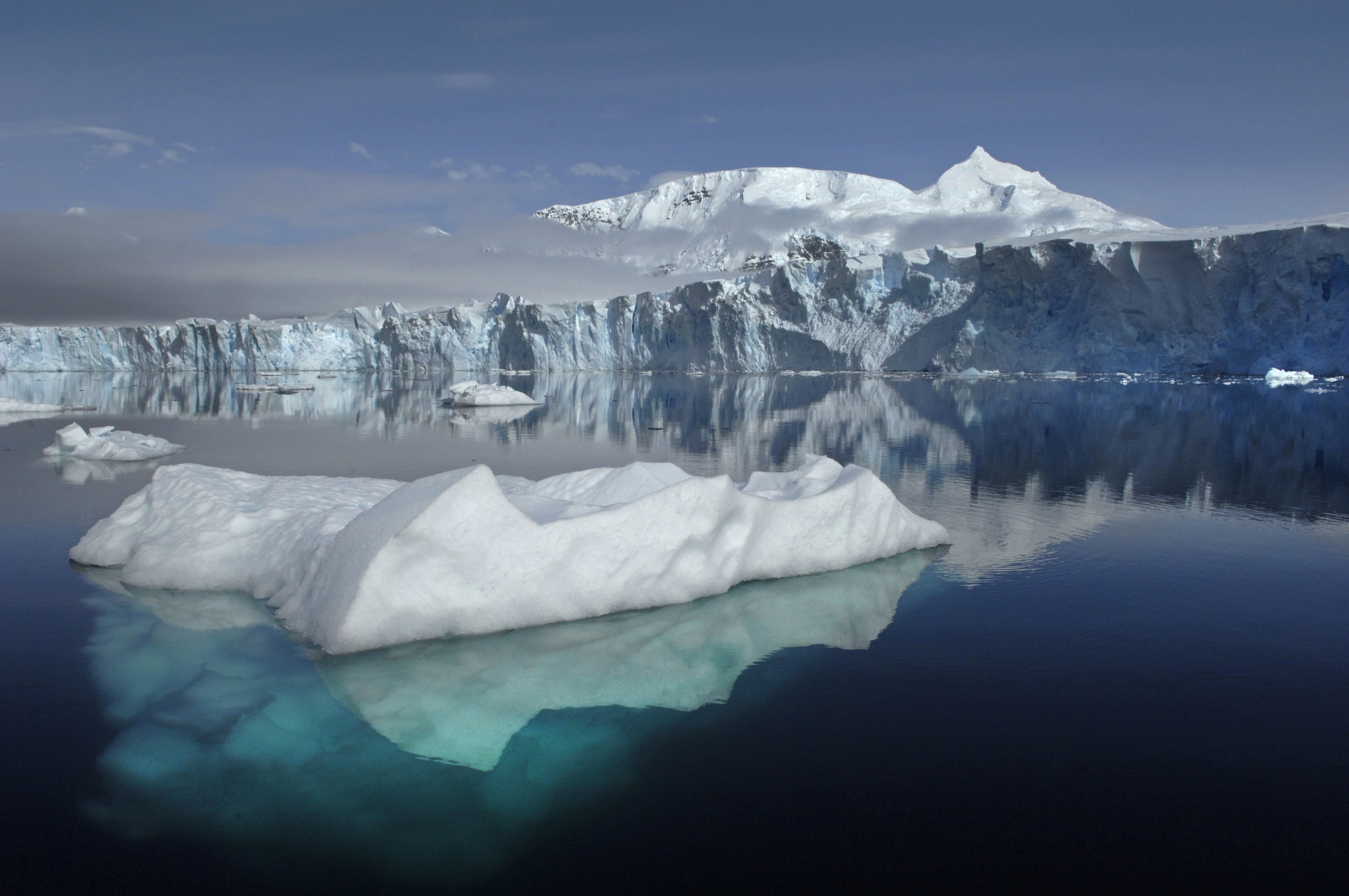 The Sheldon Glacier with Mount Barre in the background is seen from Ryder Bay near Rothera Research Station, Adelaide Island, Antarctica, in this undated handout photo. Climate change is causing the world's glaciers to melt at an unprecedented rate. Cath olic leaders gathered at The Catholic University of America in Washington Nov. 8-10 discussed Pope Benedict XVI's teachings on the environment and climate change. (CNS photo/NASA handout via Reuters)

[Editor's Note: This post has been updated to include quotes from Tobias Winright​]

The tides following storms such as Hurricane Sandy often bring with them debris from the destruction caused; lately, among tires and treasured items, the coastal waters have pulled two words back into the public sphere: climate change.

That climate conversation washed upon Washington Nov. 8, and onto the campus of the Catholic University of America, bringing together academics, bishops, church leaders and climate activists to explore and engage papal teaching on creation and the environment.

The symposium, titled “A Catholic Consultation on Environmental Justice and Climate Change: Assessing Pope Benedict XVI’s Ecological Vision for the Catholic Church in the United States,” came about through a partnership of CUA’s Institute for Policy Research and Catholic Studies, the U.S. bishops’ conference, and the Catholic Coalition on Climate Change.

Over the course of three days, five panel sessions, and several bishop addresses, the conference highlighted the moral implications of global climate change and environmental justice facing — and affecting — communities across the nation and around the globe.

“We have seen the destructive impact of climate change and environmental degradation both around the world and at home,” said Stockton, Calif., Bishop Stephen E. Blaire, chairman of the USCCB Committee on Domestic Justice and Human Development, in a pre-conference statement.

“These impacts often multiply the hardship experienced by the most vulnerable people in the world. … This symposium is an important step in guiding our Catholic response to these challenges,” Blaire said.

Such guidance, in recent years, has come directly from the top, through the teachings of Pope Benedict XVI on climate change and the environment. His writings served as a framework for the symposium’s discussions, which engaged four areas:

“Pope Benedict has consistently drawn attention to [climate and environmental issues] and urges all to take moral responsibility to reduce our environmental impact and our carbon footprint,” Blaire said.

With bishops, theologians and lay people sharing not only discussion, but meals and worship, the conference provided an opportunity for serious conversations and connections, said Tobias Winright, an associate professor of theological ethics at Saint Louis University.

"Such engagement and interaction allowed not only for identifying consensus but also for cordial and honest expression of disagreement," he said.

Winright served on the committee that reviewed and selected a dozen scholars, from an initial pool of more than 50 submitters, to present papers in each of the four areas outlined by Benedict. He and Jame Schaefer of Marquette University are preparing a volume of the final papers for publication in the near future.

A dozen scholars, narrowed from an initial pool of more than 50 submissions, presented papers in each area to provide the framework for discussion.

The intersection of ecology and ethics is a rich area for interdisciplinary work, said Christiana Z. Peppard, an assistant professor of theology, science and ethics at Fordham University in New York and a panelist in the solidarity/justice/peace/common good session at the conference.

“This conversation [on climate change] is vital at present because Americans have a very hard time hearing that our superdeveloped lifestyles might be in some way causing or complicating the lives of distant neighbors across the globe,” Peppard told NCR in an email, calling the conference’s timing “uncanny.”

While the idea for the conference emerged three years ago, its timing aligned with a storm that left one of the nation’s most populated regions without power and with much loss — more than 100 lives were lost due to Sandy, with current estimates of $50-plus billion in property damage and economic losses.

Dan Misleh, executive director of the Catholic Coalition on Climate Change, said that once-in-a-century storms like Sandy have seemingly become the norm in recent years as ocean waters have warmed, and such super storms reflect scientists' general findings on climate change, that rising ocean temperatures multiply and feed a storm’s intensity.

Having the conference in the wake of Sandy, while not anticipated, brought a real element of climate change to the talks, Misleh said.

So, too, did the presence of a bishop whose diocese has become refuge to people whose homes have become threatened by rising ocean tides.

Bishop Bernard Unabali of Bougainville, Papua New Guinea, delivered the symposium’s keynote address. His diocese has become a refuge to people of the Carteret Islands, an atoll in the South Pacific Ocean that sits just five feet above sea level.

In his address, Unabali described the connection between the environment and sacramental life he stresses, saying he asks those he baptizes or confirms to plant 10 trees as a way to give new life but also curb climate change, according to Catholic News Service.

"We must entrench something in our lives to continue this environmental concern, respect and care," Unabali said.

The plight of the Carteret Islanders was the subject of a 2011 documentary titled “Sun Come Up.” The film, nominated for an Academy Award, was part of the climate coalition’s nationwide celebration of the feast of St. Francis Oct. 4, with more than 20,000 people attending the 320 screenings in 42 states, each followed by a discourse of the implications of climate change.

Winright said that Unabali's address, combined with a homily delivered by Bishop Donald J. Kettler of Fairbanks, Alaska, whose diocese includes a village also facing relocation due to climate change,  demonstrated the global scope of the problems, that "two bishops on opposite sides of the planet are pastors of native populations who are least responsible for human-caused climate change but most affected by it."

"As a Catholic community, we have to begin to shape our liturgies, our prayer life, our education systems, our theology to come up with new and different and better ways to express the need for solidarity with creation and people who are being impacted by our choices," Misleh said.

That the church sees issues of climate and the environment through “the language of fundamental rights, including the ‘right to life,’” Peppard told NCR, “is a call to awareness in our American context,” where often right-to-life talk singles out abortion.

“Abortion is an important issue, but it is not the entirety of Catholic teaching,” she said.  “Innocent people are impacted by climate change, disproportionately. This is a justice issue, and it is a life issue.”