Animal trio shows people how to love their enemies 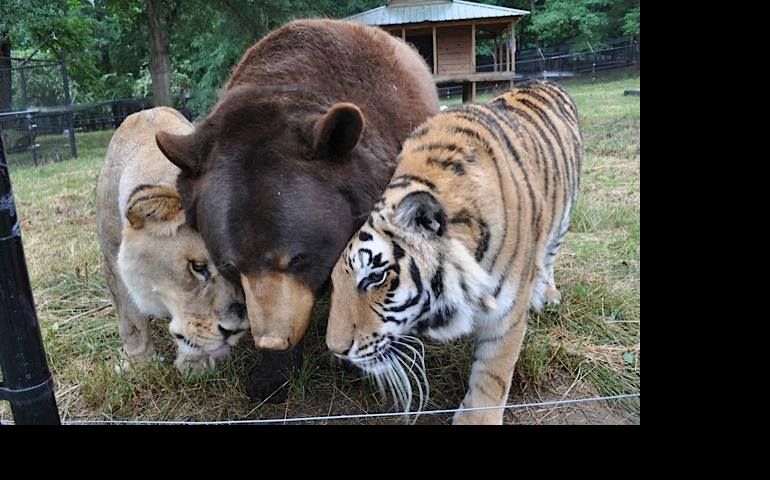 News that federal regulations may soon break up a friendship among a lion, tiger and bear has caused some people to exclaim more than “Oh my!”

Located in Locust Grove, Ga., Noah’s Ark Animal Sanctuary is home to possibly the world’s only cohabiting lion, tiger and bear. But new regulations from the U.S. Department of Agriculture threaten to break up the trio after 12 years of communal living.

Guidelines for lion and tiger encloses announced in August from the department’s Animal and Plant Health Inspection Service would require the nonprofit sanctuary to double its eight-foot-high fencing – a $500,000 renovation for the 250-acre refuge. If the fences don’t rise by October, the sanctuary risks closure, and a possible separation of the trio affectionately known as “BLT.”

The 1,000-pound North American black bear, 350-pound lion and 350-pound Bengal tiger were raised together in an abusive home. When their owner was arrested for drug dealing, the cubs were sent to Noah’s Ark.

Allison Hedgecoth, the animal husbandry manager at Noah's Ark, told an Atlanta news station in March the three animals had formed an early bond during their time in the drug house.

"That hard time really made them come together as family. We never separated them. As you can see, they still live together, play together and they love each other,” she said.

In the wild, the three creatures would never live together and could easily kill one another. However, the enormous bear and his big cat brothers have learned how to play carefully together. They like to wrestle, chase balls around their enclosure and even snuggle.

"It is wonderful and magical to see a giant American Black Bear put his arm around a Bengal tiger and then to see the tiger nuzzle up to the bear like a domestic cat. When [the lion] wakes up the three of them mess around for most of the day before they settle down to some food," Diane Smith, assistant director of Noah's Ark, told the U.K-based Telegraph in 2009.

The sanctuary has launched a “Keep the Boat Afloat” fundraiser on various social media outlets, including Crowdrise.com. So far, people have donated close to $200,000 of the nearly half a million dollars needed to raise the fences and keep “BLT” together.

The classic Artscroll commentary on Bereishis (Genesis), states that in the Biblical version of Noah’s ark, “the people who approached the ark knew that they were doing so because of the Flood-water…but the beasts had no idea why they were coming to Noah; it was the Spirit which was drawing them; they came because ‘God had so commanded Noah.’” In other words, animals are inextricably linked with the insight and honesty of the Holy Spirit.

Also in the Artscroll, Rabbi Meir Zlotowitz explains that God gave Noah the task of caring for all of the earth’s creatures in order to learn compassion. If Noah, perfectly righteous, learned compassion from the animals, how much more can we learn from them?

The empathy that the “BLT” family displays is not exceptional. Animals have been known to abandon their instincts when they sense that another animal is in need. Documented examples of anomalous animal pairings include an orphaned hippo and a century-old turtle, a stray kitten and a wild crow, an abandoned dog and an orangutan and a cast-off fawn and a Great Dane.

In these instances, is God trying to show us that compassion is more important than instinct? That when we sense suffering, we should abandon pre-conceived notions?

Does the command to love our neighbor outweigh that neighbor’s race, class, gender, sexual orientation, religion, ability … or even humanness? Are animals our neighbors?

And if a lion, a tiger and a bear can live in peace, is it a stretch to ask if the human race can as well?

EarthBeat | Animal trio shows people how to love their enemies