Religious leaders in the United Kingdom are using this Ash Wednesday as a call to all Christians to repent for the “shrug-culture” existing in many parts of the world toward climate change.

Operation Noah, a Christian climate change lobby, released today its Ash Wednesday Declaration – a seven-point call to action based around biblical themes about creation and humanity’s responsibility to care for it. 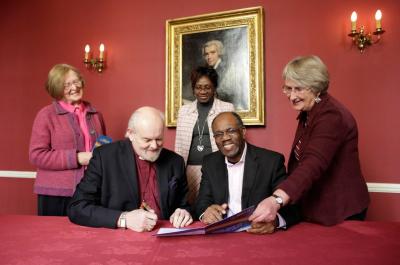 "Traditionally, Christians commit themselves to repentance and renewed faith in Jesus Christ on Ash Wednesday," said David Atkinson, Assistant Bishop in the Diocese of Southwark, in a press release. “We must live out that faith in relation to our damaging consumer economy, over-dependence on fossil fuels and the devastation we, as a species, are inflicting on God's world.

"We believe that responsible care for God's creation is foundational to the Gospel and central to the church's mission."

Numerous churches across England, including St. Mary-Le-Bow in London, held public prayer services to launch the Declaration, subtitled "Climate Change and the Purposes of God: a call to the Church."

Operation Noah was formed in 2001 by Christian Ecology Link. Its website state its goal is a complete decarbonization of the British economy by 2030, and to reach that end, the organization works to educate and advocated church leaders, governmental leaders and children through various campaigns.

The Declaration states that global warming and its effects raise questions central to the Christian faith, and highlights seven areas, each stemming from a specific biblical verse (excerpts below are not bible verses, but bits from each theme in the Declaration):

Because of the connections between each of these tenants and climate change, Operation Noah views climate change as a confessional issue for our time, one that requires spiritual reflection and action.

"We believe that this is a time of urgency for the church," said Atkinson. "The threat of runaway climate change is the most significant moral question facing us today."