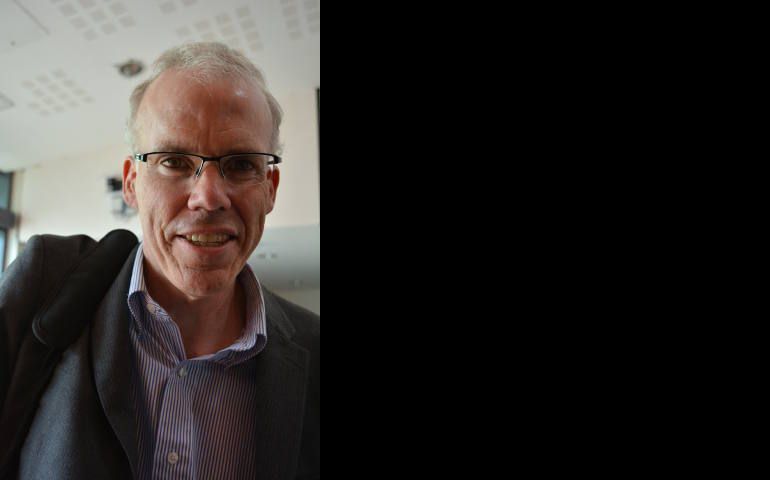 Environmental activist and founder of 350.org Bill McKibben said the publication of Pope Francis' environmental encyclical represents "a moment to revivify the many millions of Americans who stopped thinking that faith had something important to say to the world." (Sarah Mac Donald)

Flooding at a New York airport nearly derailed his trip, he explained June 23 at the “Meeting the Challenge of Climate Justice: From Evidence to Action” international climate conference co-hosted by Trócaire (the Irish bishops’ development agency), Maynooth University and St. Patrick’s College Maynooth.

According to the U.S. National Oceanic and Atmospheric Administration, May 2015 was the wettest month since records began in 1894, with 4.36 inches of rain (or 1.45 inches above average precipitation levels) bucketing down.

McKibben, founder of grassroots climate group 350.org, noted that climate science has indicated extreme precipitation events are more likely to occur as the temperature of the earth rises, causing the atmosphere to hold more water vapor. At the same time, other places will battle recurrent drought -- such as California, the most populous U.S. state, currently in the fourth year of a historic drought.

“We’ve have the worst drought ever recorded and along the great mountains of the North American West, the snow pack this year has all but disappeared,” McKibben said, leading to far-reaching consequences for the farming community.

Elsewhere, it is flooding and rising sea levels the people of Bangladesh -- one of the most densely populated countries in the world -- fear most. Its people are crammed into its low-lying flat landscape, which is fractured by a delta of rivers that empty into the Bay of Bengal.

Trócaire estimates that a 1 meter rise in sea levels, projected for the coming decades due to climate change, would displace at least 30 million people in Bangladesh.

Auxiliary Bishop Theotonius Gomes of the Bangladeshi capital, Dhaka, spoke on the second day of the Maynooth climate conference about the moral imperative to act on climate change.

“Climate change is affecting real people in huge numbers,” Gomes said. Before his address, he told NCR the climate is a moral issue because “the poor are doubly affected” by it.

Christians make up less than 1 percent of Bangladesh’s estimated 156 million people, 90 percent of the population are Muslim, with the remainder primarily Hindus and Buddhists. As a country, its people are facing the threat of rising sea levels, erratic rains and increasingly extreme weather.

“The kind of thing that we are already seeing in the places most badly affected [like Bangladesh] will be every place and that experience now reserved for the most vulnerable will be the experience of all the people on earth,” McKibben said, recalling how the 2010 floods in Pakistan forced 20 million people out of their homes.

According to McKibben, “None of this comes as a surprise to scientists. The only surprise is the speed with which these changes have started to appear.” He urged his audience, which included climate scientists, eco-religious congregations and environmental activists, to reflect on the scale of what humankind is doing to the planet.

Referring to the melting of the glaciers, he warned, “We’re taking the biggest physical features on earth -- the kinds of things we can see from space -- and we’re breaking them one after another.”

This planetary dislocation, he said, is the result of having raised the temperature nearly 1 degree Celsius since 1880. According to the United Nations' Intergovernmental Panel on Climate Change that absent additional mitigation efforts, global warming will climb to 4 degrees Celsius by 2100.

“If that happens then we cannot have civilization or life as we once were used to. We simply won’t be able to grow food on the scale that is required, our coastal cities will be inundated,” McKibben said.

The son of small farmers, Gomes said he keeps informed about the difficulties farmers encounter through his siblings who continue to work the land.

“Farmers have an inner wisdom and crops have their capacity to grow, how fast to grow, when to flower and when to mature into grain. But the increasing temperature is affecting the agricultural patterns of the crops and the simple wisdom of the farmers, leaving them unable to plan properly for the rains. In vain they sow,” the auxiliary bishop said.

The 76-year-old prelate is concerned about the commercialization of the food sector and the consequent loss of a more integrated approach to food. “Fast food is more about quantity and feeling full, but natural food is cleaner and gives strength. We are losing our respect for the beauty of food through fast food and GM crops,” he said.

He told NCR he is unhappy with the “push to promote GM crops” in his own country and elsewhere. His emphasis on “good food” relates to his concerns over the increasing influence of agribusiness and its desire to “take the food sector in their hands” rather than “leave it to the farmers and the natural sector.”

“I have always felt all created goods are given to us as food and nourishment. God gave mankind such things to eat so we respect every food as a gift and as a life giving element,” Gomes said.

Discussing Pope Francis’ environmental encyclical, Laudato Si’, the auxiliary bishop said it “brings us to a global understanding of the problem. It goes into the technological issues but also issues like having good water, which is fundamental for people and having good food.”

For McKibben, the urgency of the climate issue is calling people not to individual action, but to common action – with the church having a big role to play. He described Laudato Si’ as “an amazing piece of work, incredibly rich and deep. It is neither liberal nor conservative, it is radical in interesting ways.”

Though a Methodist himself, he said with this papal document, “Everybody has got their marching orders. It’s very clear that the pope has decided this is the most urgent problem facing the planet -- so we will see whether the church is capable of a response.”

Praising the depth of the encyclical’s theology, McKibben, who helped mobilize last September 400,000 people to march in New York to demand climate action, suggested that the encyclical’s publication is “a moment to revivify the many millions of Americans who stopped thinking that faith had something important to say to the world and to remind them that in fact it does have something important to say to the world.”

The basic problem he said is the power of vested interests, such as agribusiness and the fossil fuel industry, to keep us from doing what needs doing. McKibben identified companies like Exxon and Chevron as the powers of our day and age, and “the guys that we simply have to stand up to.”

He urged Catholic institutions to get behind the divestment movement and follow the lead of universities such as Georgetown University and the University of Oxford, both of which announced partial divestments from fossil fuels in recent months.

“There is no way to read the pope’s letter and then be comfortable sticking your money in oil, coal and gas,” McKibben said.

At a time when many may wonder if the Catholic church has lost its moral authority as a consequence of the clerical abuse scandals, Francis appears to have picked up the baton, in McKibben’s view.

“[He has] demonstrated to us how spiritual leaders are supposed to act; not with half measures, not by saying on the one hand and on the other hand but just by saying ‘Here’s where we are and here’s what we’re asking.’

“The rest of us in this movement need to be doing the same kind of thing,” he said.