Biophilia and the barcode of life

Last month, I had the privilege of attending a Wege lecture at Aquinas College in Grand Rapids, Mich., where Daniel Janzen, the world-renowned biologist, was the presenter. 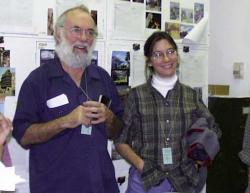 Professor Janzen, of the University of Pennsylvania and the Guanacaste Conservation Area in Costa Rica, and his wife, biologist Winnie Hallwachs, have witnessed how the incredibly biologically diverse area of Costa Rica was becoming gobbled up to development. Rather than lament and throw up their hands, Daniel and Winnie acted.

They partnered with the Costa Rican government, other governments and friendly foundations to launch the Guanacaste National Park Project. The restoration of this northwestern part of Costa Rica, known as the Area de Conservación Guanacaste, has been one of the great miracles of modern-day biology. There are now 190,000 hectares of restored land in this region. (The entire country is about 151,000 square kilometers, about the same size as the state of Michigan.)

What is extraordinary is that this small country in Central America contains an estimated 4 percent of the world's known species. In recent years, Professor Janzen has enlisted local denizens to help with the enormous challenge of developing a taxonomy of the incredibly rich diversity of species. But, as Janzen points out, many of the experts in taxonomy are getting older and passing on.

A very exciting technology under development that will remove all of the grunt work in naming various species of life is a scanner that can read the DNA of plant and animal species collected. Available for only a few dollars, this scanner can read the leg of a butterfly and, like the barcode at the supermarket or on smartphones, be able to map the DNA of the species. Prior to the present, species' taxonomy was based on the size, shape and color of their body parts.

What the barcode of life offers is an approach to the understanding and appreciation of the natural world unprecedented even by non-experts. Imagine a database where heretofore secrets of nature can be opened up for the first time. As Janzen argues, until we understand the ecology of a region, we cannot appreciate it. And if we cannot understand or appreciate anything, how can we feel any kind of affection or bond toward it? And if we cannot feel any affection toward it, why would we be motivated to protect it and see its intrinsic value?

Loss of biodiversity and biophilia

An article published in the May 2 issue of Nature provides evidence that loss of biodiversity impacts ecosystems as much as climate change and pollution. An essential element of habitat preservation is the understanding and appreciation of the role that all life forms in that ecosystem play in the health of that ecosystem. When there is pressure to clear-cut, to farm or to mine an area of rainforest or nature preserve, there is often conflict between short-term economic profit and leaving the ecosystem as it is. Unless an appreciation for that ecosystem can be cultivated, that ecosystem will continue to degrade, with all of the consequent environmental impacts.

Biophilia represents, according to E.O. Wilson, the human "urge to affiliate with other forms of life." In order to foster this innate love of God's creation and see its intrinsic value, we have to be creatively in relation with it.

Just as the cellphone and the World Wide Web have enabled folk from across the globe to forge a kinship with one another previously unimaginable, so the barcode of life will enable us to develop a new appreciation and recognition of our kinship with God's creation. And if in the process of slowing down the clear-cutting of the rainforest, carbon sinks are maintained, new medicines are found, species are discovered and traditional ways of life are preserved, we are all the richer for it.

EarthBeat | Biophilia and the barcode of life