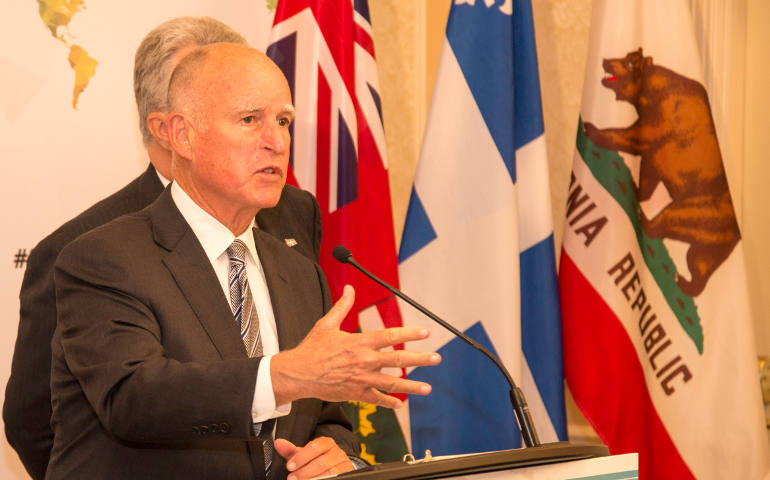 California Gov. Jerry Brown talks to media at a July 8 press conference at the Climate Summit of the Americas in Toronto. Brown is in Rome for a conference July 21-22 on climate change, human trafficking and the U.N.'s sustainable development goals. (CNS photo/Michael Swan, The Catholic Register)

Elections, like profit reports, have regular short-term rhythms, which is why Pope Francis' encyclical letter on the environment was so "appropriate and absolutely essential" for waking people up to the dangers of climate change, said California Gov. Jerry Brown.

"The world is going its merry way, with a few notable exceptions, and climate change is building up in very soon-to-be irreversible ways that will very dramatically increase human suffering," the 77-year-old governor told Catholic News Service in Rome.

Brown was scheduled to speak July 21 and 22 at meetings organized by the Pontifical Academy of Sciences on climate change, human trafficking and the U.N.'s sustainable development goals. Most of the participants were mayors from about 60 cities around the world.

In the encyclical, “Laudato Si’, on Care for Our Common Home,” Francis had written specifically about the role and responsibility of politicians in enacting policies to safeguard the environment and counteract climate change.

"In the absence of pressure from the public and from civic institutions, political authorities will always be reluctant to intervene, all the more when urgent needs must be met," the pope wrote. "To take up these responsibilities and the costs they entail, politicians will inevitably clash with the mindset of short-term gain and results which dominates present-day economics and politics. But if they are courageous, they will attest to their God-given dignity and leave behind a testimony of selfless responsibility.

Interviewed July 19 at the residence of the U.S. ambassador to Italy, Brown said, "I don't think it's any harder for a politician to think longer-term than it is for a businessman; they are both interested in short-term perspectives."

But on climate change, the governor said, "if we keep on the path we are on now, millions and hundreds of millions will suffer and die. So there is an inter-generational responsibility to those who are not born yet."

The governor said Francis' encyclical made a point of showing how concern for human beings, for poverty, for development and concern for the environment are connected. Yet, when asked about his position in favor of legal abortion, he pointed out that "many people" do not agree with the pope's position.

"But one thing with climate change, if you don't do anything about it, you will not be around to talk about pro-life or anything else because there will be such disruption in the climate patterns," he said. "Poverty and climate disruption are overarching issues that if not dealt with will make everything else much, much worse."

"The fact is that the popes give counsel on doing good and avoiding evil," he said, but "it doesn't necessarily mean they expect that everybody's going to become virtuous.

"Right now the response to climate change is inadequate and in many countries, it's completely inadequate, so we need new voices. And one of the new voices is Pope Francis," he said.

"This intervention by the pope," Brown said, "is appropriate and absolutely essential to wake people up to the dangers of climate change and to the value of seeing human beings as part of nature and dependent on nature as opposed to be adversaries of each other."

The governor also spoke about Francis' visit to the United States in September and the scheduled canonization of Blessed Junipero Serra, a Franciscan missionary who founded a string of California missions. Some Native American groups and others have criticized the canonization, saying that Blessed Serra and the other Franciscan missionaries maltreated Indians at the missions and contributed to the destruction of the indigenous culture.

While Brown said he cannot speak for all 39 million Californians, "I think it's quite an event."

The governor called Blessed Serra "California's first saint" and said, "he showed a lot courage. The pope is right in recognizing his sanctity."

Despite some attempts to remove a statue of the Spanish-born Franciscan from the U.S. Capitol, Brown said, "we're going to keep his statue in Congress. It's done as far as I'm concerned."