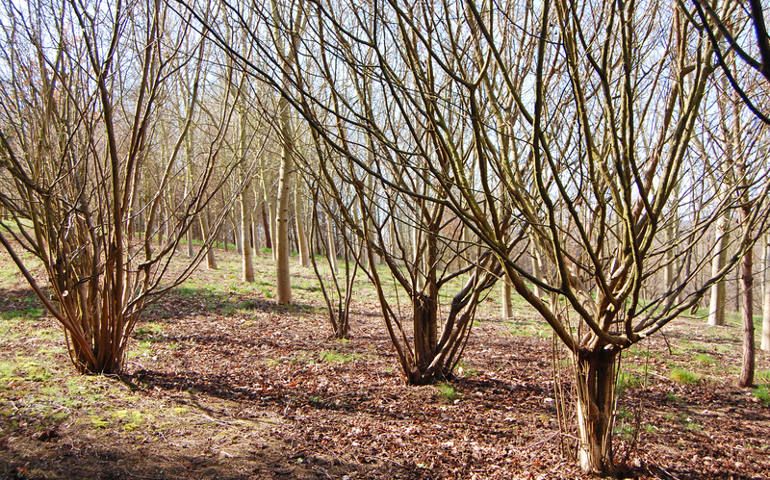 Coppiced trees in England during the spring 2012 season. (Dreamstime)

Winter may be -- slowly -- melting away, but it remains on my mind.

That’s partially because of Mert, the hero of Mert, the Anxious Evergreen, a children’s Christmas story written and illustrated by Claire Bowman. I wrote about the book in December, yet I can’t forget it because of its dual-season appeal. Beyond Christmas, Mert’s story has strong Lenten and resurrection underpinnings, too.

A recap of Mert’s story:

The young sapling left his home, Hickory Flats farm and forest, to become a majestic Christmas tree. After landing in the home of local baker Sally and saving the forest from development, Mert’s holiday adventure comes to an end, as does his vitality. Spoiler alert: Like all Christmas trees, his trunk begins to seal and a weakened Mert returns to the forest for a long sleep. However, the next winter, Mert’s friends revisit his stump, they are surprised to find their favorite evergreen alive and sprouting new branches.

Three months and numerous readings later, the story still brings tears to my eyes, but also had me asking, can trees really regenerate in this way?

As it turns out, the author Bowman did her research. It is called coppicing, a special pruning and cutting technique that dates back thousands of years to the Neolithic period.

According to the MidwestPermaculture.com, the technique is one of two pruning methods (the other pollarding) that allows for continual, healthy wood harvesting from the same trees, often for centuries.

“The concept is simple: by cutting a deciduous tree when it is dormant, you allow it to send up fresh shoots in the spring. These are harvested again when they reach the desired size -- anywhere from 4 to 25 years,” the site explained.

Records of coppicing date back as far as 1251, when it was used in the forests of the U.K.’s East Anglia region. According to MidwestPermaculture.com, “Pre-industrial Europeans thought it was a waste of human energy to grow a tree to a huge size just to kill it, split it, and have to replant it.” The site says the benefits of coppicing extend to creating a renewable, carbon-neutral energy source.

What’s not to like? Coppicing gives the gift of sustainability to the land, as well as an extended life, a kind of immortality, as it were, to the tree.

Could it be that we humans, animals, the elements -- everything that exists -- might be cosmic forms of coppicing, designed that way on purpose by a Divine Coppicer?  Quantum physics tells us that nothing really dies or is wasted.

Mert dies, and is taken back to his old tree stump in his beloved forest, next to his loving mother. And he grows new shoots. He is once again alive, though not as a brightly bangled, artificially illuminated decoration. He has returned to his source, to his home, to his soul.

The templates of who we are dwell in our souls. We are born, live our lives, but eventually our essences go back to the forest of Our Lord.

We, too, each experience our own daily deaths and resurrections on this earthly plane before we literally leave it, through the big transition, when we are changed into something totally new.

Death, resurrection and coppicing happen each time a new, oft-unpleasant truth smacks us in the solar plexus, causing us to change course. We experience them each time we are able to move from pain to joy, loneliness to acceptance, hatred to love. As Sufi teacher Neil Douglas-Klotz writes, when we are able to soften the rigidity within, transformation happens.