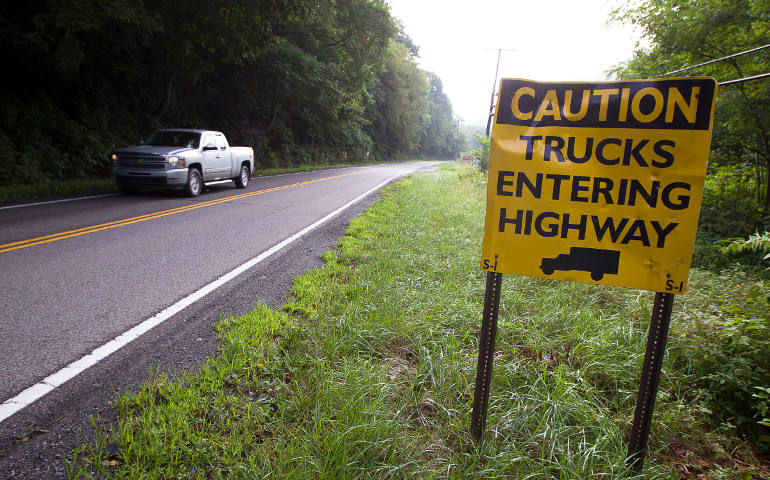 A sign advises drives of a coal truck entrance on West Virginia Route 3 near Naoma, W. Va., Aug. 19. Throughout the mining region of central Appalachia, mountaintop removal mining has flattened more than 500 mountains and led to more than 2,000 miles of steams being filled in, according to The Alliance for Appalachia. (CNS photo/Tyler Orsburn)

A strikingly beautiful leg of West Virginia Route 3 passes through one of the richest coal mining areas of the country.

These days, however, the mining is limited.

And without mining the communities are struggling.

Take Whitesville. It appears to be a town in mourning. Abandoned storefronts, darkened traffic lights and watchful police are the norm.

And there's a stark reminder of mining's dangers.

Alongside the road stands a long black granite memorial honoring the 29 workers killed in the April 5, 2010 Upper Big Branch mine explosion a few miles south of town. It was the worst U.S. mining disaster in 40 years.

On a recent drive through the valley, Junior Walk, outreach coordinator at Coal River Mountain Watch, pointed to the unmarked roadway leading to the now-closed mine. A former security guard at a different mine, Walk, 24, believes the tragedy illustrates the coal industry's disregard for worker rights and safety. For 150 years, he said, miners have sacrificed their health and their lives for industry profits only to be left poor and destitute in many cases.

Federal and state investigators concluded that numerous and repeated health and safety code violations were largely responsible for the blast.

The association canceled an interview with Catholic News Service and declined to reschedule it.

The loss of mining jobs and the lack of diversity in the West Virginia economy have taken a toll.

"The fact is that (West Virginia) is one of the poorest states in the union. We have some of the poorest counties in the country," Bishop Michael J. Bransfield of Wheeling-Charleston told CNS.

"Our people are wonderful. It's just that employment is very low and in certain places extremely low. Other places it's good, but then it gets very, very poor. You really don't have to go far to find poverty in a lot of the area of West Virginia," he said.

Carol Bailey, regional director for Catholic Charities West Virginia in the Mercer County town of Princeton, a few miles north of Virginia, said generational poverty, combined with a lack of education among residents, a scarcity of jobs and little economic diversity outside of mining, are major concerns. Next door in McDowell County, poverty is particularly acute, she said.

"I grew up in McDowell County and moved to Mercer County in my 20s. I've seen it go from a very prosperous when the coal mines were operating and everyone was working to just almost a ghost town. And the floods in the early 2000s kind of finished off what the coal mining's leaving has done," Bailey told CNS.

Statistics compiled by the Appalachian Regional Commission this year show that the poverty rate in McDowell County hovered at 33.5 percent from 2008 to 2012. Statewide, poverty averaged 17.6 percent during the same period.

In comparison, only the Appalachian areas of Mississippi, Kentucky and Alabama had more poverty: 22.3 percent, 18.6 percent and 18.1 percent, respectively.

Deep and persistent poverty has led to a feeling of hopelessness in McDowell County, she said.

"That's the sad part, to see these children hopeless at such a young age," she said. "It's sad that they have to leave to find opportunity or employment."

Recognizing the need for an economic boost to the state, the federal Bureau of Prisons opened a medium-security prison in McDowell County in 2010. The idea was quickly embraced when it was proposed several years earlier because residents saw the opportunity for construction and long-term prison jobs. But West Virginia Public Broadcasting reported that of the first 87 people hired, 12 were from McDowell County and five were from neighboring Wyoming County.

Bransfield has addressed the effect of poverty on children, health and behavioral health in pastoral letters since 2006. He said such concerns weigh heavy in his work.

He also said that if the country is going to be less dependent on coal for power generation and other needs, then plans must be developed to ensure a transition to new industries so that people can find gainful employment.

"I think the attitude is 'Let's just look at the ecology, this study, this system,' and say 'This is not allowed' or 'We're going to tax it to death,'" the bishop said. "But we (in the United States) don't necessarily see the relief of those workers as part of our agenda."

Editor's Note: This is the fourth story in a six-part Catholic News Service series examining mountaintop removal mining and poverty in Appalachia​. Check Eco Catholic for past and upcoming stories in the series, or sign up for email alerts to receive them in your inbox.