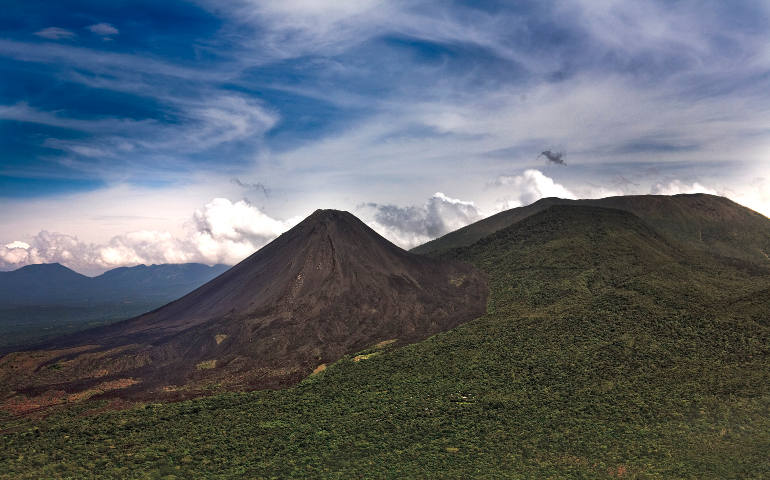 An aerial view of Izalco and Santa Ana volcanos in 2008 in El Salvador. Marking the celebration of Earth Day, Pope Francis asked that everyone recognize the earth as God's gift to protect and cultivate, sharing the world's natural resources. (CNS photo/O ctavio Duran)

See the world through the eyes of the Creator, Pope Francis said at the end of his general audience in St. Peter's Square on Wednesday, marking Earth Day.

“I exhort everyone to see the world through the eyes of God the Creator: the earth is an environment to be safeguarded, a garden to be cultivated,” he said.

“The relationship of mankind with nature must not be conducted with greed, manipulation and exploitation, but it must conserve the divine harmony that exists between creatures and Creation within the logic of respect and care, so it can be put to the service of our brothers, also of future generations,” the pope said.

In his universal prayer intention for April, Francis prayed “That people may learn to respect creation and care for it as a gift of God.” On Tuesday, he said on Twitter:

We need to care for the earth so that it may continue, as God willed, to be a source of life for the entire human family.

In addition, the Global Catholic Climate Movement has designated April as Care4Creation Month and has produced resources and prayers that communities can use in observing it.

Since its beginning in the U.S. in 1970, Earth Day has grown into the largest worldwide civic observance, according to the Earth Day Network, which estimated more than 1 billion people participate in activities each April 22.

Earth Day was the brainchild of U.S. Sen. Gaylord Nelson of Wisconsin, who sought a way to place environmental protection on the national agenda at a time when pollution was compounding. The Democratic senator enlisted college students to organize and coordinate the day. More than 20 million Americans attended Earth Day festivities on April 22, 1970, aligning a broad spectrum of cohorts: Democrats and Republicans, urban and rural communities, labor and business leaders.

The energy that surfaced that day has been credited with spurring the creation of the Environmental Protection Agency (1970) and the passage of signature environmental legislation, such as the Clean Air Act (1970), the Clean Water Act (1972) and the Endangered Species Act (1973) -- all initiatives enacted under President Richard Nixon.

Earth Day has since expanded to 192 countries, according to the Earth Day Network.