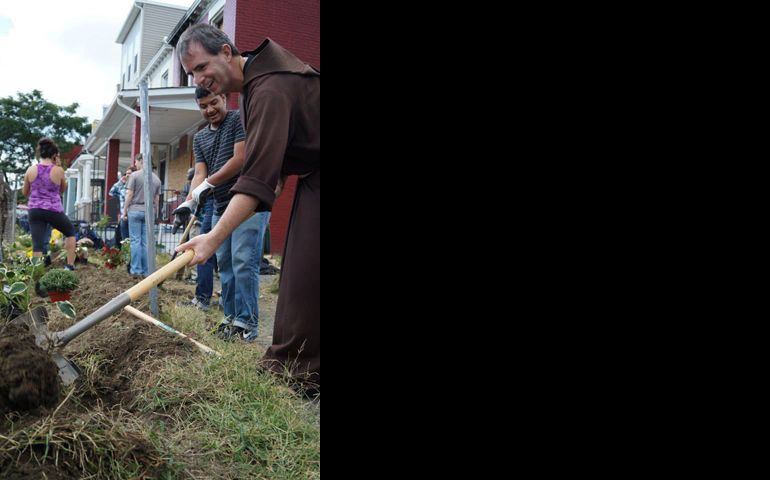 The action was illegal, but they did it anyway. They trespassed on private property to perform a good deed St. Francis of Assisi would have loved, since their task was in keeping with his belief that "the deeds you do today may be the only sermon some people will hear today."

Twenty strong, a few wearing the robes of Franciscan friars, they took turns squeezing through a gap in an old -ink fence. Their destination on the other side was an abandoned parking lot and a boarded-up church and house.

They did not come to vandalize or add to the brokenness around them. They came to help heal the earth and bring beauty to this one little pocket of absentee landlord neglect at Georgia Avenue and Park Road, three miles from the White House.

They came bearing shovels, hoes, rakes, mums, daisies, hosta, tulip bulbs and a dwarf crepe myrtle tree. Officially, their actions have a name. The group was engaging in guerrilla gardening, the practice of planting flowers on abandoned property without the legal right to do so, said Lonnie Ellis, director of organizing and development at the Franciscan Action Network, the Earth Corps' sponsor.

Worldwide, guerrilla gardening's devotees number in the thousands. Their flowers, herbs and vegetables thrive in a host of locations, including Southern California, San Francisco, Berlin and Miami, according to a May 2008 article in the Los Angeles Times.

Ellis said guerrilla gardening "might seem like an odd thing for Catholics to incorporate into their faith practice," but he said Earth Corps members were energized to adopt it as a spiritual practice by none other than Pope Francis. During recent World Youth Day festivities, Francis told the crowd to "make the future with beauty, with goodness and truth ... have courage. Go forward. Make noise."

So on Equinox Day, members of the Earth Corps did just that, much to the gratitude of neighbors, who cheered them on. They had every reason to be happy, Ellis said: The parking lot and buildings had been abandoned for more than a year and had become a hangout for drug dealers.

That afternoon, two neighborhood youngsters helped with the digging, and a woman "brought us a flowering plant." A man who lives next door to the church promised he would take care of the flowers, according to a news release from the Franciscan Action Network.

As they planted, Fr. Kevin Thompson, a Capuchin friar from Sacred Heart Parish in D.C., prayed "that this action of beautifying a forgotten place can be a spark."

Sacred Heart is Ellis' parish. Earlier that day, when Ellis announced at Mass that his group would be breaking the law, "everyone cheered," including one conservative guy, who said, "I like what you're doing," Ellis said.

The Earth Corps had also invited the Rev. Lennox Yearwood, president of the Hip Hop Caucus, to be there for the planting. Yearwood, whose national group is involved in voting rights and green activism, spoke to the guerrilla gardeners about the significant role people of faith have in the climate change struggle. He applauded the gardeners' nitty-gritty efforts, saying, "We must fight poverty and pollution at the same time and bring hope to communities where there is no hope," according to the Franciscan Action Network's release.

Ellis said the guerrilla gardening event was intended to be a witness for creation care in the streets and the neighborhood. It is a much-needed supplement to the more formal kinds of organizing that bring concerned citizens into the corporate boardrooms.

"We believe in making an impact around climate change but that it is also necessary to keep the momentum going all along the way, where people live and work," Ellis said.

Sunday's guerrilla action did not attract the police, Ellis said. However, some of those from the colleges who had gone to Ellis' organizational training day Saturday "didn't join us because technically, we were trespassing."

Forty young people and clergy who came to the training and/or guerrilla gardening hailed from Syracuse and the Bronx, N.Y.; Hartford, Conn.; Little Rock, Ark.; and Charlottesville, Va.

Andre Rivera and Kelly Moltzen from the Bronx stayed to be a part of the guerrilla gardening. Rivera, 19, a full-time college student at Boricua College, said he has done similar actions at home.

"Sunday was exciting, and it was well worth the cause," Rivera said. "I hope that the gardening demonstrated to the community that you don't have to rely on the government to improve your community but rather that you can get involved and make a difference."

Moltzen, 26, a nutrition specialist with Bronx Health REACH, said: "I loved getting my hands in the soil today with the Franciscan Earth Corps. We can and should advocate politically on climate change, but sometimes it's the direct caring for God's creation that brings real hope and beauty to a neighborhood."

It is so easy to forget about nature when you live in an urban area, she said, but gardening together helps people get back in touch with the earth, and the community building that results reconnects them with hope and helps cut down on violence.

Fr. Fred Ball, pastor of San Damiano Ecumenical Catholic Church in Little Rock, was unable to stay for the Sunday gardening, but he wrote in an email that "it was a wonderful way of 'waging peace' by infiltrating with beauty a part of God's house (creation) which had fallen into disrepair. As you know, the call to St. Francis from the crucifix at San Damiano was to 'go and repair my house, which you see is falling down.'

"Like St. Francis' original efforts to rebuild the little church at San Damiano," Ball wrote, "this project was more than the beautification of one abandoned spot in the city. It was a living parable of the Franciscan way, actively engaging a broken world and transforming it, one flower at a time."

Ball is a priest with the Franciscans of Reconciliation, which is part of the Ecumenical Catholic Communion, which is not Roman Catholic. He praised the Franciscan Action Network for the way "it transcends jurisdictions, bringing together Franciscans from throughout the Church to work together on behalf of the world."

He wrote that he expects to engage in some guerrilla gardening as his parish "develops the Franciscan Earth Corps here in Central Arkansas."

Back in Washington, D.C., Ellis said the Earth Corps' next project will be to sponsor retreats and will include nature walks to remind people of the beauty of God's creation. For more information about the Franciscan Earth Corps, go to franciscanaction.org.