On Oct. 17, 2009, I received a call from my maintenance man at St. Elizabeth in Wyandotte, Mich. A woman wanted to talk with me. Since I was on my way to a wedding rehearsal at a parish 30 miles away, I told myself that I had a few minutes. Little did I realize how powerful that encounter with Jeanne Ingram would become. Jeanne's mother, Bereth, had just died and Jeanne was literally searching high and low for a cemetery that would honor her mother's wishes to be interred without any kind of chemicals or vaults. 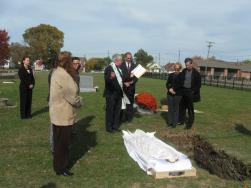 Jeanne had fashioned a shroud out of a tablecloth she had purchased in her travels in Damascus and brought along water from the Jordan River, which she poured into the grave. As we lowered Bereth's body into the earth with the assistance of the family, I heard gasps from the mourners as their eyes gazed heavenward. There, circling the gathered mourners was a hawk with a 3-foot wingspan soaring into the heavens.

A scant 20 months later, we buried Bereth's son, Mark. Since there was no vault, we were able to put the body of Mark, also shrouded, into the same grave. Subsequently, the green section, bordered by switchgrass, Black-eyed Susan and echinacea -- all plants indigenous to that part of Michigan -- has witnessed other green funerals.

What are green burials?

Green burials are burials that forego vaults, traditional embalming fluid and metal caskets. Green burial caskets are of simple construction and made of sustainable material such as bamboo or pine. A shroud may replace a casket. Because there is no vault, there is the possibility, especially with shroud burials, for two bodies to be put into one grave. Toxic chemicals are avoided and there is a lower ecological footprint than with the customary American burial ritual.

The Green Burial Council is a 501(c)(6) established to promote the green burial movement, to serve as a clearing house of information and to provide standards for the industry to protect the consumer from greenwashing, where a business uses deceptive PR to market itself as "green" while using processes that are anything but. (Editor's note: Fr. Charles Morris is a member of the Green Burial Council's advisory board.)

A perusal of the Green Burial Council's website shows a state-by-state list of funeral homes, cemeteries and manufacturers that meet industry standards as well as sources of media coverage.

Burial grounds can include hybrid cemeteries, which are traditional cemeteries that have allocated space for vault-less and chemical-free burials. (The Green Burial Council has certified a plant-based embalming fluid that is biodegradable.) But they also can include natural burial ground and conservation ground where the ground is dedicated to chemical-free and vault-less burial with an integrated pest management system. In addition, with a conservancy burial ground, there is a long-range trust or conservancy to maintain the natural setting in perpetuity.

A green burial carries a lower ecological footprint. Toxic chemicals used in the embalming process are eliminated. Vault-less burials and simpler material from renewable materials create much less embodied energy. And unlike cremation, which releases some greenhouse gasses in the incineration process, green burials release little to no greenhouse gas. And the nutrients that are in our bodies are recycled back to the earth.

Most of the non-English speaking world buries loved ones in simple caskets without embalming or vaults. What is unique about the funeral business in the United States?

Our approach to bereavement and burial has its origins in recent history. The common practice of embalming started in the American Civil War to preserve Union soldiers' bodies as they were returned by train to their families. The use of vaults began in the 1930s with the use of back hoes to dig graves after concerns arose about caving of the ground above the grave. The requirement of vaults, at least in Michigan, is not state law but is the standard policy of most cemeteries. I might add on a personal note that none of the four burials I have witnessed at Mt. Carmel Cemetery resulted in any kind of sinking.

It's true that burials with simple shrouds and caskets that forgo viewing and embalming, burials without the use of vaults and the possibility of two bodies sharing a grave can result in greatly reduced costs for a funeral, up to 50 percent. But the spiritual benefits, I contend, are even greater.

What have we gained in practical convenience that we might have lost in spiritual depth as we face the greatest of all human mysteries: death? In bringing about a deeper reverence for the body of our loved ones, aren't we also honoring the sacredness of their life? Green burials, from my experience, are witness to the reality that we, indeed, are a part of creation, and not apart from it. And of course, the most famous burial of all was a shroud burial. To give ourselves back completely to God's earth reminds me of the beautiful passage in Philippians 2:6-11, where Paul eloquently speaks of Christ's emptying of self for our sake.

On June 10, the leadership of the Green Burial Council invited Rabbi Stuart Kelman and me to address a conference of Jewish cemetery directors from across the country in Los Angeles. There was recognition among those gathered at the conference that people are beginning to rethink how to say goodbye. We are rediscovering a truth our forbearers knew instinctively -- there is a sacral quality to natural disposal. There is a saying that how we die speaks eloquently about how we have lived. How we put to rest with dignity those we have loved and cherished can carry a countercultural witness to a society that is increasingly out of touch with the reality of death.

If you are interested in learning more about the green burial movement or would like to volunteer at the Green Burial Council, go to the council's website or call them at 888-966-3330.

Previous coverage: Lay your loved ones to rest the natural way