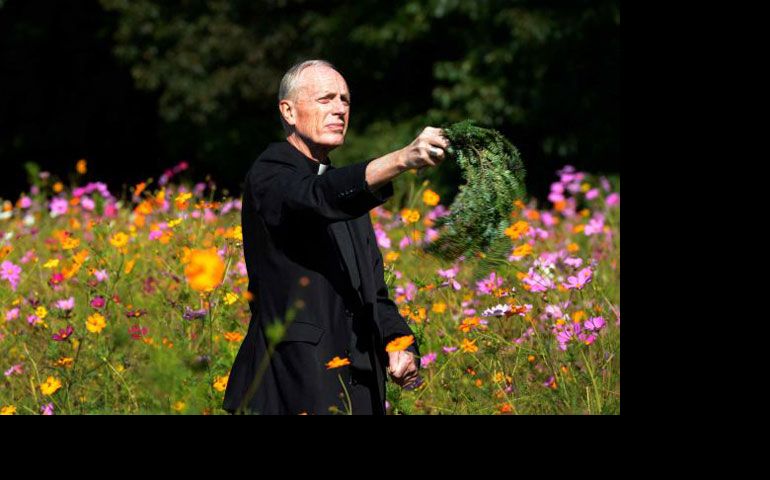 Growing up in small-town Georgia, John B. Johnson had family friends who ran the funeral home down the street, so the particulars of a typical American funeral -- the embalming, the heavy casket and remarks about how great the deceased’s hair looked -- were all familiar to him.

When the time came, he assumed, his funeral would look much the same.

But Johnson, now 44, envisions a different sort of send-off for himself: a “green burial” that draws both upon his faith and his commitment to the environment. For Johnson and others like him, a green burial is a way to care for the Earth and answer to the part of his soul that recoils at the pomp of the average American funeral, and takes seriously the biblical reminder: “For dust thou art, and unto dust shalt thou return.”

“It’s the notion that Jesus was so humble,” said Johnson, an Episcopalian who lives in Washington, D.C. “I am a follower and I want to follow that example. I want my death as humble as I think Jesus lived.”

Johnson wants to skip the embalming fluid, which often contains methanol, ethanol and formaldehyde -- a suspected carcinogen. He wants a plain pine box. And he would just as soon skip the grand procession, led by a gas-guzzling hearse.

[Related: "Cremation is popular, but is it green?"; ​“Green burials offer ecological, ancient way to say goodbye to loved ones”; "Lay your loved ones to rest the natural way"]

There are no solid statistics on how many Americans choose green burial. But an indication of its rising popularity comes from a 2007 AARP study, which found that nearly one in five Americans age 50 and older who have planned for a funeral have considered a green one.

The stereotype of these people, said Joe Sehee, who founded the nonprofit Green Burial Council, is of a “Prius-driving member of the eco-chic” -- a person who is well-educated, environmentally conscious, liberal and not too keen on organized religion.

But the stereotype, said Sehee, a former Jesuit lay minister, ignores a whole group of people who seek green burial in great part because of their religious or spiritual convictions. Sehee, whose group sets standards for green burials, has worked with Catholic priests, rabbis and others who see it as an alternative to the funeral industry and a return to their religious traditions.

Green burial, Sehee said, recognizes that “there’s death, but there’s rebirth associated with it. And we don’t see any connection between death and life in traditional death care.”

Or, in the words of Maureen McGuinness, family service manager of upstate New York’s Most Holy Redeemer Cemetery, green burial “is a way for families to talk about resurrection.”

After fielding numerous requests from Catholics looking for a green burial, the diocese of Albany set aside a wildflower-filled meadow at Most Holy Redeemer -- one of its 16 cemeteries -- and blessed it as a green resting place in September 2012. So far, 35 people have purchased grave sites, and about half of those have been used.

“When grandma dies and you come to this place, it’s all filled with life,” McGuinness said.

As in all Catholic cemeteries, the bodies interred in green graves at Most Holy Redeemer receive traditional Catholic rites.

But there is no embalming, or when it’s used, it’s done exclusively with Earth-friendly chemicals. The caskets are made of untreated wood or other natural materials. For grave markers, the deceased’s name is sandblasted into a cobblestone. Deer and wild turkey roam the meadow, which is named for Kateri Tekakwitha, the first Native American Catholic saint.

The price of green burial is often lower than typical burials, sometimes by hundreds or thousands of dollars, McGuinness said, because there is no embalming and the casket, if there is one, is simple. Green burial also forgoes the concrete burial vaults into which caskets are placed.

The Green Burial Council has certified nearly 400 providers in 46 states. Some of them have religious orientations. And even some that are not certified consider themselves already green because their faiths have for millennia taken an ecologically friendly approach to death. Muslims and Jewish traditions, for example, eschew embalming and require quick burials. A kosher casket is a plain wood box made without metal hardware. Muslim tradition specifies a simple shroud and does not require a casket.

But Sehee said religious funeral professionals often fall short of embracing their green religious traditions. He knows of Jewish cemeteries that require burial vaults and he has heard an imam lament that a funeral director serving his Muslim community pushes metal caskets.

“And there are Catholic cemeteries that won’t accept a body in a shroud, even though Jesus was buried in a shroud,” Sehee said.

Gilbert Becker was buried in a flannel shirt and overalls, the clothes he used to wear hunting, camping and fishing with his family. After he died last September, his Christian family placed his body in a casket carved from a fallen tree by his son and interred it in the woods at Green Acres Cemetery near Columbia, Mo. It just made sense, said his wife, Suzanne Becker.

“Gilbert and I always felt most close to God when we were out in the mountains or in the woods,” she said.

What “better place to camp out,” she said, “until the good Lord brings us up.”