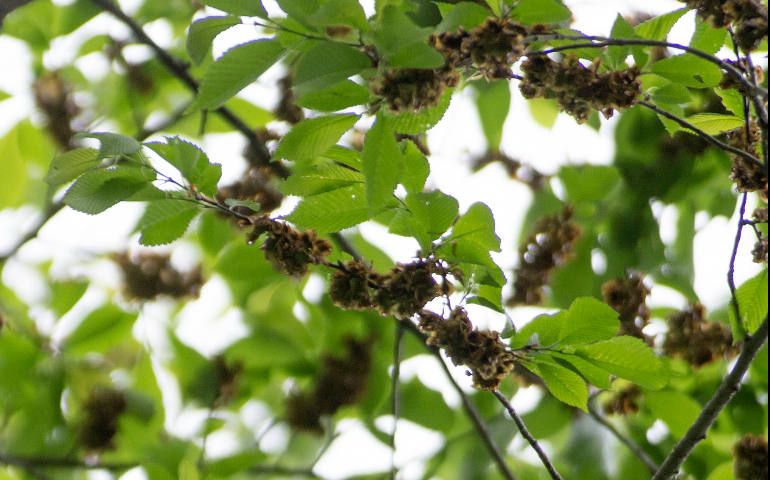 On the day a major U.S. political party for the first time nominated a woman for president, I was sitting around in a lovely room at The Nature Institute in Ghent, N.Y., examining a leaf.

I was not just examining a leaf but examining a leaf in depth. There were 30 of us in the room at an occasion for religious entrepreneurs sponsored by Etsy.org, the non-profit arm of the e-commerce website of the same name. Our teacher Craig Holdrege, author of Thinking Like a Plant, was teaching us how to look at a leaf. We all picked one from the same tree, each of us staring at our individual leaves for 10 minutes. Then we passed our leaves around. And then something planted in almost all of us.

I had given the opening devotion that day from a Lewis Mumford poem, “Dragon Fly.” One of its prescient lines read like this: “Now there are grown-ups around, hurrying, who never saw one and do not know what they are not seeing.”

The reasons for this leaf gazing process were founded in great thinkers like Mumford and Johann Wolfgang von Goethe, argued Holdrege in Thinking Like a Plant. So many of us do not know what we are not seeing. We need new glasses.

Mumford put it this way, “Nothing will produce an effective change but fresh transformational thinking, already begun in the human mind.” Goethe put it another: “To understand nature we must become as alluring and flexible as nature itself.”

Holdrege was arguing that personal transformation is crucial to the world’s transformation. We have to learn to see what we don’t know how to see in order for the world and its next steps to reveal itself.

I know transformation is a popular word these days, and I know a lot of environmentalists think we have to change before the world can change. And I wonder if I agree.

Holdrege didn’t know I was going to read that poem. And I didn’t know he was going to ask us to examine our leaf in detail for 10 minutes, describe it in 10 words, and then pass the leaves through the entire circle so we could then examine everyone else’s leaf. I wasn’t prepared for my skepticism about his theory to meet my experience of the leaf.

As it turned out, I became very attached to my leaf. When it finally got back to me, after I had looked at 29 other leafs ever so briefly, I was mightily relieved. Indeed, doing something “different” changes us and we realize that we have a strong case of biophilia – an innate connection among humans and other living systems, as biologist Edward O. Wilson defined it in his 1986 book.

Of course, there are rival theories for environmentalists. If Shell and Monsanto would just get their big profit-making boots off our backs, then we’d learn to live differently. It’s about transforming them, not us. So we advocate for renewables instead of fossil fuels, and we get arrested over the Keystone XL pipeline. We eat and purchase certain kinds of foods and not others. We organize.

Others, like Holdrege, believe that a simple increase in biophilia would work. Would we really have to be so very different than we are for the world to be clear and clean? Couldn’t we just love it more? Do we also have to see it and us differently? Is that not way too tall an order for somebody with a boot on his or her back?

I promise not to tell anyone if you’ll also so promise. I am bored with politics, bored trying to fix “them.” Why am I bored? Because I don’t know how. I pretended to be interested in the political conventions and ongoing campaigns. I do know how consequential it is. I know it matters. I will surely vote. I have already sent in money.

But there was something in my attachment to that leaf that was not boring. It was romance, it was excitement, it was buzz. To see the whole world in a grain of sand? To leaf and leap through life as though it was beautiful? To have philia instead of its opposite, acedia (aka, boredom)?

Even those of us who aren’t sure we can transform ourselves or each other, much less the world, have one thing in common. We don’t want to be bored. We want to love a leaf. And we don’t mind learning, either.

Thank you, Craig. I think I am learning to think like a plant.