The dedication to environmental causes of the Sisters of St. Francis' in Sylvania, Ohio, gives their saintly founder every reason to be proud.

In 2009, Srs. Jeremias Stinson and Grace Ellen Urban built a polyhouse, a plastic greenhouse-type garden that produces vegetables year-round, and give their harvests to a Toledo soup kitchen. 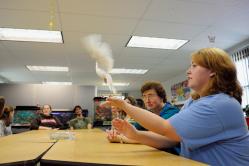 And over at Lourdes University, located on the same motherhouse grounds, Sr. Rosine Sobczak directs the Life Lab, a community outreach program that has provided hands-on natural science education for youngsters in kindergarten through eighth grade since 1989.

Each year, approximately 3,000 kids visit the lab to meet box turtles, frogs, lizards, a talking African Grey Parrot, cockatiels, finches, ground squirrels, bunnies, butterflies and other creatures. The program works in conjunction with the Ohio science teachers' curriculum and is seasonally based. The Life Lab also sponsors four one-week science camps for fifth- through 10th-graders during the summer.

A vision of the Life Lab first appeared in one of Sobczak's dreams.

"There was a classroom that was alive, colorful, full of posters and animals and plants," she said. "I was sitting at the teacher's desk. Then I woke up."

She wondered what was going on. In waking life, Sobczak, an associate professor of biology at Lourdes, taught college-level microbiology to nursing and pre-med students.

The dream came to Sobczak while she was training to become a spiritual director. The more she dove into mysticism and contemplation during 1987-89, the more "Earth called out to me," she said.

One day, her spiritual director, Immaculate Heart Sr. Martha Rabaut from Monroe, Mich., invited her to go to Port Burwell, Ontario, to hear Fr. Thomas Berry speak. As they listened to Berry's reflections on the urgent necessity for earth's care and the interconnectedness of all things, Rabaut asked Sobczak, "Does this feel right?"

Sobczak's reply: "I felt like I had come home."

But how did Berry and Sobczak's dream factor into the future?

Just keep praying, her mom and friends counseled. She did, and one day, Linda Penn walked into Sobczak's office.

Penn, a naturalist at the former Crosby Botanical Gardens in Toledo, taught life cycle classes to children in her butterfly garden for more than a dozen years. Before she worked at the botanical gardens, she had introduced creepy crawlies and winged creatures to children at her nursery school. By 1989, her highly popular program was bursting at the seams. Penn needed a larger space.

"My doves had just had babies and they were cooing," Penn said. "A male katydid was making his 'tick tick' sounds to attract a female."

The melody was not lost on Klimkowski, who realized Penn's program could help bring Sobczak's dream to life. She suggested that Penn drop by to see Sr. Sobczak.

Sure enough, Penn was the answer.

Klimkowski gave them a classroom. Sobczak and Penn wrote their first grant. A few months later, the Life Lab opened its doors. Pretty soon, the katydids and doves were creating a daily symphony in their new space.

In 1996, Marge Malinowski, a master gardener and a certified volunteer naturalist, joined the lab to teach "the higher animals" while Penn teaches life cycles. Sobczak directs the lab in addition to teaching her two microbiology classes each week.

Since its inception, the Life Lab has earned more than $1 million in Eisenhower federal grants to keep its program going, Sobczak said. In 2010, the lab moved to a larger space: two classrooms to house the animals, fish and insects.

Congresswoman Marcy Kaptur also procured a $140,000 grant from the Department of Education for the lab's expansion in 2002. Kaptur also arranged for teachers visiting from Russia and Hungary to visit the Life Lab and see what it was doing.

"The teachers spent time with us, and the Hungarians brought some of their students," Sobczak said. "They said they have never seen kids so happy."

A couple of local veterinarians keep the menagerie in good health, and Lourdes work-study student assistants come in daily to clean cages, feed animals and do trainings. These assistants teach the four-legged critters to stay on their little carpets in the middle of the classroom tables when they are surrounded by curious youngsters. The training process takes time and patience and involves a continuous ritual of gently bringing the animals back to their carpets if they leave them, then praising them, Malinowski explained.

Often, Toledo city kids come in quite frightened of the animals and insects, Malinowski said, but by the time they leave, they've become much more comfortable. Besides learning the basic anatomy, life span, reproduction cycles and habits of each animal, the students hear about the awe of creation, the wonder of all creatures and how important it is to be respectful of every living thing.

"No touching around the eyes, no tapping on the glass, no talking in a loud voice, and always be gentle," Malinowski and Penn emphasize to the students.

Visitors watch as Malinowski softly places a handful of mealworms down on a carpeted table to feed the lab's resident box turtle. Even when living things are destined to become lunch, they need to be treated with respect right down to the last minute, she explains.

Life Lab activities include an arts and crafts component where students make bugs from pipe cleaners and snowflakes from construction paper and paint. Tours of the 82-acre motherhouse grounds with its large forested area provide another close-up look at nature. 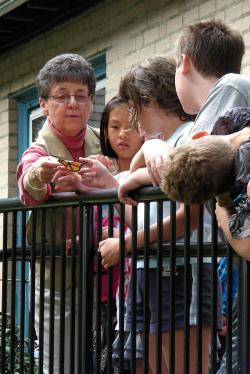 When a child sees a deer up close for the first time, it is truly a sacred moment, Malinowski said.

The Life Lab's outdoor component helps to further a sense of God's presence. There is a large garden that attracts a variety of birds -- including four types of woodpeckers -- as well as deer, foxes, red squirrels, groundhogs, chipmunks and raccoons. There are a number of water sources, and native plants, trees and shrubs provide food sources, places for cover and nesting spots for wildlife to raise their young. The garden, of course, includes plants to attract butterflies.

Sobczak remembers a couple of summer sessions when kids told her in their own inimitable ways how they had been affected by their trip to the Life Lab.

One little girl said she had been convinced that french fries grew on trees and had always thought she'd see one someday. Another child, entranced by the monarch butterfly perched on her hand, said to Sobczak, "I always saw these things in books. Now I know they're alive."

Some of the kids return, especially the older ones who have participated in the Life Lab's summer science camp.

"They want to help clean cages and visit their favorite animals," Malinowski said.

For Penn, this is powerful evidence that the Life Lab's mission, "to educate to appreciate," has taken root.

"If you learn to appreciate and love something, you will take care of it instead of destroying it," she said.

Thanks to Penn's work in helping butterflies survive, the Life Lab has been designated as a Monarch Waystation by Monarch Watch. It joins other waystations across Ohio and the rest of the continent that provide rest, shelter and food for the insects during their annual migration back to the mountains of Mexico.

Malinowski's garden and the Life Lab have been also designated "a certified wildlife habitat" by the National Wildlife Federation, the nation's largest conservation organization.