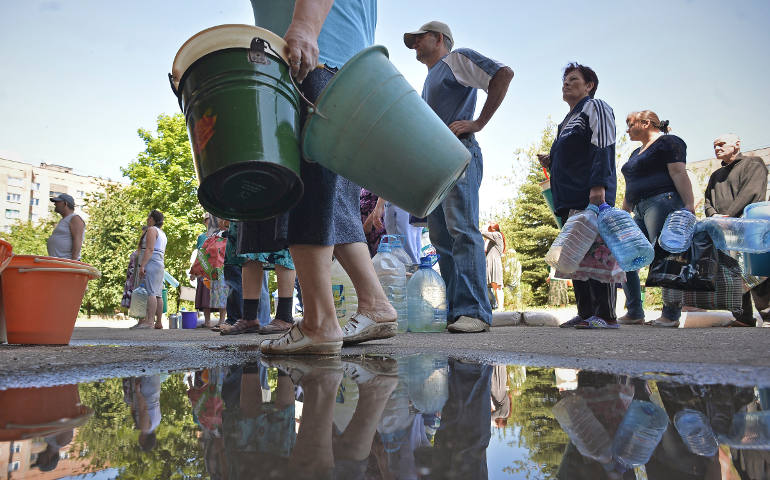 Residents near Kramatorsk, Ukraine, carry empty buckets and bottles to have them filled with potable water June 19, 2014, after a shelling from fighting with pro-Russian separatists reportedly destroyed a water supply system. (CNS photo/Valentina Svistun ova, EPA)

The future of humanity depends on safeguarding and sharing potable water around the world, Pope Francis said.

"I encourage, therefore, the international community to make sure the planet's water is adequately protected and no one is excluded or discriminated against" in the fair use of this resource, which is "the most essential element for life," he said Sunday after reciting the Angelus with visitors gathered in St. Peter's Square.

"The future of humanity depends on our ability to safeguard and share" clean water, the pope said, in marking World Water Day, an annual United Nations celebration to promote sustainable water management.

In his remarks before reciting the Angelus prayer, the pope said Catholics can offer people three things: the Gospel, the crucifix and the example of living out their faith.

In the Gospel, "we can encounter Jesus, listen to him and know him," he said, while the crucifix is the "sign of the love of Jesus, who gave himself for us."

Catholics should also translate their faith into "simple gestures of brotherly love" and charity in which the most important thing is to practice what one professes; one's faith and life, words and actions must be consistent.

About 50,000 free copies of a pocket-sized Gospel were distributed to those gathered in the square. The pope said he was offering people the gift so that they could carry it with them wherever they went and "read it often."

"The word of God is the light for our journey. It will do you good," he said, adding that the many volunteers handing out the books included hundreds of homeless people.

He said this, too, was a "beautiful gesture that is pleasing to Jesus: the poorest are those who give us the word of God."

Meanwhile, a Vatican spokesperson said the pope had cut back his schedule for the week in order to finish working on his encyclical on ecology, saying it was the stage of "final revision."

Passionist Fr. Ciro Benedettini said Monday the pope had no meetings or major events planned through Saturday except for the general audience Wednesday and morning Mass in the chapel of his residence.

During a news conference with journalists Jan. 15 onboard the papal plane from Sri Lanka to Manila, Francis had said he had sent a third draft of the encyclical to the Congregation for the Doctrine of the Faith, the Secretariat of State and the papal theologian for review "so that I would not say anything 'foolish.'"

He said he received a thick packet of their responses and that he planned to take an entire week in March "to complete it" with the hopes of finishing it by the end of the month.

Then if the translations go smoothly, he said, "it can come out in June or July," enough time to "make a contribution" to the United Nations Climate Change Conference meeting in Paris Nov. 30 through Dec. 11.