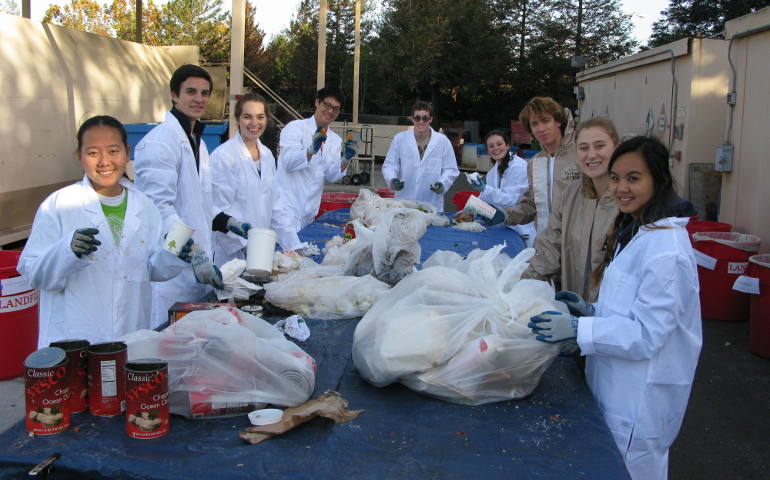 When graduating seniors at Santa Clara University, in Santa Clara, Calif., bid farewell June 13 to their alma mater, many will have signed onto a pledge to carry their school’s social and environmental consciousness into their future careers.

Endorsed by seven campus organizations, the promise is part of the Graduation Pledge Alliance, a global community effort to remind an employee that their jobs can be more than their paychecks and that living green is a moral act. In 2011, the pledge’s first year, 135 students signed in agreement.

“I pledge to explore and take into account the social and environmental consequences of any job I consider and will try to improve these aspects of any organizations for which I work,” the pledge reads.

Taking the pledge comes as a natural progression for many of the students from their time at the San Francisco Bay Area Jesuit school. Lindsey Kalkbrenner, director of the school’s Center for Sustainability, said that SCU has a Career Center whose mission is to “transform education into application for the common good.”

“The world is the stage for our students’ learning about social and environmental injustices throughout internships, immersion trips, international fellowships and other experiential learning,” she told NCR.

In the past three years, 60 students have completed a “Careers for the Common Good” course, where they participate in a weekly community-based learning” placement, listen to guest speakers and visit Silicon Valley companies to explore for social and environmental benefits. Another 30 have participated in a Boot Camps program to help them prepare for work in a specific field, such as the electric car industry.

Since 2004, Santa Clara has placed sustainability at center stage for the Bay Area school. That year, administrators formally adopted a sustainability policy, which committed it to improving environmental stewardship, education and outreach throughout the campus. In 2007, its president at the time, Jesuit Fr. Paul Locatelli, signed the American College and University Presidents’ Climate Commitment. The pledge holds schools to work toward climate neutrality and to integrate sustainability into its teaching and research, outreach and stewardship.

The school projects it will become climate neutral -- producing net-zero greenhouse gas emissions -- by the end of 2015.

With these actions, fostering earth-mindfulness -- or as the late eco-theologian Passionist Fr. Thomas Berry would say, becoming a “benign presence in the natural world,” instead of a “disruptive force” -- has become commonplace in more than 770 courses at the 9,000-student university. Wherever possible, faculty are also encouraged to add ecological teachable moments to their classes by scheduling guest speakers and organizing field trips to local sites and businesses in Silicon Valley putting sustainability into practice.

In August, the Princeton Review named Santa Clara one of 24 colleges on its 2015 Green Rating Honor Roll, a title given to schools receiving the highest score on its sustainable and environmental practices. Santa Clara has ranked 19th in the publication’s 2014 and 2015 lists of the top-50 green colleges.

If there is a better way to save water, build an energy efficient house, or keep garbage out of landfills, “there is nothing we won’t try,” Kalkbrenner said.

A graduate of Santa Clara with degrees in biology and business administration, Kalkbrenner began in 2006 as the school’s first sustainability coordinator. “I had to learn on the job,” she said, as there was no precedent for the kind of work she was to do.
By 2012, Kalkbrenner had two staff members and seven undergraduate interns. Her team currently reaches out to every campus entity: from academics, athletics and recreation, to curriculum development, residence life and student involvement.

With California approaching its fourth year of drought, water conservation remains an ongoing concern on campus.

Santa Clara began addressing the situation in 2003 when it first started recycling water. Since then, it has avoided the use of 487.5 million gallons of freshwater due to numerous conservation measures: among them, low-flow toilets, waterless urinals, sink faucet aerators and low-flow showerheads.

In response to the drought, the Center for Sustainability and the student government launched in April a “60 Seconds Less” campaign encouraging students to reduce their shower time by one minute.

In addition, the university has turned off four of its six decorative fountains. The remaining two will continue working but will be converted to recycled water. Sprinklers now run during the night to cut back on water evaporation, and drought-resistant plants are replacing their thirstier counterparts.

Kalkbrenner’s work sometimes takes her to unusual campus sites. Earlier this year, a group of faculty, staff and student volunteers joined her in donning lab coats, gloves and special glasses on a visit to the campus recycling center to find out what was happening in the world of garbage.

Their visit was part of a quarterly “waste characterization” session, sponsored by the center to bring home the reality of what goes into the waste stream and how to reduce it through more conscious recycling or composting. In 2013, the campus diverted 58 percent of its garbage from municipal landfills.

The Center for Sustainability has its lighthearted moments, too, but like everything else connected with acting as a “benign presence” on the earth, the moments come with a serious message.

Each January, it sponsors an eco-fashion and recycled art show. The event showcases the talents of SCU students, faculty, staff and alumni. People are invited to design their own fashions from recyclable materials that would usually end up in landfills.

Now a popular spring semester tradition, the show started in 2011 when a student wanted to contrast eco-fashion, which seeks to respect people and the environment, with high-end fashion, which can often lead to exploitation of garment factory workers and pollute water systems with harmful dyes.

At this year’s show, students transformed blue yarn and bottle caps into earrings, conference brochures and a red and white tablecloth into two long skirts, and an old plastic daisy chain into a nifty necklace.

These efforts and others at Santa Clara would likely leave Passionist Fr. Thomas Berry beaming if he were alive today. In them, he would see there is no limit to what can be accomplished in an academic setting when ecology, as Berry said, “becomes the foundation of all courses, all programs, and all professions.”