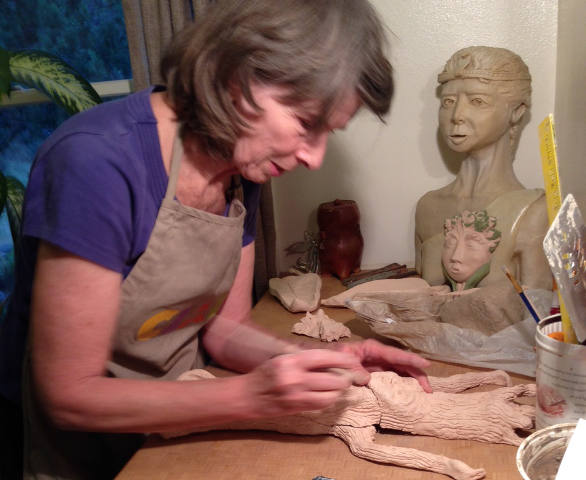 Bengali poet Rabindranath Tagore (1861-1941) saw trees as examples of living prayers. “Silence my soul these trees are prayers. I asked the Tree: Tell me about God -- then it blossomed,” wrote the winner of the 1913 Nobel Prize in Literature.

The living prayer Tagore described presented itself this spring to Mariam Weidner, a sculptor in Silver City, N.M., in the form of her front yard juniper tree.

While sitting outside her home, “listening to the sounds of nature all around” as she described, Weidner noticed a stunning visual in the tree. Her eyes picked up on two small branches that resembled hands in a praying position.

“I had seen this tree many times before and had never noticed those hands,” she said.  “I wondered if the tree had just started to pray, or if those prayerful hands were always there and I wasn’t awake enough to notice them.”

Once spotted, the sculptor inside Weidner immediately realized great potential for her next clay project.

Weidner, who grew up in northern Kentucky and was raised Catholic, has always had a fascination for clay. In recent years, the fascination has transformed into a passion after she took classes to learn the basics for producing a sculpture. Working with clay, she told NCR, “feels like a soul call, a form of prayer -- co-creating with Spirit.”

The experience is akin to the one she has as a leader of Dances of Universal Peace, a form of circle dance movement that combines prayer phrases from world spiritualities with chanting and music.

“Chanting those sacred phrases opens your heart and deepens your connection to the Divine, and for me working in clay is similar.  Instead of chanting, I’m sculpting a representation of the Divine Feminine or Nature and it strengthens my connection to Source,” she said.

“I was so excited, when I heard it was coming,” Weidner said in an email. “It’s a blessing to have a major spiritual leader try to wake up those in denial about the ecological impact of our global culture cultures and technology on Mother Earth.”

On June 18, the day Laudato Si’ released, Weidner’s sister, a parish religious education director, sent her the prayer that appears at its end, “A Christian prayer in union with creation.”

Immediately captivated by its beauty and universal tone, Weidner downloaded the entire encyclical. She found her love of Francis’s second prayer, the “Prayer for the Earth,” equal to the first, particularly the lines about being “filled with awe and contemplation,” and the acknowledgement that “we are profoundly united with every creature as we journey towards [God’s] infinite light.”

Indeed, while working on the Praying Tree sculpture, Weidner said she felt united with every creature. The 18-inch wall piece took her about a week and a half to sculpt, completing it on the summer solstice. As Weidner added the final touches to her work, she had a powerful experience.

“I heard a little voice telling me, ‘Yes, pray for the Earth and the Earth is praying for you/us,’” she said.

Weidner said she believed the planet prays for its inhabitants: “Earth, especially in the form of trees, rocks and plants does pray for our survival. I see this demonstrated by the abundance of medical plants which cover the Earth.”

To celebrate the sculpture’s completion, Weidner held a private ritual in her yard not far from the praying tree that sparked the project. Her dog joined the small affair, as did the birds, trees, rocks and animals near her home, which borders the Gila National Forest. In her ritual Weidner honored the four elements -- earth, wind, fire and water -- and called upon the Creator as Divine Feminine, sang some chants and offered prayers, including Francis’ "Prayer for the Earth."

Like many, Weidner is elated that Francis has declared Sept. 1 as an annual World Day of Prayer for Creation Care.

“It sounds like something that will help raise awareness of what I took as the Pope’s main message in his encyclical -- that we are nature and nature is us, that we are all one, and that there is no separation,” she said.

Unfortunately, the Praying Tree sculpture did not emerge intact from its kiln firing. While disappointed, Weidner is also philosophical: “The gift of that first sculpture for me was the insight that came while I was working on it.”

As soon as she finishes a commissioned piece, she will create another Praying Tree. No matter how version two turns out, though, Weidner knows as with all clay sculptors the process is more healing than the final product.

“Sometimes I get cranky when I can’t get my hands on some clay right away. It doesn’t even matter what happens to the piece in the end, like the tree blowing up. It’s more the prayerful process of sculpting that nourishes me,” she said.