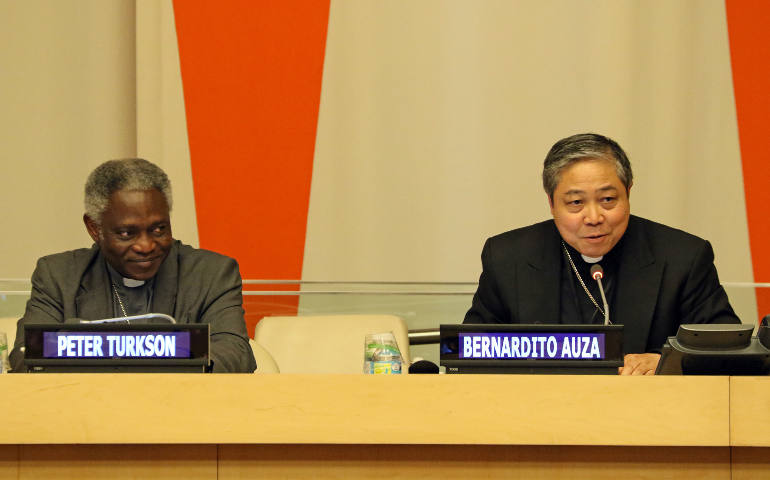 Ghanaian Cardinal Peter Turkson, president of the Pontifical Council for Justice and Peace, and Archbishop Bernardito Auza, Vatican nuncio to the United Nations, are seen during a presentation on Pope Francis' encyclical on the environment June 30 at U.N. headquarters in New York City. (CNS photo/Gregory A. Shemitz)

Two conferences held at the Vatican this week have sought to further unpack Pope Francis’ environmental encyclical, “Laudato Si’, on Care for Our Common Home,” from the context of climate change and the frame of farming.

On Wednesday, a panel of a leading United Nations climate official, a development head and “a secular Jewish feminist” all spoke ahead of a two-day conference focusing on climate change, titled “People and Planet First: The Imperative to Change Course.” The meeting, running Thursday and Friday, was organized by the Pontifical Council for Justice and Peace and CISDE, an alliance of Catholic development agencies.

Naomi Klein, a Canadian activist and author of This Changes Everything: Capitalism vs. the Climate, described Laudato Si’ as a poetic, courageous document that speaks beyond the Catholic world to “every person living on this planet.”

“And I can say that as a secular Jewish feminist who was rather surprised to be invited to the Vatican, it certainly spoke to me,” she said.

She told journalists the invitation represented “a particularly courageous decision” given the attacks launched by some Republicans in the U.S. against environmentalists.

“It indicates that the Holy See is not being intimidated and knows that when you say powerful truths, you make some powerful enemies,” she said.

Also at the press conference was Ottmar Edenhofer, a German economist and co-chair of the U.N. Intergovernmental Panel on Climate Change, who said the encyclical “asks for a fundamental departure from the business-as-usual scenario.”

“From this perspective, the encyclical is quite clear that the denial of climate change is no longer a quest of scientific truth but it is an effort to protect private interests against those of the common good,” he said.

Klein pointed to an aspect of Laudato Si’ she saw as its “most courageous truth … that our current economic system is both fueling the climate crisis and actively preventing us from taking necessary actions to avert it.”

A growing understanding of the need to address simultaneously climate and economic issues has led to a new type of climate movement, she said. From that has emerged “some surprising and even unlikely alliances,” with trade unions, indigenous peoples, and faith and green groups all coming together, even if it means getting “out of their comfort zones.”

“Inside these coalitions, we do not agree on everything. … But we understand that the stakes are so high, time is so short and the task is so large that we cannot afford to allow those differences to divide us,” Klein said.

Reading from a statement prepared by Cardinal Peter Turkson, his undersecretary at the Justice and Peace council Flaminia Giovanelli stressed the conference’s title as a signal to its purpose.

“People and planet, not one or the other, not one at the expense of the other,” she said.

Giovanelli repeated a major theme from the encyclical -- the climate is a common good -- and another often emphasized by church officials in recent months, that the costs of climate largely fall upon the poor. She said that the United Nations’ December climate negotiations in Paris “will be crucial in identifying strong solutions to the problem of climate change,” in addition to the international body’s possible approval of new sustainable development goals.

“These goals, similar to important points made in Laudato Si’, await the pledges and the will of the whole world community … Yet the single biggest obstacle to the imperative to change course is not economic, scientific or even technological, but rather within our minds and hearts,” she said.

“The political dimension needs to re-establish democratic control over the economy and finance, that is, over the basic choices made by human societies. This is the path the entire human family is on, the one which leads through New York to Paris and beyond,” Giovanelli said.

Since the encyclical’s June 18 release, Turkson has served as a point man in disseminating its message. On Tuesday, he appeared before the United Nations Children’s Fund in New York, saying the encyclical contains a simple elegant, even child-like quality in its style. He said there are similarities between its important points and those raised in the book All I Ever Needed to Know I Learned in Kindergarten.

“Their sage advice is that we should recover the lessons we all learn as children, lessons like ‘Share. Be kind. Clean up after yourself. All things in moderation. Make time for wonder,’” he said.

Over the weekend, Turkson addressed the encyclical from a farmer’s perspective during an international symposium held in Milan on the topic of “Faith, Agriculture, Food and the Environment.” The event, part of the six-month-long Expo Milan focusing on a sustainable food future, was organized in part by the Justice and Peace council, the U.S.-based Catholic Rural Life and the International Catholic Rural Association.

He noted that “farming is a constant backdrop in the Bible,” with Jesus using the language of agriculture in many parables and teachings. The lesson from the Good Samaritan story, he said, was that creation is a gift for all humanity, and in the case of those who are hungry, “that our common humanity is built on love and active compassion -- not on commercial exchange and the individual’s ability to pay!”

Repeating an oft-cited phrase from Laudato Si’, he said today people “have not done a very good job of tilling and keeping the earth.” That includes caring for the hungry; the cardinal cited statistics that show as many as 850 million people each day suffer from acute hunger, even as a third of all produced food worldwide is wasted.

“This number is already shocking in itself, but what must shock us even more is the fact that behind those numbers are real people, with their fundamental dignity and rights,” he said, quoting Archbishop Bernardito Auza, the Holy See permanent U.N. observer, from a 2014 address.

“Humanity has been a poor steward of the environment … And this environmental degradation has a direct impact on agriculture -- through droughts and floods caused by climate change, depletion of freshwater resource, and loss of vital biodiversity,” Turkson said.

The cardinal said that the current agricultural model “leaves us unconsciously dependent for our food on systems we cannot see and do not understand.” He again quoted Francis in Laudato Si’, saying “We are part of nature, included in it and thus in constant interaction with it.” Because humans are integrated and sustained by nature, they likewise have a reciprocal response to sustain and nourish the earth, the cardinal said.

“Agriculture is the practice of this reciprocity,” Turkson said.

[Brian Roewe is an NCR staff writer. His email address is broewe@ncronline.org. Follow him on Twitter: @BrianRoewe. Religion News Service contributed to this report.]