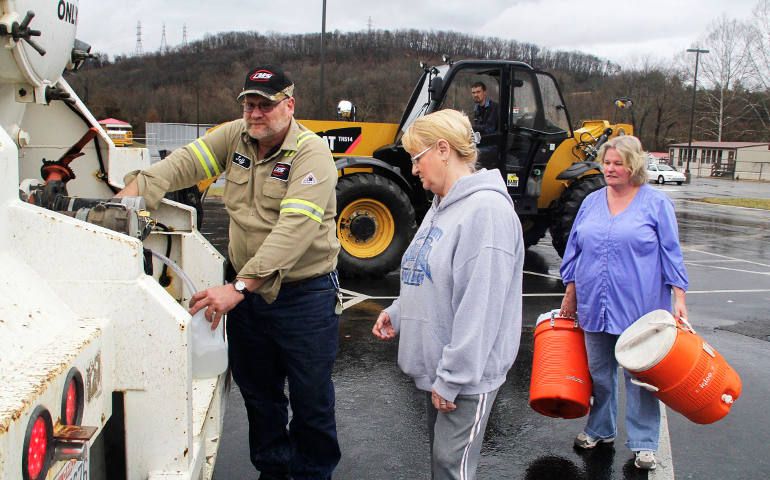 Residents fill up containers with water at an emergency distribution center in Poca, W.Va., Jan.11, after a chemical spill led to a ban on tap water for residents in nine counties. (CNS photo/Lisa Hechesky, Reuters)

Last week's chemical leak into West Virginia's Elk River, near the capital Charleston, is "nothing less than a calamity," according to a Glenmary missionary priest.

"Basically I am heartened that no one has died from this tragedy," said Glenmary Fr. John Rausch, an environmental activist for more than 35 years who recently retired as coordinator for the Catholic Committee on Appalachia.

On Thursday as much as 5,000 gallons of a chemical called 4-methylclohexane methanol, or MCHM, leaked into the nearby Elk River from a 48,000-gallon storage tank operated by Freedom Industries, a company that produces specialty chemicals for the mining, steel and cement industries. Just north of Charleston, the state's most populous city, the river flows into the Kanahwa River, which feeds the Kanawha Valley water system -- the largest in the state, with more than 100 storage tanks and 1,700 miles of pipeline.

As of Tuesday morning, the ban has lifted for about 35,000 people; West Virginia American Water stated in a press release it is lifting the ban "in a strict, methodical manner to help ensure the water system is not overwhelmed by excessive demand."

In an interview with NCR, Rausch warned that "any time we disregard safety for the sake of profits, which happens over and over again in mining disasters, we are setting into motion the forces that ultimately lead to tragedy."

He criticized Freedom Industries and the West Virginia Environmental Protection Agency for not acting quickly enough to contain the spill. The tank that ruptured had not been inspected in years, a result of state law that omits storage facilities from routine inspections.

"This suggests to me a lax corporate culture in regards to safety, much like how many coal mines operate in the mountains," Rausch said. "'People before profits' is not just a bumper sticker --it's a moral imperative."

While the spill has grabbed national headlines, Rausch said the issue of non-potable water is an ongoing situation in West Virginia and other coal communities.

"In mountain communities, wells and sources of clean water are polluted regularly by callous mining practices," he said.

The Glenmary priest cited cases in Kentucky where a mother unknowingly bathed her three-year-old daughter in water laced with excessive arsenic, and another girl lost some of her hair because of acid mine drainage in the creek near her home. To cope with such risks, he said people, often of modest means, have to buy bottled water when wells that served them -- sometimes for generations -- become polluted.

"The tragedy in Charleston just magnified what happens frequently throughout the coalfields," Rausch said.

Residents reported the chemical that spilled emitted a black licorice odor. Much remains unknown about MCHM's ecological and health impacts (it can cause vomiting, eye or skin irritation, and breathing complications). The chemical is a foaming agent used to scrub coal of the rock and clay attached to it when it's pulled from the ground.

"If it's not separated from the coal, when it all burns together, it produces more ash than necessary," explained Jeanie Kirkhope, Rausch's successor at the Catholic Committee of Appalachia, and director of a Catholic Worker house in Spencer, W. Va.

Kirkhope said that coal companies have tried to justify the use of such chemicals in a number of ways, saying the amounts used are not enough to cause harm, don't cause cancer, and are soluble and even organic in some cases.

She said that the Catholic Committee of Appalachia is working with other activist agencies like the Ohio Valley Environmental Coalition, Christians for the Mountains and the Sierra Club to raise public awareness and educate on these issues. That includes a prayer service vigil planned for later in the week to heal the contaminated water, wildlife and ecosystem affected by the spill.

"We'll continue pointing out that all citizens benefit from electricity from coal, therefore each of us is personally responsible," Kirkhope said. "We need to examine and reduce our use of electricity and hold companies accountable, while pressuring for renewal energy sources."

For now, the focus remains on bringing clean water to people still in need, particularly those in the southern parts of the state. A coalition group called Citizen Action for Real Enforcement has asked for bottled water donations, as well as storage containers, microwavable food, paper products and utensils and pre-made baby formulas.

In addition, it has invited people living outside the affected areas to come forward with donations to help those in food and other service industries who were out of work over the weekend.

"When the water comes back on, those families will still have to cope with loss of income and the need to pay rent," Kirkhope said.

The coalition -- comprised of 18 groups including the Center for Biological Diversity, Earthjustice, Keeper of the Mountains Foundation, the League of Women Voters of West Virginia, and the National Wildlife Federation -- has also begun a MoveOn.org petition demanding that the Office of Surface Mining Reclamation and Enforcement "terminate West Virginia's mining enforcement program and implement a program that is accountable to the people of West Virginia."