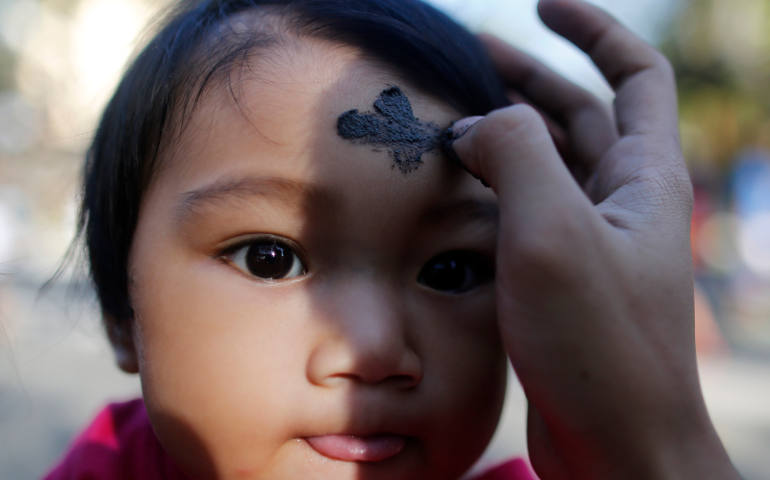 A seminarian marks a cross on the forehead of a child during Ash Wednesday Mass at a church in Manila, Philippines. (CNS photo/Francis R. Malasig, EPA)

What’s ecological about Lent? Ecological, to me, is the great hope that culture is permanent and that nature will evolve and endure.

Sometimes we call this hope permaculture -- and call ourselves perma-culturists. We imagine a whole even though everything feels partial. We imagine interconnections even though we feel apart or set apart or disconnected. Isn’t it funny that people used to call a new hairdo for a woman a “permanent”?

On Ash Wednesday some of us marked our heads with dirt, acknowledging what we know about death. We know it is coming. Some of us even know that a lot has already died.

On Ash Wednesday we rehearsed our own return to the earth by splotching our foreheads with ash. That is ecological because it tries to rehearse the closing of the circle and the lifecycle. The ritual feels so ancient that it could be prophetic. We embrace the lifecycle. We embrace our own death.

Many of us are agonizing about the water in Flint, especially because we see the environmental racism in it. Why do some people act as canaries while others lives are secured above the mine?

We are also agonizing because we know about the lead in a lot of pipes. When death comes near to home, we tend to care more. We know how to fear for ourselves, but less about how to fear for others. We say we are all interconnected, and yet it often takes lead in our own pipes to make us care about lead in somebody else’s pipes.

Ash Wednesday helps us recognize how limited we are. And we are very limited, saying one thing and meaning another, hoping for one thing and living another way. We may be perma-culturists and understand nature as culture and culture as nature and ashes as ends and ashes as beginnings, but we don’t understand at the underground or soul level. We don’t get our own death at the pipe level, at that level below the one you can see and on which you radically depend.

There is a feast in living real. There is a powerful connection in being concerned about our pipes: our windpipes, our water pipes, our lead pipes.

Death goes in and out of fashion. The topic lingers behind euphemisms for a few years, and then someone calls it forth again: Elisabeth Kübler-Ross with her disciplined On Death and Dying in 1969; Susan Sontag with her angry but profound Illness as Metaphor in 1978 and the empathetic follow-up AIDS and Its Metaphors in 1989; Derek Humphry, implausibly, with his suicide handbook Final Exit in 1991; Sherwin Nuland with his magisterial How We Die in 1993; more recently, Joan Didion with her agonizingly precise The Year of Magical Thinking in 2005; and Atul Gawande with his humane Being Mortal in 2014. Each of these books argues, one way or another, for a continuum between life and its conclusion.

In recent weeks I’ve seen at least five new books published about death: one by a historian; two by hospice workers; one by a widow; one by a man who is dying himself. Several of them quote Dylan Thomas’s “Do Not Go Gentle Into That Good Night” to advocate resilience, and then map the fine line between denial and succumbing.

I also wrote a book about death last year, Approaching the End of Life: A Practical and Spiritual Guide. I thought I was writing it for all the people in my Greenwich Village parish who had removed themselves from folk culture and kept walking in my office asking for me to “do something” like a funeral or memorial for their neighbor, mother, friend, wife. In the end, it turned out I wrote it to myself. It became a very personal handshake with my own end.

By now you have washed whatever ashes you put on your forehead off with soap and water. The water was probably clear and clean. The slightest appreciation of that water will go far in making you a part of something permanent. Nature and culture are permanent and perma. You and I are not.

Ecological means finding the freedom in what passes and what sustains. It is about leaning toward the whole and refuses to be a part of the parts. It means seeing what we already know and marking our knowledge with a splash of ash.