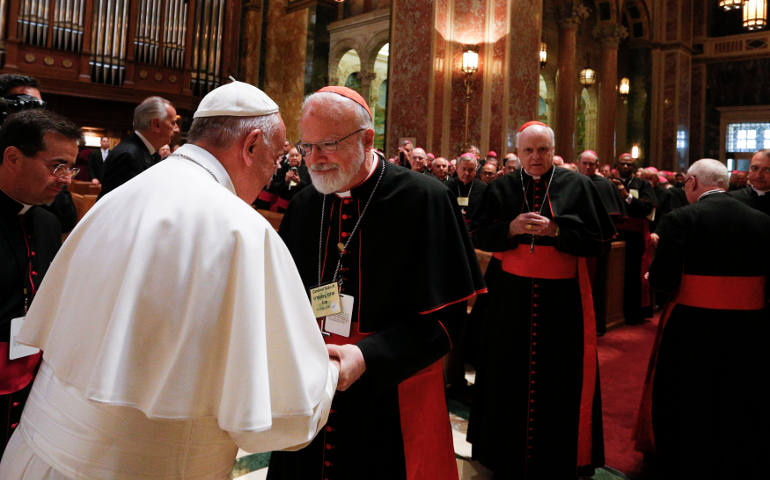 Cardinal Sean P. O'Malley of Boston meets with Pope Francis during a meeting with U.S. bishops at the Cathedral of St. Matthew the Apostle in Washington Sept. 23. O'Malley recently signed the Catholic Climate Petition, an effort endorsed by Francis that seeks world leaders to take steps to address climate change. (CNS photo/Paul Haring)

A pope-endorsed petition seeking Catholic support for substantial action on climate change in Paris in 10 days has netted its most prominent signer from the U.S. church hierarchy.

The Global Catholic Climate Movement announced Friday that Boston Cardinal Sean O’Malley has become the latest prelate to sign their Catholic Climate Petition, joining 20 individual bishops, more than 200 Catholic organizations and more than 600,000 people from around the world.

The list of supporters includes Pope Francis, who in May endorsed the petition, though a papal representative signed on his behalf due to protocol preventing popes from individually signing such documents.

The petition seeks for global leaders attending the United Nations climate change conference, or COP 21, to reach agreement on a deal to collectively address climate change. The conference opens Nov. 30 and runs through Dec. 11. A deal is expected to bind each country to pledges to reduce global greenhouse gas emissions, and for developed countries to provide financing and assistance to underdeveloped countries in transitioning to clean energy technology and adopting mechanisms to both mitigate and adapt to a changing climate.

“Climate change affects everyone, but especially the poor and most vulnerable people among us. Inspired by Pope Francis and the Laudato Si' encyclical, we call on you to drastically cut carbon emissions to keep the global temperature rise below the dangerous 1.5°C threshold, and to aid the world’s poorest in coping with climate change impacts.”

O’Malley is the second U.S. bishop to sign the petition, and the first active head of a diocese. Cardinal Theodore McCarrick, archbishop emeritus of Washington, D.C., has also signed the plea.

Christina Leano, global campaigns coordinator for the Global Catholic Climate Movement, called O’Malley’s support “a great accomplishment” for the coalition, and said it represents an invitation for Catholics in Boston and the U.S. to follow suit.

“It’s a huge step for the U.S. Catholic church in their support of climate action,” she told NCR.

The petition officially launched in March with a goal of gathering 1 million signatures that would then be delivered to U.N. representatives and members of the French government before the Paris climate summit officially opened.

So far, the petition’s biggest backing has come from the Philippines -- where bishops, including Cardinal Luis Tagle of Manila, launched a signature campaign -- and the United Kingdom, said Leano.

Despite strong international support, including in Brazil, Mexico and Australia, the U.S. has lagged behind, with roughly 15,000 signatures so far. Leano, who is based in Boston, said it’s been “a slow process” getting the U.S. hierarchy on board.

“We’ve done a lot of outreach trying to get the U.S. bishops on board, and unfortunately, we haven’t been as successful as we had hoped, especially given the role that the U.S. plays in carbon pollution,” she said.

While individual bishops have at times addressed the need for action on climate change ahead of the Paris talks, primarily through the U.S. bishops’ conference, those efforts have yet to translate into support for the petition. Notable international bishop signers include Tagle, Cardinal Peter Turkson, Cardinal Oswald Gracias of Bombay, India, and Cardinal Cláudio Hummes, archbishop emeritus of Sao Paulo, Brazil.

At the same time, the Catholic climate movement has had strong support from other corners of the American church, Leano said. Among its 250-plus partners are more than three dozen religious congregations (mainly orders of women religious) as well as the Conference of Major Superiors of Men and the Leadership Conference on Women Religious. Social justice offices for the Hartford, Conn., archdiocese and the Orange, Calif., diocese are also members.

“We have a strong support from U.S. religious congregations and U.S. laity, so we trust that in time it’ll trickle up, as it often does in the church,” Leano said.

Soliciting more signatures has been a focal point of the Global Catholic Climate Movement’s “Month of Climate Action,” which seeks to brew momentum ahead of the Paris talks. The month has seen support triple, with the petition having 200,000 signatures at the beginning of November.

Other aspects of the month-long campaign include an online prayer chain using the hashtag #Pray4COP21 and participation in various rallies and marches across the world set for Nov. 29. A march on that day in Paris anticipated as many as half a million people assembling to put pressure on negotiators to reach a binding agreement, but French officials on Thursday called off the event, as well as a conference-closing march on Dec. 12, due to the recent terror attacks in the capital city.

While restrictions on public events have ratcheted up, the Global Catholic Climate Movement still plans to present its petition and signatures to French officials and U.N. climate chief Christiana Figueres on Nov. 28. Cardinal Hummes will be among those presenting the signatures.

With the major public events in Paris cancelled, Leano said the marches and events in other parts of the world gain increased significance.

Leano said the movement hopes for a strong push in the final days before they present the signatures to U.N. officials. How many the final number, the message remains the same, she said: