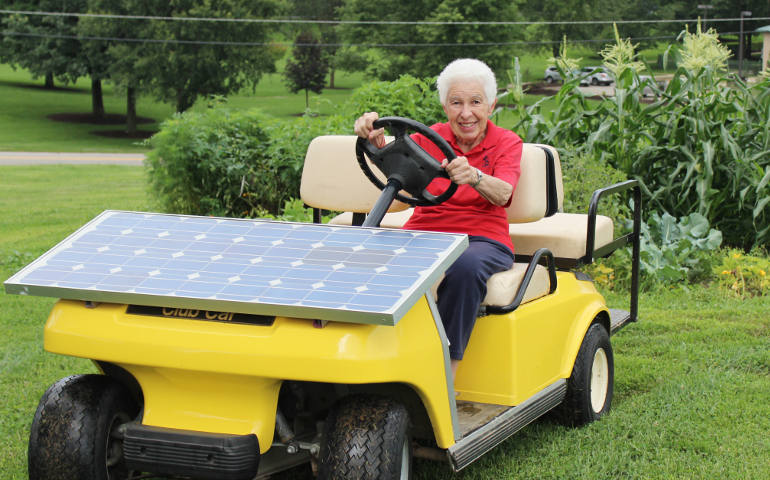 Environmentalists are mourning the death of Charity Sr. Paula Gonzalez, a Cincinnati nun who spent the last 45 years of her life advocating for renewable energy. Gonzalez, 83, died July 31 at the Charity Sisters’ Ohio motherhouse.

Born on Oct. 25 1932, in Albuquerque, N.M., Gonzalez entered the Sisters of Charity of Cincinnati in 1954. She later earned a Ph.D. in cellular physiology from the Catholic University of America and taught biology at Mount St. Joseph University, in Cincinnati, from 1965-1980 before becoming involved full time in environmental ministry.

That included participating in the United Nations Earth Summit in 1992 in Rio de Janeiro – which produced a global blueprint for sustainable development and formed the U.N. Framework Convention on Climate Change -- and its 10-year follow-up in Johannesburg, South Africa.

According to the U.K.-based Catholic Herald, Gonzalez called the Rio conference that gathered nearly 20,000 people “a watershed moment in history,” saying “This many people coming together to choose the future: This is the beginning of the ecological era.”

Widely known as “the solar nun,” it is probably no surprise that “Paula died on a SUN-day,” reflected Canadian Charity Sr. Maureen Wild, spokesperson for Sisters of Earth, an organization of religious and lay women dedicated to healing the planet. In 1996, members of the brand new organization visited Gonzalez's “La Casa del Sol” (“The House of the Sun”) green home during their summer meeting in Grailville, Ohio.

La Casa del Sol was Gonzalez's first major foray into the realm of renewable energy. The 1,500 square-foot passive-solar, super-insulated home cost less than $10 per square foot to build, she told Mother Earth News Magazine in the May-June 1986 issue. Beginning in 1982, every Saturday for three years a group of 30-plus volunteers worked to renovate an old chicken barn into the new structure using used recycled materials, including metal salvage. Gonzalez financed the project through garage sales that collected close to $13,000.

Her experiment was a success. When the weather plummeted to zero in February 1985, La Casa del Sol remained at 50 degrees. She revved up the heat a bit by feeding the wood stove with a few leftover construction scraps. Gonzalez and La Case del Sol were featured in the PBS series Earthkeepers in 1993.

In 1991, using the same garage sale financing formula, she turned an old four-car garage into EarthConnection, a 21st century solar-heated energy efficient building. Now a ministry of the Sisters of Charity of Cincinnati, EarthConnection serves as an educational center offering programs in sustainable agriculture, alternative energies, eco justice and eco-spirituality.

Gonzalez told NCR in a 2011 interview that she traced part of her passion for ecology to the first Earth Day in 1970 when she was inspired by the outpouring of enthusiasm across the United States. A few years later when controversy erupted over a new proposed nuclear power plant, she realized that protesting by itself cannot solve energy problems. Creating life-sustaining alternatives needed to be a part of the plan, too.

But the original roots of her passion were lovingly cultivated through childhood experiences. Growing up in Albuquerque, she spent hours of contentment helping her father Hilario in his vegetable garden.

At an early age her soul was touched by the God she referred to as “The Great Living One” – a Divinity she grew to recognize as being present throughout all of creation. Topics from some of her talks and writings reflected this: “Living in a Eucharistic Universe,” “Called to Tend the Sacred” and “The Our Father: Our Environmental Prayer.”

Gonzalez shared her Lord’s Prayer meditation in an October 2007 piece for St. Anthony Messenger. Using Sufi author Dr. Neil Douglas-Klotz's Aramaic translation, she wrote that in “Our Father, Who Art in Heaven,” Father actually meant birther of the cosmos and that heaven would actually be the universe.

“When we proclaim God's name as ‘hallowed’ (holy), do we recognize the echo of God's name in the wonder all around us? Might God be calling us to be co-creators of a transformed Earth, a heaven of peace and harmony?” she wrote.

Gonzalez was adept at combining the practical with the mystical in the more than 1,800 talks, lectures and retreats that she presented across the world. In the MotherEarth article, she explained that she often invited individuals to consider “what might happen if, instead of fighting (all the way up to nuclear war) to extend the 'good old days' of the petroleum era, we began to tap our boundless creativity and imagination to design the 'better new days’?”

Two years later, while attending a solar conference in Cleveland, she and engineer Keith Mills were inspired to address the issue of global warming and agreed to co-found the Ohio affiliate of the Regeneration Project, a ministry sponsored by Interfaith Power and Light. In 2014, the Cincinnati Inquirer honored Gonzalez as one of its “Women of the Year.”

The publication in June 2015 of Pope Francis’ environmental encyclical “Laudato Si’, on Care for Our Common Home” thrilled Gonzalez, who told NCR she was excited he included “a lot of background stuff,” predicting that “he's going to grab the attention of the global community for sure.”

‘A force of nature’

News of Gonzalez's death prompted reactions of sadness and love, from a few of the individuals she has influenced in her ministry.

One of them is environmental songwriter, Joyce Rouse, aka Earth Mama, who first met Gonzalez in the early 1990s. The Charity sister left her mark on a few of Earth Mama’s songs, among them: "We All Breath the Same Air," "The Perfect House" and "Follow the Sun."

“She became an enthusiastic supporter of my making music for Earth Literacy,” Rouse said. “Every conversation with her was an opportunity to soak up a deeper understanding of the universal connectedness of all things.”

Brian Swimme, a professor of evolutionary cosmology at the California Institute of Integral Studies and the co-author of The Universe Story with Passionist Fr. Thomas Berry, considered Gonzalez as being “sent from the future to show us how to live with intelligence and wisdom.

“The fire in her! Paula was 20 years older than me and when I first met her I thought to myself, 'I hope I have her energy at her age,’… Prophet, inventor, scientist gadfly, leader, Sr. Paula was first and foremost an inspiration for us trying to live an ecological life,” Swimme said.

Mary Evelyn Tucker, director of the Yale Forum on Religion and Ecology, said she will remember her friend as “a force of nature that lives on in our midst. She lived in a world of energy of her own creation while drawing on the power of the universe.”

Sara Ward, director of Ohio Interfaith Power and Light, lauded Gonzalez for “helping us understand how weatherization for the poor was also helping to reduce our use of fossil fuels which were polluting our air.”

Ward saw the sister in June when the IPL board met at EarthConnection for its annual retreat. “Even in her limited physical capacity Paula mustered the strength to join us each day for a few hours, lifting us all with her presence, and yes, her still strong voice for caring for God's amazing creation,” she said.

Ward witnessed the nun's green burial and rite of committal on Aug. 2 at the Cincinnati motherhouse cemetery, describing it as “sweet and simple.”

“The sun was shining, there were puffs of clouds, dragonflies, butterflies, birds and all manner of God's creation came together to honor her. As she was presented for burial in her white shroud we gathered and said prayers and petitions as a community, sprinkled her with water and laid flowers all around her,” Ward recounted.

Ward added she was both full of sorrow and joy all at once “as I could just sense her delight as we gathered around her. So peaceful, beautiful and full of grace.”

The group said their final goodbye to the five-foot-tall ecological giant with this prayer:

“Into the beauty of mother earth, we release you. Into the freedom of wind and sunshine, into the dance of the stars and planets. We release you into the next part of our spiritual journey as you walk hand in hand with your creator God.  We release you to go safely, go dancing, go joyfully home.”