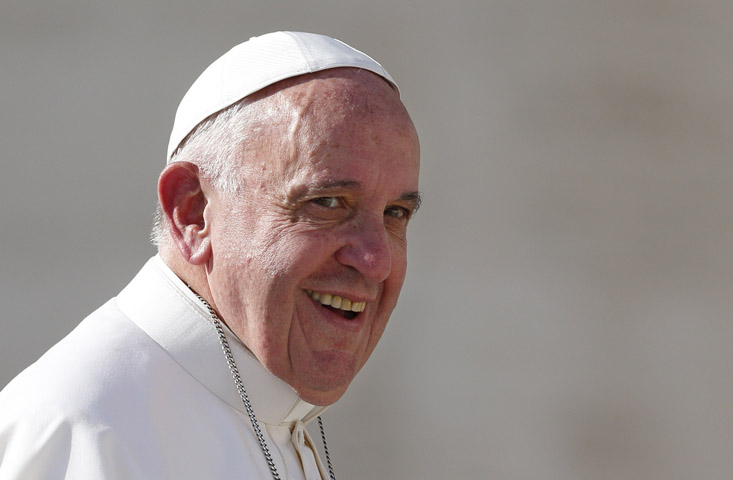 Pope Francis smiles as he leaves his general audience in St. Peter's Square at the Vatican Nov. 4. (CNS/Paul Haring)

Two surveys released this week each offered glimpses of the fabled “Francis effect,” in this case on the issue of climate change. The results suggest Pope Francis, his environmental encyclical in tow, to some degree has nudged Americans toward greater acceptance of global warming as a reality and one warranting their concern.

One in three U.S. Catholics and one in six Americans acknowledged a papal influence on their views of global warming, according to a survey conducted by the Yale Program on Climate Change Communication and the George Mason University Center for Climate Change Communication. Of those reporting an influence, half of both Catholics and Americans said they grew more concerned; only 8 percent of each segment said they became less concerned as a result of Francis’ message.

At the same time, two-thirds of Americans, half of Catholics and roughly three-fourths of both Evangelicals and Protestants said Francis has had no impact on their global warming views. Just four percent of Catholics and one in 20 Americans said their views on the topic changed in the past year.

The report, released Thursday, compared results from separate surveys of the same 900 respondents first polled in the spring (Feb. 27-March 10) before the June publication of “Laudato Si’, on Care of Our Common Home,” and again in the fall (Sept. 30-Oct. 19) following Francis’ U.S. visit. Researchers concluded over that timeframe Americans became “modestly more engaged” and concerned about climate change, with the pope and his teachings on the subject a contributing factor.

After the encyclical and papal trip, Americans and Catholics who were polled expressed greater awareness that global warming is occurring: among Americans, up 4 percentage points to 66 percent; among Catholics, a 10-point jump to 74 percent. Concern also rose, with each group polling in the fall at around 60 percent, increases of 8 percentage points among Americans and 11 points among Catholics. The survey also found more Americans and Catholics hearing about global warming weekly in the media and talking about it, though at best represented 1 in 3 people.

Some of the greatest gains, though, were seen on awareness of the encyclical itself. Nationally, it rose from 5 points pre-release to 19 percent afterward; among Catholics, awareness jumped 16 points to 24 percent. Roughly 1 in 10 Americans and 2 in 10 Catholics heard Francis’ views on global warming discussed during religious services; for Catholics who attended services, 26 percent indicated at least “a little” such discussion taking place.

Those findings largely mesh with results from the National Surveys on Energy and Environment, which on Monday reported on data regarding Francis’ potential influence mined from its biannual survey on American beliefs on climate change.

The poll, conducted in September by the University of Michigan and Muhlenberg College, reported that 60 percent of Americans said they supported Francis’ call to action to address climate change, compared to 21 percent opposed. Among three religious segments, Catholics led in papal climate support (69 percent), followed by non-evangelical Protestants (66 percent); more evangelical Christians backed the pope on climate action (46 percent) than opposed him (33 percent).

In addition, each of those segments showed opinions of Francis improving more than worsening due to his climate stand: Catholics, 36 percent improve vs. 5 percent worsen; non-evangelical Christians, 22 percent v. 3 percent; evangelical Christians, 18 percent v. 10 percent. Among all Americans, four times more indicated improved opinions (27 percent) than worsening ones (6 percent) of Francis due to his stance on climate.

“If anything, it appears that the Pope’s engagement on this issue has only served to bolster his own base of public support within the United States,” researchers said in a blog post for the Brookings Institute.

In Laudato Si’, Francis described climate change as “a global problem with grave implications: environmental, social, economic, political and for the distribution of goods. It represents one of the principal challenges facing humanity in our day.”

“The climate is a common good, belonging to all and meant for all. At the global level, it is a complex system linked to many of the essential conditions for human life. A very solid scientific consensus indicates that we are presently witness­ing a disturbing warming of the climatic system. In recent decades this warming has been accom­panied by a constant rise in the sea level and, it would appear, by an increase of extreme weather events, even if a scientifically determinable cause cannot be assigned to each particular phenom­enon.

“Humanity is called to recognize the need for changes of lifestyle, production and con­sumption, in order to combat this warming or at least the human causes which produce or aggra­vate it. It is true that there are other factors (such as volcanic activity, variations in the earth’s orbit and axis, the solar cycle), yet a number of scien­tific studies indicate that most global warming in recent decades is due to the great concentration of greenhouse gases (carbon dioxide, methane, nitrogen oxides and others) released mainly as a result of human activity. Concentrated in the at­mosphere, these gases do not allow the warmth of the sun’s rays reflected by the earth to be dis­persed in space. The problem is aggravated by a model of development based on the intensive use of fossil fuels, which is at the heart of the worldwide energy system. Another determining factor has been an increase in changed uses of the soil, principally deforestation for agricultural purposes.”

Looking more closely at the effect of Laudato Si’ on global warming thinking, the National Surveys on Energy and Environment found a slight Francis effect, with 15 percent of Americans citing the encyclical as more convincing that global warming is occurring and there is a need to act, compared to 3 percent coming away less convinced. Catholics reported along identical percentages.

While 15 percent seems on its face a small value, Barry Rabe, one of the study’s researchers, said in this case it helps in part explain a jump in American perception of climate science: For the first time since fall 2008, when the survey began, 7-in-10 Americans believe there is solid scientific evidence of global warming.

“Most did not have a reaction to [the pope’s encyclical], but that’s an unusually high ratio for responding to what any individual might say on climate change,” said Rabe, the Director of the Center for Local, State, and Urban Policy at the University of Michigan’s Gerald R. Ford School of Public Policy.

He said the climate science question in the survey would normally show a change of 1 to 2 percentage points, which has largely been the case since fall 2011. Within that context, a 5:1 ratio of people acknowledging an encyclical effect on their views gains added significance.

The pope was one of three significant factors the poll found influencing American opinion on climate, the other two being personal weather observations (whether in their backyards or national trends) and growing recognition of drought conditions. While other public figures have voiced support of climate science, such as former Vice President Al Gore, none when referenced in a poll question have moved the needle in the same way as Francis, Rabe said.

“There was very little movement one way or the other in response to Gore, or other figures who have kind of entered the scene in major ways. This was different,” he said.

The fall 2015 survey was the first to include a question about the pope, but Rabe said they have considered making it a permanent part of the battery.

Editor's note: This story has been revised to clarify increases of percentage points, rather than by a percent.