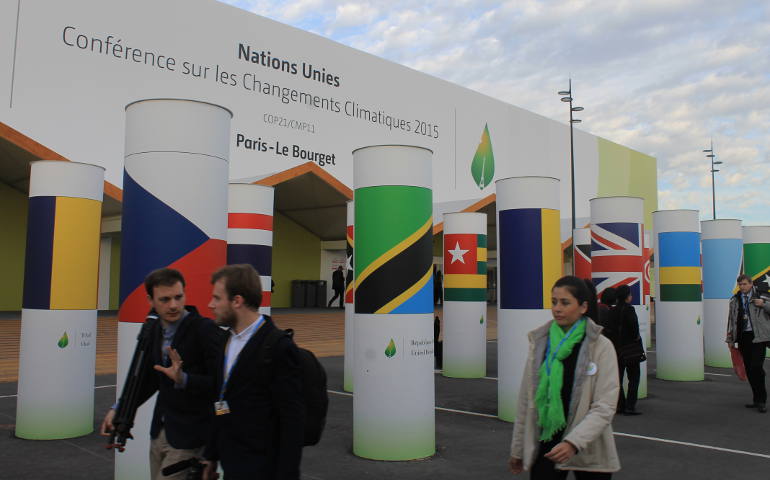 A kinetic atmosphere pulsed at the public venue Monday here at COP21, the United Nations climate summit now into its second and final week. Throughout the makeshift conference hall known as the Climate Generations Area, participants pedaled stationary bikes to power everything from a cellphone charging station to a sound system to smoothie blenders.

More than a symbol of human oomph, the circulating feet reflected the collective drive of civil society to push diplomats at the high-level negotiations toward a substantial and transformational deal to address climate change.

COP21, formally the 21st Conference of the Parties of the U.N. Framework Convention on Climate Change, began one week ago. It has a deadline of Friday for the 195 member nations to unanimously reach agreement on an accord that seeks to cut greenhouse gas emissions toward holding global warming to 2 degrees Celsius or perhaps lower, and provide financial support to developing nations to sidestep fossil fuels for clean energy in growing their economies, as well as to adapt to already-present climate impacts.

On Saturday, official negotiations handed off to ministers in the form of a 38-page document, slimmed from the 50-plus-page text that arrived at the COP’s beginning. Still, bracketed phrases fill the pages en masse, indicating hotly contested issues, among them:

The latter two top priority lists for island nations -- and numerous religious groups supporting their cause -- who fear failure on either could lead to the end of their livelihoods and homes.

While COP21 proceeded in its first week, scheduling coincidences allowed Pope Francis to host the leaders of two island countries: Benigno Aquino III of the Philippines, on Friday, and Tuilaepa Lupesoliai Sailele Malielegaoi, of Somoa, on Thursday. Both audiences included discussions of the COP21 proceedings, the Vatican reported.

At his Sunday angelus, Francis said he has closely followed the summit, and asked those present in St. Peter’s Square to pray that the Holy Spirit “enlighten all those who are called to make such important decisions and give them the courage always to let themselves be guided in their decisions by the criterion of the greater good of the human family.”

“For the good of our common home, for all of us and for the future generations, every effort should be directed toward mitigating the impact of climate change and, at the same time, curbing poverty and enabling human dignity to flourish,” the pope said.

Recognition of such an integrated agenda among U.N. officials was a “conceptual breakthrough” that only occurred in the past several years, Jeffrey Sachs, special advisor to U.N. Secretary-General Ban Ki-moon, told an audience at Columbia University's Paris-based school Monday night.

“But by now everyone understands that unless the climate change is brought under control, there can be no sustained gains in poverty reduction -- it’s impossible. And the first ones to lose from human-induced climate change will be the poor, people living in the most fragile environments,” he said.

Sachs, also a noted economist, has taken part in numerous conferences and events hosted by the Vatican, most recently speaking on a panel discussion at Fordham University in New York on Francis’ encyclical “Laudato Si’, on Care for Our Common Home” with Cardinal Oscar Rodríguez Maradiaga of Honduras.

The Paris agreement presents the “first test” of the sustainable development goals, he said, which in addition to combating climate change include ending poverty, achieving gender equality and ensuring affordable, reliable, sustainable energy for all. A failure to adopt a climate deal would not only represent “a profound collapse of will of this agenda,” Sachs said, but make it near impossible to achieve the remainder of the sustainable development strategy.

Amid such dire straits, Sachs offered a guess that diplomats would reach a “sufficiently vague” agreement that provides a framework to allow for future growth, but one that won’t result in a “mission accomplished” declaration at the conference’s conclusion.

“Nothing at the end of this week will allow us to take a break and say, well that’s one done and now we go on to another issue,” he said.

Instead, Sachs laid out the full complexity of the climate talks, saying the massive undertaking to achieve even a 2 C ceiling of warming will require a fundamental transformation of the energy system on a global scale that’s “far larger than almost any government has acknowledged to this point.” Two aspects of the transition -- finances and technology -- provided the context for the night’s other two speakers, Erik Solheim, former environmental and developmental minister of Norway, and Jean-François Gagné of the International Energy Agency.

“But the extent of the transformations required here could go right to the core of the world economy, which is the energy system,” Sachs said, “and do an energy transplant and keep the patient alive, when the patient is a $100 trillion world economy, and keep it growing and moving while you’re replacing the heart of the system.

“We’ve never done that before. So, this isn’t easy,” he said.