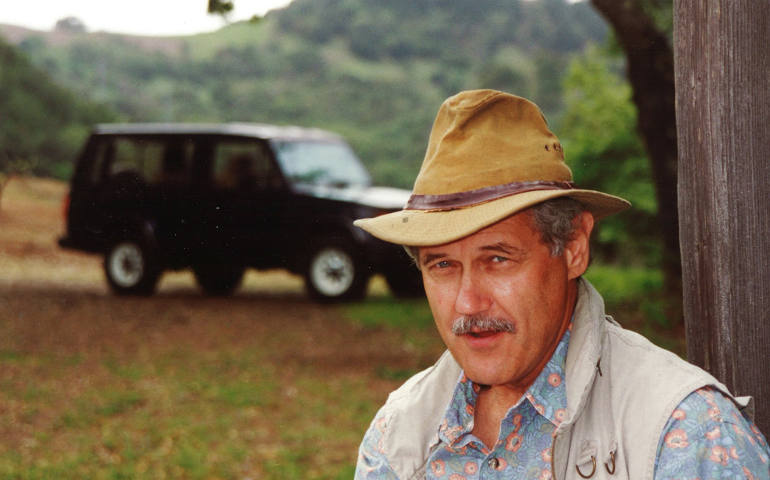 Dan Turner -- author, mystic, advocate and a former Dominican priest -- died on Christmas Eve 2015 at the age of 81. (Bonnie Nelson)

Dan Turner earned his training wheels as a mystic when he was just 10 years old. His teacher? A little prairie, brimming with wild, untamed greenness that lived just beyond the backyard fence of his family’s Chicago home.

“The prairie grounded him for life,” said Elizabeth Turner, his wife of 44 years. “He met God in nature. He saw the cosmic in the very simple.”

Dan Turner’s green, mystical life ended in the early morning hours on Christmas Eve. Turner, 81, had battled Alzheimer’s disease since 2010. On his bedside table at the Oakland, Calif., care center, where he had spent his last months, rested a copy of When the Trees Say Nothing, a book by Kathleen Diegnan that explores the connection between the nature spiritualties of Thomas Merton and Thomas Berry -- two of his favorite writers.

Prior to his illness, the former Dominican priest’s life had been an ongoing quest for environmental and social justice on behalf of the earth, the poor, youth and the LBGT community; he advocated for peace and for Catholic acceptance of married and women priests. Hierarchy was never a part of his understanding, said his wife. “He always had a conflict with the doctrinal God of the Catholic church.”

Like many others, the best way to understand the basis for Dan Turner’s modus operandi is to delve into some of his words. Turner’s essay on “The Prairie” appears in A Ragged God, a 2015 collection of his poetry and reflections. His soul-set is right there.

“The Prairie” tells of 10-year-old Dan’s fascination with ants. He wrote, “I tried to will myself small in order to become the familiar of ants that nervously practiced their arts before my unblinking eyes. … I hoped that one ant would emerge as an individual with a special walk or an unusual antenna that I could remember and come to know as a friend. I used to whisper my name through the grass so the ants would get familiar with me and not fear my head when it came like a hairy meteor into their sandy world. Sad to say I never did get to know any ant as an individual pal, but then I never saw them all.”

In another excerpt, Turner reveals some of the prairie’s life lessons: “Green was more than a color. Green was an entity. It had substance. And deeply beyond all appearances, it had language. In that prairie was the possibility that reached so far behind history, beyond the awareness of reason, that connected back to a time when our infant species was held in the lap of the great Mother -- with all the other species. And together, we knew wind and movement, and shadow and light as language.”

In the ensuing years, he wrote in the essay, sometimes “there would be a green flash of memory” when Turner realized once again, that “being was resonating unto being. The basic relationship of sameness shared among all of us: earth, weeds, bugs and me. I placed no hierarchy there, because to do so would destroy the possibility of communication. I would not be able to see with the bug’s eye nor hear the ancient talk of the earth nor feel the power the prairie held were I to establish various levels of being among all of us friends inhabiting that plot of ground.”

For Dan Turner, everything was connected. Top-down separation, forgetting the listening and seeing, such things destroyed those connections.

His life beyond the prairie emerged as a call to service as a Dominican priest. After completing high school, Turner entered the Dominican novitiate at Winona, Minn, where he began writing for Listening, a magazine launched by his classmate Matthew Fox.

After his ordination in Chicago in 1965, Turner taught at Fenwick High School in Oak Park for three years, spending his off hours participating in the civil rights and peace movements.

During the 1968 Democratic National Convention he and Michael Stephen, another classmate and friend for 56 years, jointed thousands of Vietnam protestors in Grant Park gathered to demand Sen. Eugene McCarthy be included as a presidential candidate. The two narrowly escaped the tear gas and the parade of National Guard trucks pushing through the crowds, recalled Stephen, a retired psychologist and former Dominican.

Turner’s journey, which had begun in the prairie, would veer more and more to the streets to witness against violence and injustice. “He was a champion of the underdog and could always be counted upon to give a personal voice, but he never sought to be in the limelight,” said Stephen.

Later in 1968, Turner attended a workshop sponsored by the Appalachian Study Center. A Catholic outreach organization, the center ministered to poor Appalachians who had migrated to large Midwestern cities after mechanization replaced their jobs in the coal fields.

“We were doing the kind of work he wanted to do,” said Elizabeth Turner, at the time part of the staff.

The workshop included a tour into the poor streets of Chicago. It changed Dan Turner’s life. He began volunteering at the center, but soon learned that Cardinal John Cody frowned upon priests working from storefront ministries, Elizabeth recalled. Turner would leave the Dominican order in 1969. Three years later, he and Elizabeth married in the chapel of what is now Dominican University, in River Forest, Ill; his old friend Michael Stephen presided.

“I think I always envied the individuals he was working with, said Fox, “because I knew he would give them both the friendship and the firm direction that suited their needs and his personality.”

When Turner retired from the court in 1990, he began editing Creation Spirituality magazine for Fox in Oakland. “My instructions were to build community with my tribe. They excelled at it. Every time I visited the magazine office there was high energy, laughter, hijinks but also good work and a very solid magazine,” he said.

Fox lauded Turner for “wonderfully marrying the mystical and the prophetic issues of the day ranging from Central America to women to indigenous rights to men’s spirituality.” A former staff member at the magazine credited Turner with saving his life.

“I don’t know where I’d be today if it hadn’t been for Dan. He was there for me,” said John Mabry, who found Turner a “surrogate father” after he felt estranged from his parents upon coming to the magazine.

Mabry visited Turner in his final days, saying his mentor recognized him “up to the very last.” Although he could not speak, Turner seemed to enjoy visitors reading to him from the Merton book, Mabry said.

At the professional level, Mabry said Turner created a fun work environment that placed the good of the people above dollars and cents. Disputes between Turner and Fox, including the latter’s decision to join the Episcopal church, led Turner to leave Creation Spirituality in 1995.

His retirement quickly became as busy as his former work life, as he and Elizabeth walked 20 miles a day around Oakland’s Lake Merrit in preparation for a marathon peace walk later that year across parts of Europe and Asia with a group of Buddhists, Hindus and Catholics. The nine-month interfaith journey commemorated the 50th anniversary of the end of World War II and took them to, among other places, Auschwitz and Hiroshima.

After their return, Dan Turner revealed a bit of his mystical side in an interview with the Oakland Catholic Voice diocesan newspaper. As he looked through an Auschwitz prison window, he saw a man in a prison uniform gazing out. It was obvious that the man was in great distress and Turner could feel it.  After a few minutes, Turner whispered, “You can rest now.” The agitation ceased. Turned didn’t believe his vision was a trick of imagination.

“In eternity, there is no time. Everything is now. Perhaps when he was in prison, he too had a vision of people carrying candles and singing a peace chant. I like to think it gave him hope,” he said.

Other ventures would have Turner work with The Radio Project in Oakland, but he also found time to resume some picketing activities. For most of 2010, he joined a group of protesters two hours every Sunday morning at the Cathedral of Christ the Light frustrated with church silence on such topics as married priests, women priests and clergy sexual abuse.

“When people would ask him if he went to church, Dan would answer, ‘Oh, yes, I go to church every Sunday to picket the Cathedral,’” said Tim Stier, the former diocesan priest who organized the protests.

Stier added, “Dan was determined to having his sign seen by as many people as possible. So rather than just stand around chatting with me or other protesters, he would walk down to the corner of Grand and Harrison or even walk out and stand with his sign on the median strip on Harrison.”

From the prairie to the middle of the street, to walk his talk. That was Dan Turner’s legacy.

Two celebrations of life for Dan Turner are scheduled, the first on Jan. 31 in the chapel of Dominican University, and the second set for noon on March 12 at St. Mary’s Senior Center in Oakland.

[Sharon Abercrombie is a frequent contributor to Eco Catholic. She first met Dan Turner in 1992, when he invited her to write a story for Creation Spirituality Magazine, and their paths continued to cross through the years via journalistic ventures, book clubs and environmental retreats.]