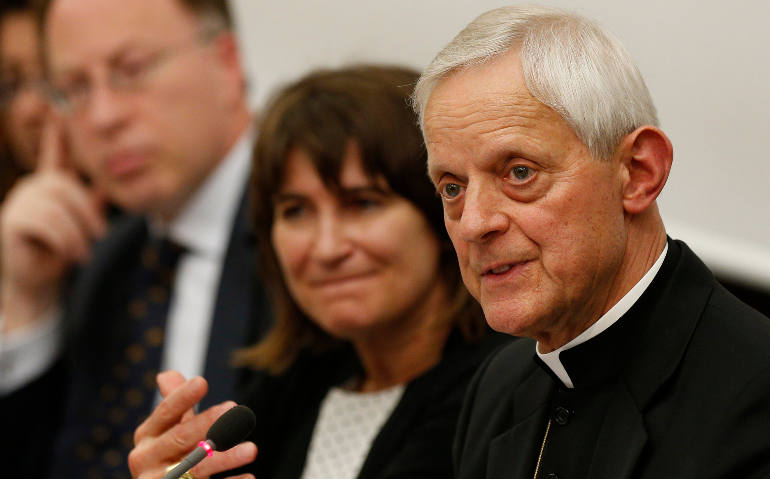 Cardinal Donald W. Wuerl of Washington speaks at a conference on climate change at the Pontifical University of the Holy Cross in Rome May 20. (CNS photo/Paul Haring)

Free enterprise and sustainable development, economic profits and progress and environmental protection are not goals in conflict, but ones hand in hand, a U.S. cardinal said Wednesday in Rome.

The remarks from Cardinal Donald Wuerl, head of the Washington archdiocese, came during the Conference on the New Climate Economy, held at the Pontifical University of the Holy Cross, in Rome. The international meeting was co-sponsored by the Pontifical Council for Justice and Peace and the Netherlands embassy to the Holy See, with the World Resources Institute and Global Commission on the Economy and Climate also partaking.

“The need for sustainable development solutions is both a moral imperative and an economic incentive as a business issue. To take it up courageously is pro-business,” he said, while also noting the clear need for “strong international agreements” among governments.

“The Church has always taught that profit is licit, but business must also serve the common good and pursue justice. A new climate economy should prioritize sustainability (justice and solidarity between peoples and across generations), as today’s theme states: economic growth and sustainability must go hand-in-hand,” he said.

The D.C. cardinal continued: “Businesses large and small have much to contribute and much to gain. It is surely in our tradition to look to free enterprise for creativity in developing the 'engine' (energy) of a more climate-friendly and sustainable economy, both domestically and internationally."

In addressing environmental concerns with his upcoming encyclical, Wuerl said Pope Francis is following his predecessors in reading the “signs of the times,” with the present giving rise to “a new awareness that the human family, if it is to thrive, is being called to a deeper solidarity on behalf of the environment.” Another sign, he said, is the issue of sustainable development, in the context of addressing climate change and the need for economic growth for all nations.

The church, Wuerl said, has an important role to play in helping the human family “recalibrate” its relationship with the environment, a role less focused on judging scientific questions and more on offering moral parameters to evaluate solutions.

He offered three principles that the church uses in engaging economic and political arenas:

“At the same time we must recognize our grave duty to hand the earth on to future generations in such a condition that they too can worthily inhabit it and continue to cultivate it,” Wuerl said, referencing “Caritas in Veritate,” Pope Benedict XVI’s 2009 encyclical. “There is an increasingly clear harmony between efforts on behalf of the environment and those that promote integral -- including economic -- human development. This is the ‘human ecology’ to which our efforts must contribute.”

In his own comments, Cardinal Pietro Parolin, Vatican secretary of state, said the climate economy conference was timely, given the United Nations is set to meet in New York in September to adopt a new development agenda, and later in December in Paris to potentially sign an international agreement to address climate change.

“When the future of the planet is at stake, there are no political frontiers, barriers or walls behind which we can hide to protect ourselves from the effects of environmental and social degradation,” said Parolin, after quoting Francis’ message to the U.N. climate negotiations in Lima.

He acknowledged the path forward toward a new development model is not easy, but emphasized that the technology to do so are largely already available or within reach.

“We have the capacity to start and strengthen a true and beneficial process which will irrigate, as it were, through adaptation and mitigation activities, the field of economic and technological innovation where it is possible to cultivate two interconnected objectives: combating poverty and easing the effects of climate change,” Parolin said.

A version of this story appeared in the June 5-18, 2015 print issue under the headline: Sustainable development is pro-business, says cardinal.