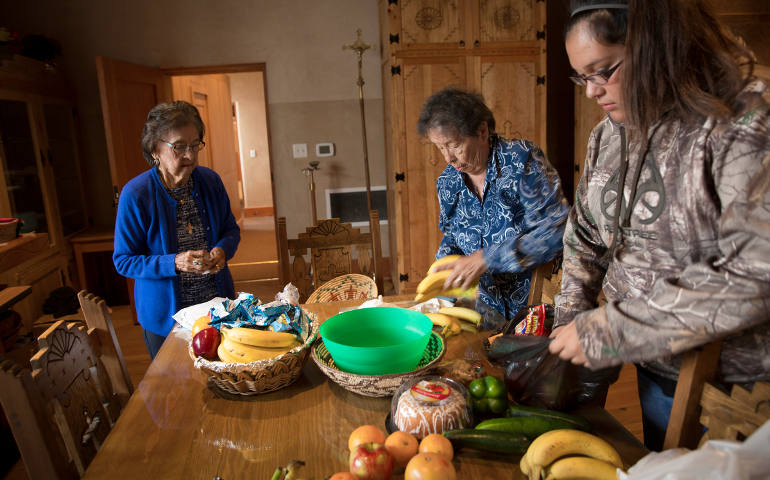 Food given during the offertory at St. Augustine Mission is organized by women to be distributed to the needy in the Pueblo of Isleta, N.M., in this November 2014 photo. (CNS photo/Nancy Wiechec)

The Gospel story of the feast of the multiplication of loaves and fish ends with Jesus instructing his disciples to gather the leftovers, "so that nothing will be wasted." That’s a message the U.S. Environmental Protection Agency hopes to tap into with Christian and other faith communities through a new initiative.

Earlier this month, EPA launched its Food Steward’s Pledge, a campaign aimed at raising faith communities as leaders and leading advocates in reducing food waste, and along with it, hunger.

By signing on as Food Stewards, faith organizations receive a toolkit and other resources to learn about food waste and help them audit their current waste levels, beginning by assessing shopping habits as well as what’s already in the fridge.

The food stewardship resources offers how-to’s on reducing food waste as well as donating and composting. A Food Waste Management Calculator allows congregations to track cost savings with other ways of disposal beyond the dumpster. Other tips address how to better organize a kitchen so older food is used first, to prepare meals with extras, and to properly prep and store fruits and vegetables to stay fresh longer.

The Food Recovery Challenge, another EPA program, encourages faith groups and other organizations to redirect food from landfills and toward food pantries and kitchens.

"Faith communities exemplify caring for the well-being of all people and are leaders in being responsible stewards of our resources for current and future generations," said EPA Administrator Gina McCarthy at a launch event for the program Jan. 18 at the D.C.-based Miriam’s Kitchen, a non-profit food kitchen seeking to end chronic homelessness.

McCarthy called the goals of reducing, donating and composting excess food "a triple win that protects the environment, cares for the global human family, and saves organizations and Americans money."

According to the Food and Agriculture Organization of the United Nations, a third of produced food is lost or wasted globally, the equivalent of 1.3 billion tons annually at a cost of $750 billion. At the same time, roughly 800 million people, primarily located in developing countries, are undernourished. The World Health Organization estimated in 2014 that 1 in 7 children in developing regions were underweight, most of them located in southern Asia.

The U.S. Department of Agriculture estimates the nation’s food waste represents 30-40 percent of the food supply. EPA reported that Americans wasted 37 million tons of food in 2013 (a total that has sharply risen in recent years) and that food waste averages $1,600 of sunk cost annually for a family of four. More than throwing money away, food waste represents an environmental threat. Food, the largest component in landfills (21 percent in 2013), as it decomposes releases into the atmosphere methane, a greenhouse gas more potent than carbon dioxide.

The Food Steward program is an extension of a larger EPA program that targets reducing wasted food by 50 percent by 2030.

Two of the 17 U.N. Sustainable Development Goals, adopted in September shortly after Pope Francis addressed its general assembly, address food issues. Goal 2 seeks to end hunger by 2030 and provide all people access to sufficient, nutritious food year-round. Goal 12 tackles food waste directly, placing a target by 2030 of halving per capita food waste at the retail and consumer levels; it also aims to increase awareness of sustainable consumption and production practices.

The issue of food waste has been a persistent focus of Francis’ papacy, referring often to a "culture of waste" in consumption beyond food. On the occasion of World Environment Day (June 5) in 2013, he lamented the culture of waste where "men and women are sacrificed to the idols of profit and consumption. Such a culture, Francis said, makes us insensitive to wasting and throwing away excess food, which is especially condemnable when, in every part of the world, unfortunately, many people and families suffer hunger and malnutrition."

He continued: "There was a time when our grandparents were very careful not to throw away any leftover food. Consumerism has induced us to be accustomed to excess and to the daily waste of food, whose value, which goes far beyond mere financial parameters, we are no longer able to judge correctly.

"Let us remember well, however, that whenever food is thrown out it is as if it were stolen from the table of the poor, from the hungry!” he said, asking people to reflect on the problem of food waste and to identify ways to address it while also “convey solidarity and sharing with the underprivileged."

Francis drove that point home in his encyclical "Laudato Si’, on Care for Our Common Home," in discussing waste in another arena: water. The pope described water access as "a basic and universal human right," and said its continued waste -- in developed countries as well as developing nations with abundant supplies -- shows the problem "is partly an educational and cultural issue, since there is little awareness of the seriousness of such behavior within the context of great inequality."

During that general audience on World Environment Day 2013, Francis connected food waste with the biblical story of the multiplication of the loaves. He noted Jesus had his disciples gather the leftovers in 12 baskets.

"Why 12? What does it mean?" Francis asked. "Twelve is the number of the tribes of Israel, it represents symbolically the whole people. And this tells us that when the food was shared fairly, with solidarity, no one was deprived of what he needed, every community could meet the needs of its poorest members. Human and environmental ecology go hand in hand."