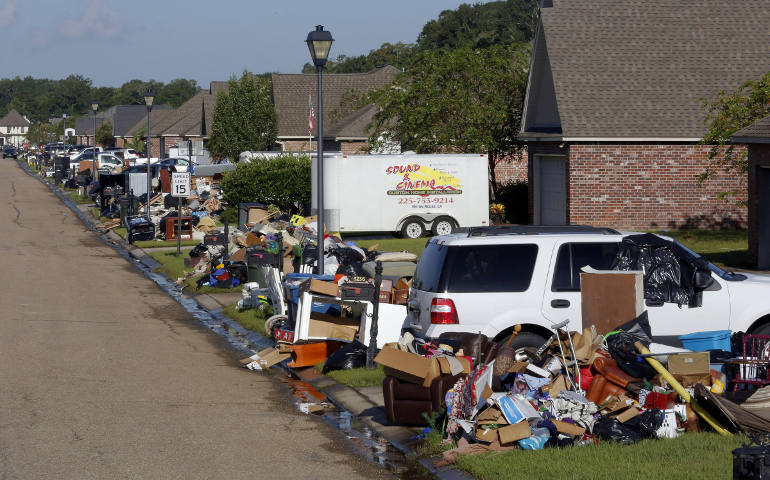 With a sadness in his voice, Galea, pastor at Holy Rosary Church in St. Amant, estimated that as many as 90 percent of his parishioners were impacted during the recent historic flooding that touched nearly every corner of the Baton Rouge diocese.

"It's going to change the whole dynamic of Holy Rosary as a parish as we know it," Galea told The Catholic Commentator, the diocesan newspaper. "It's not going to be the same. And we are going to lose quite a bit of people if they choose to move away.

"But hopefully with love and compassion and a lot of hugs we can become a family all over again. That is what is most important is for us to be together again."

Coming together as a family, whether it is a community, church parish or simply a family dinner, is a question many are asking in the wake of the floods that in some area dumped 20 inches of rain in as many hours. The carnage is stunning.

In Central, it is estimated 27,000 out of 28,000 people were impacted, leaving some to speculate if the suburban community will be able to recover.

In Livingston Parish, a civil jurisdiction, at least 75 percent of residents suffered some type of water damage, with most of the destruction major. Residents in the civil jurisdictions of East Baton Rouge, Ascension and Tangipahoa parishes also were forced to dig out.

Much of Zachary was damaged, as the wide swath of destruction seems endless. In the aftermath many residential streets appeared to be mere passes surrounded by mountains of debris. And the stench permeates one's pores, a smell that eventually subsides but never leaves.

Schools were closed, many for weeks, and businesses were struggling to reopen. Curfews were enacted in civil parishes throughout to lessen the threat of looting in the impacted areas.

Some estimates are as high as 100,000 homes damaged, with thousands fleeing to evacuation shelters. The floodwaters claimed 13 lives, and many others survived only after being rescued from their rooftops, reminiscent of Hurricane Katrina 11 years ago.

"We were straight up survival mode," said Tim Hasenkampf, a Baton Rouge fireman who lives in Port Vincent and lost his house because of flooding.

"It's been tough," added Hasenkampf, who along with his friend spent hours in their private boats rescuing people from their homes in the area.

According to Joe Ingraham, chief financial officer for the Baton Rouge diocese, six churches took on water and the parish schools at two of those also were damaged. Cristo Rey Baton Rouge Franciscan High School, which opened in August, was inundated with 4 feet of water and has to relocate.

Although the damage was widespread and costly, Ingraham managed to see the silver lining in the storm clouds that blanketed the area for nearly a week.

"It could have been worse, when you see four churches out of 71 severely damaged," Ingraham said. "The worst thing is the damage to our parishioners and their homes."

He said St. Alphonsus and Immaculate Conception were the most severely damaged, each with likely at least $1 million in damage. Those two churches along with St. Anne and Holy Rosary each had flood insurance for up to $500,000 per building, Ingraham said.

Although St. Anthony and St. Jean Vianney did not have flood insurance because they were in areas that previously had never experienced any type of flooding, they are covered under a policy through the diocese.

The storm, which first began to unleash its nearly weeklong fury Aug. 12, packed a one-two wallop that drove water into areas that had never experienced flooding. Initially, torrential rains from the slow-moving system initially caused street flooding, which also forced water into homes.

But the greater damage came in the days that followed as area rivers overflowed their banks and flowed unfettered into neighborhoods, businesses and even major thoroughfares.

At one point, Interstates 10 and 12, the two main arteries in and out of Baton Rouge, were closed. Along I-12, some motorists were trapped in their cars for more than 30 hours, presenting a unique opportunity for ministry for Fr. Jamin David, pastor at St. Margaret of Scotland Church in Albany.

After surveying the 20 acres encompassing the parish grounds, David's focus shifted to the stranded motorists, who were without food, water or even a bathroom.

"We opened up our facilities to everyone," David said. "It became a humanitarian effort. Really, it was the multiplication of the fishes."

He said one stranded motorist was a caterer initially headed to Abita Springs, less than 40 miles from Albany. The caterer asked if she could use the parish's stove to cook the food she had with her so it would not go to waste.

"We opened up the kitchen and fed about 500 people," David said, adding that the 20 acres around St. Margaret were fine but many of their parishioners have suffered major flooding.

Even as the waters continued to rise, donations, in the form of cash, clothes, gift cards, cleaning supplies and other necessities began to filter in from all over the world. On Tuesday, the Knights of Columbus donated $200,000 to the diocese and another $30,000 to the Knights' Louisiana State Council.

In an ironic twist, a tractor-trailer from the University of Alabama dropped off a truckload of supplies at the Catholic Charities Diocese of Baton Rouge's warehouse.

Pilots for Patients, a Louisiana-based volunteer pilot organization, flew in three Cessna planes loaded with supplies for the diocese to distribute.