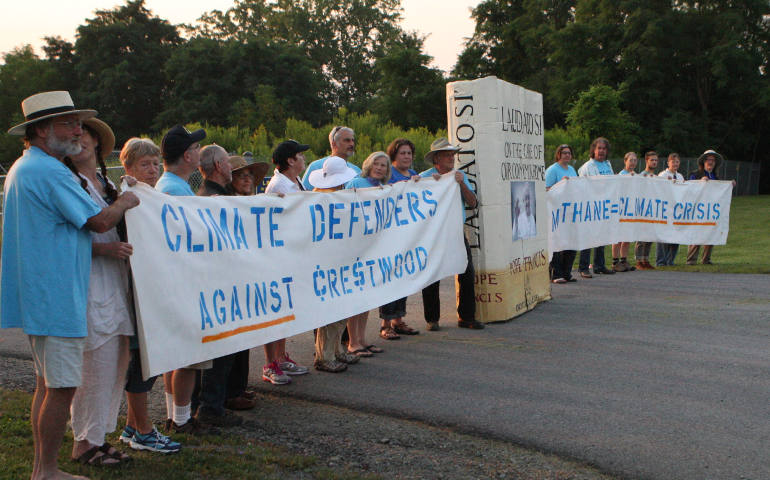 Prayer services, social media campaigns, workshops and webinars are set to celebrate the one-year anniversary of Pope Francis’ social encyclical on the environment, “Laudato Si’, on Care for Our Common Home.”

A year ago on Saturday, June 18, the Vatican published Laudato Si’. Since that time, Catholics communities, as well as secular groups, have used the text as a rallying point to engage environmental issues and take steps toward transforming its teachings into actions.

The days leading up to Saturday’s anniversary will highlight the steps already taken as well as revisit some of the text’s major teachings.

To that effect, the Global Catholic Climate Movement has marked this week as Laudato Si’ Week. Through its 500-member Laudato Si’ animator program, it has at least 300 events scheduled across six continents. The activities range from prayer services and special petitions during Masses, to training workshops, film screenings and art exhibits.

Both the Global Catholic Climate Movement and U.S.-based Catholic Climate Covenant, itself celebrating this month its 10-year anniversary, have produced parish guides to help communities shrink carbon footprints and waste while growing awareness and advocacy efforts related to environmental degradation and the people put in danger as a result.

During a teleconference Monday, Dan Misleh, Catholic Climate Covenant executive director, said he was “enormously proud” of the church’s efforts so far in responding to Francis’ moral call in Laudato Si’ for all of humanity to act in the face of global environmental degradation and climate change.

“Pope Francis affirms the clear link between the importance of caring for God’s creation and the dire consequences for the poor from a climate-threatened world,” he said.

Misleh said it’s difficult to keep up with all activities that have stemmed from the encyclical, such as parishes reducing energy use and waste, religious orders divesting their portfolios from fossil fuels, academic institutes hosting multi-disciplinary conferences, and others engaging in advocacy for policies reflecting its teachings.

At the beginning of June, the Covenant launched a social media campaign aimed at sharing how people have been inspired by Laudato Si’ so far. Users can share their thoughts by downloading a campaign card from the covenant website and sharing it on social media using the hashtag #CreationCare. A similar campaign from Global Catholic Climate Movement asks people to post a selfie on Twitter or Instagram with the hashtag #LiveLaudatoSi to share how they are doing just that.

While the first year showed signs of noticeable progress, leaders on promoting the encyclical recognize the long path still ahead.

A May poll released Monday from the Center for Applied Research in the Apostolate at Georgetown University found 32 percent of U.S. Catholics (28 percent of Americans) had heard or read about Laudato Si’, while 56 percent (61 percent of Americans overall) had not heard of it. CARA pointed out that, in general, there is generally low awareness of papal documents.

At the same time, six-in-10 Catholics in the CARA poll agree that global warming is occurring and is largely a result of human activity -- a percentage roughly on par with U.S. adults overall but trailing believers in non-Christian faiths (79 percent) and the religiously unaffiliated (70 percent).

The survey’s overall results, Misleh said, make it “clear our collective efforts [in the past year] have made a difference,” pointing to findings that a wide majority of Catholics, whether aware of the encyclical or not, support societal climate action.

As part of an effort to reintroduce and re-engage the actual text, the Global Catholic Climate Movement has scheduled a series of five webinars dissecting and discussing the encyclical’s six chapters from the perspectives of a diverse field of religious and secular experts.

The webinar and Laudato Si’ Week are an extension of awareness-raising around the encyclical, said Tomas Insua, co-founder of the Global Catholic Climate Movement. That’s been an important component, given that many in the wider church are new to the issue, especially compared to other faiths.

“There has been a lot of awareness raising, and it will continue to be a priority,” he told NCR.

Overall, Insua pointed to the Philippines and Brazilian churches as taking a lead on implementing the messages of the encyclical, with both well-engaged in environmental issues pre-Laudato Si'. In the U.S., Bishop Oscar Cantú, chair of the U.S. Conference of Catholic Bishops Committee on International Justice and Peace, said during the Monday teleconference that the conference has integrated care for creation into its long-term priorities planning, and that it will introduce a “multi-faceted implementation plan” during their annual fall meeting.

In addition, Cantú said the conference is dedicating additional staff resources to its environmental justice program so to better analyze and form official positions on national and state legislation related to the encyclical’s themes. In the past year, the bishop estimated conference staff met with and briefed “well over” 100 members of Congress and their staffs and White House officials on issues related to creation care and climate change.

Maria Vorel, senior vice president for disaster operations for Catholic Charities USA, said the encyclical provided an opening for collaboration at the federal level, with the Obama administration inviting them to identify natural disaster preparedness measures, with particular focus toward vulnerable populations.

“Laudato Si’ crystallizes the reality of disasters in the U.S.,” she said, adding it calls not just for compassionate care to those impacted, but an assessment of environmental and land-use policies toward addressing the needs of those at risk.

Cantú added that beginning in the fall, the conference, in partnership with Catholic Climate Covenant, a pastoral education program on the encyclical, with an aim of reaching at least 30 dioceses and 500 priests in the next three years.

“In our own nation, the bishops of the United States are doing our part to foster this critically important dialogue about our common home,” he said.

Misleh told NCR that increasing pastoral engagement is a priority, as he senses a lot of people are still trying to absorb the encyclical and all its teachings.

One thing that has struck him from the talks and presentations he has given in the past year is that Francis has been able to “really put the moral argument front and center.”

The CARA poll found 68 percent of Catholics (63 percent of U.S. adults) recognizing a personal moral responsibility to address climate change. However, the same percentage said papal statements did not strengthen that belief. Thirty-two percent of Catholics acknowledged some level of papal influence, but that percentage dropped with each of the lower-ranking clergy and parish leaders.

The impact of recognizing the moral dimension to environmental issues, Misleh said, is that people begin to develop a more personal connection to the environmental disruptions they see in the news, such as flooding in Texas or the drought in California, and with those who suffer as a result.

“People who stop and reflect on these things really begin to have a deep empathy for what’s happening, and I think maybe make the connection between these awful weather events and climate change, and then hopefully between that and their own behaviors,” he said.