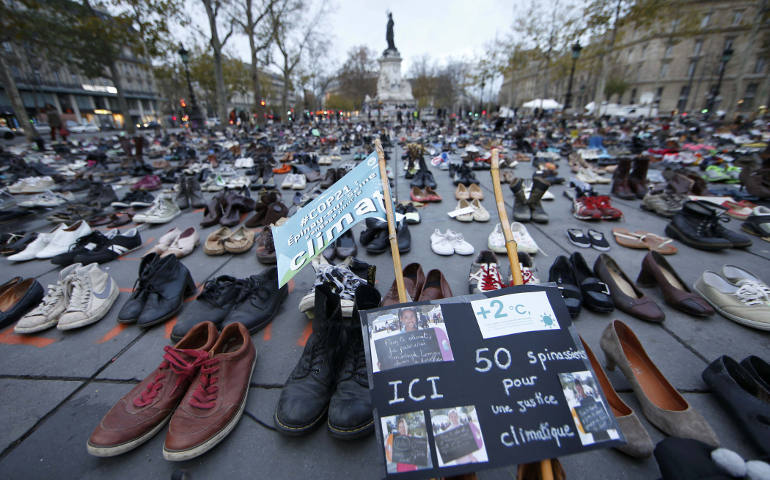 Pairs of shoes are symbolically placed on the Place de la Republique in Paris Nov. 29, ahead of the U.N. climate change conference, known as the COP21 summit, in Paris. (CNS photo/Eric Gaillard, Reuters)

Hundreds of thousands of people across the global map assembled in person and online over the weekend as a dual sign of solidarity and pressure for substantial climate action on the eve of a major United Nations summit in Paris.

The rallies, parades and at-times contentious demonstrations preceded the opening of the U.N. climate change conference, more commonly known as COP21. There, world leaders from each country are expected to sign a binding accord to limit greenhouse gas emissions in an effort to hold global warming below 2 degrees Celsius. The pre-COP21 events drew strong support from religious communities, including many Catholic communities and leaders.

While Pope Francis left earlier in the week for Africa, a pair of his shoes headed to Paris.

The papal shoes -- black Oxfords with a laminated sign above them adorning Francis’ signature and the words “Laudato Si’” -- joined thousands of other sneakers, slippers and pumps in a symbolic march at the Place de la Republique in Paris. The art installation served as substitute after an actual march of feet-filled shoes, anticipating hundreds of thousands in the French capital, was called off following the Nov. 13 terrorist attacks in the city.

Other religious leaders also contributed shoes to the virtual march, including Cardinal Peter Turkson, president of the Pontifical Council for Justice and Peace, and retired Cardinal Cláudio Hummes, president of the Pan-Amazonian Church Network (REPAM), which flanked the pair from the pope.

Avaaz, the global citizen’s network that organized the installation, also encouraged people to share photos of their shoes online, which would then be displayed in Paris. Emma Ruby-Sachs, Avaaz acting executive director, said that through the shoes, the pope joined thousands of Parisians unable to march on Sunday, in addition to another cancelled rally set for Dec. 12.

“Together with the hundreds of thousands who will take to the streets around the world this weekend, the Pope is sending a powerful signal that leaders arriving for the Paris summit simply must not ignore,” she said in a statement.

With Paris streets left largely to symbolism, the Global Climate March trudged forward elsewhere. Organizers anticipated more than 2,300 events in 150 countries over the weekend in a sign of global solidarity and focused pressure ahead of the official opening of COP21 on Monday. Numerous Catholic organizations, including Caritas Internationalis, Trocaire, CAFOD and the Global Catholic Climate Movement, had members and partner groups walking and carrying signs in the demonstrations.

A week before the marches, Turkson invited bishops worldwide to offer Eucharistic celebrations on Sunday “for a responsive and successful international conference and summit,” and asked that they encourage Catholics in their dioceses to join climate demonstrations in their regions.

“They will truly be exercising global ecological citizenship,” he said in the Nov. 23 letter.

Francis issued his own directive for the climate negotiations on Thursday, expressing hope to U.N. officials in Nairobi, Kenya that the Paris summit produces a "transformational" agreement" which "targets three complex and interdependent goals: lessening the impact of climate change, fighting poverty and ensuring respect for human dignity." He said the conference "represents an important stage" for developing a new global energy system that minimizes the use of fossil fuels and expands clean energy and energy efficiency.

"We are confronted with a choice that cannot be ignored: either to improve or to destroy the environment," Francis said.

On Saturday, Catholics and other religious people submitted to U.N. and French officials almost 1.8 million signatures to faith-based petitions seeking a decisive climate deal in Paris. Among them were 800,000-plus attached to the Catholic Climate Petition, to which Francis in May gave his endorsement.

The petition, organized by the Global Catholic Climate Movement, garnered support from 135 countries, with the Philippines -- where bishops organized signature drives -- providing the most from any one country. It called for drastic greenhouse gas emissions cuts that would keep global average temperature rise below 1.5 degrees Celsius, and aid for the world’s poor to cope with climate impacts.

Hummes and other religious leaders presented the petitions during the Faith in Climate Justice event in Saint-Denis, north of Paris. Among the 400 people in attendance were another set of climate marchers, these having walked to Paris from the United Kingdom, Italy, Germany and Scandanavia. That included Yeb Sano, the former Philippines climate negotiator, who led the People’s Pilgrimage from Rome to Paris.

“The pilgrimages represent, in a political way, that the time for talking is long over. Irrespective of what our leaders produce from Paris, across the globe we are working as communities and cities, as faith groups and organizations, and as pilgrims, walking together out of love, faith and hope that we can build a better future together,” Sano said at the event.

Hummes described 2015 as “a very special year for the Catholic Church and her response to the climate crisis.” He noted the June publication of Francis’ encyclical “Laudato Si’, on Care of Our Common Home,” as well as an appeal at the end of October from heads of Catholic bishops’ federations on each continent to COP21 negotiators for the “approval of a fair, legally binding and truly transformational climate agreement.”

But the weekend, he said, belonged to the grassroots.

The weekend won’t see the end of public events and displays all pushing for a climate deal. On Monday, Franciscans International is encouraging Franciscans and others worldwide to join a Ramadan-style “fast and feast” for the protection of God’s creation. The group and others have also set up prayer vigils to continue throughout the climate conference’s two weeks.