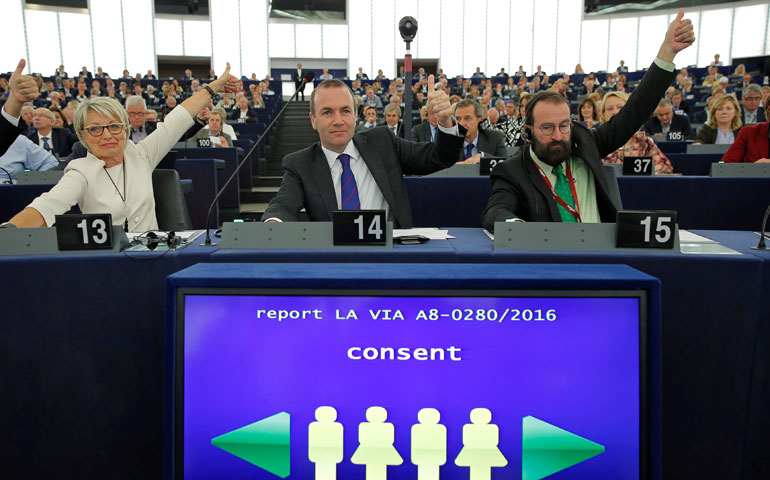 Members of the European Parliament vote in favor of the Paris U.N. COP21 climate change agreement Oct. 4 at a plenary meeting in Strasbourg, France. (CNS/Reuters/Vincent Kessler)

A year ago, the global community was gearing up for perhaps its final round of intense negotiations to hammer out the first international pact since 1992 to protect the planet, "our common home," as Pope Francis describes it. Now with an in-force Paris Agreement in hand, that same global community arrives in Morocco in November with eyes toward reaching the lofty climate goals it put on paper.

The Paris Agreement officially enters into force Nov. 4, three days before the start of COP22, the latest round of United Nations climate talks, and a month after the European Union's vote to ratify the agreement pushed the deal across the legal threshold. The landmark agreement required ratification by at least 55 countries representing at least 55 percent of global greenhouse emissions.

Its "entry into force" triggers the launch of a governing body, and locks each country's climate plan, which can be strengthened but not weakened, and obliges the countries, though absent enforcement measures, to work toward the agreement's temperature goals.

The deal holds all nations to curb greenhouse gas emissions toward keeping average global temperature rise "well below" 2 degrees Celsius (3.6 degrees Fahrenheit), and “to pursue efforts to keep below 1.5-degree C.” As it currently stands, the national pledges on which the agreement was sealed would only limit temperature rise roughly 3 degrees C; the agreement commits countries to ratchet up pledges every five years, beginning in 2020.

Eighty-one countries accounting for roughly 60 percent of global emissions have ratified the agreement as of Tuesday.

That includes both the U.S. and China: The world's two leading economies, together representing 38 percent of global emissions, who jointly announced ratification on Sept. 3. Weeks later, Brazil and India -- two burgeoning economies viewed as critical to the deal -- entered their ratification papers, as did Canada.

Australia, Russia, the United Kingdom, much of Africa and nearly all the Middle East have yet to ratify the agreement signed by 195 nations last December.

"Above all, entry into force bodes well for the urgent, accelerated implementation of climate action that is now needed to realize a better, more secure world and to support also the realization of the [U.N.] Sustainable Development Goals," Patricia Espinosa, newly named executive secretary of the U.N. Framework Convention on Climate Change, said in a statement.

"Today, the world meets the moment," U.S. President Barack Obama said in a speech Oct. 5 from the White House Rose Garden. "“And if we follow through on the commitments that this agreement embodies, history may well judge it as a turning point for our planet."

The U.S.-based Catholic Climate Covenant said it was "greatly encouraged by the recent actions of our global leaders to address climate change."

Pointing to the pope's environmental encyclical, "Laudato Si', on Care for Our Common Home," the organization called for "courageous leadership -- especially from wealthy nations -- within the context of a strong international framework if we are to address the global ecological crisis."

In the annual message for World Food Day (Oct. 16), Francis said that climate change has made addressing hunger more difficult and that looking at its causes requires a deeper inspection beyond what the scientific data tells.

"First and foremost, we must admit that the many negative effects on the climate derive from the daily behaviour of people, communities, populations and States. If we are aware of this, a mere evaluation in ethical and moral terms is not sufficient," the pope said.

He continued: "It is necessary to act politically and therefore to make the necessary decisions, to discourage or promote certain behaviours and lifestyles, for the sake of the new generations and those to come. Only in this way can we preserve the planet."

The pace at which the Paris Agreement moved -- from adoption in December, to signing by a record 175 countries on the first day to do so, Earth Day, in April, to ratification six months later -- was unprecedented for recent international agreements, Espinosa said. For instance, the formation of the U.N. Framework Convention on Climate Change, which emerged from the 1992 Earth Summit in Rio de Janeiro, didn't enter into force until 1994.

The agreement's swiftness "correlated with the urgency of the crisis," said Tomás Insua, global coordinator of the Global Catholic Climate Movement. While the deal still has many flaws -- chief among them the shortfall of current commitments -- he said it serves as a "clear signal" that world leaders have the climate high on their agenda.

Another force that may have aided the urgency blew from the U.S. election, which provided added incentive to lock in the deal before a possible Donald Trump presidency. The Republican candidate has said that he would "cancel" the Paris Agreement and that global warming is a hoax manufactured by China.

On the heels of the Paris Agreement's commencement, more than 170 nations on Saturday in Rwanda completed a legally binding accord to phase out the use of hydroflourocarbons -- coolant chemicals used in air conditioners and refrigerators -- that trap immense amounts of heat in the atmosphere despite accounting for a small percentage of greenhouse gas emissions.

If the Paris Agreement reached at COP21 provided the world a destination for its climate journey, COP22 continues the process of charting the map to get there.

COP22 runs Nov. 7-18 in Marrakech, Morocco, a nation on the horn of Africa across the Strait of Gibraltar from Spain. Some have called it the action and implementation COP.

"They agreed on the agreement, now they need to start getting things done," Insua said.

Francis in the World Food Day message called on all states gathering in Marrakech "to give effect to these commitments" adopted last year at COP21.

"I echo the desire of many in expressing my hope that the objectives outlined by the Paris Agreement do not remain simply as good words, but rather that they are transformed into courageous decisions able to make solidarity not only a virtue but also a working model in economics, and fraternity no longer an aspiration but a criterion for domestic and international governance," he said.

One week before the Paris Agreement's ratification, Insua and nearly 50 others assembled at the Vatican to discuss the Holy See's preparation for COP22 while also taking stock of the impact of Laudato Si'.

The one-day consultation, titled "Laudato Si' and the Path to COP22," was convened Sept. 28 by the Pontifical Council for Justice and Peace and the Pontifical Academy of Sciences. In addition to the heads of both institutions, Cardinal Peter Turkson and Bishop Marcelo Sánchez Sorondo, attendees included:

A late-arriving participant was the pope himself. In a wrap-up blog, Insua recalled Francis saying, "This [climate change] is a human problem, it's our problem, so we should solve it. And it grows poverty and misery in the world, that's why I'm so worried about it."

That same day, Francis tweeted, "How beautiful would it be to leave the world a better place than the way we found it." -- a message that garnered nearly 20,000 retweets and 39,000 likes, one of his most-shared tweets this year.

How beautiful would it be to leave the world a better place than the way we found it.

The papal appearance, albeit brief, was an encouraging sign to several participants that the environment remains high on his agenda.

"He added an emotional momentum," said Marybeth Lorbiecki, director of the U.S.-based Interfaith Oceans, who attended the seminar.

Keeping up moral momentum from the encyclical as attention turns to implementation is critical, added Anthony Annett, another attendee and an adviser at the Earth Institute.

A final statement signed by 28 of the seminar's participants urged expedient ratification of the Paris Agreement by nations who have yet to do so, and said all countries should come to Marrakesh prepared to adopt national climate plans by 2030 and long-term low-emissions development strategies by 2050 in order to achieve agreed-upon limits on global warming.

"The Paris Climate Agreement should be understood as a pillar of the world's overarching commitment to integral and sustainable human development," they said.

The group added that all signatories should:

Beyond what participants at the Vatican summit wanted to see occur on the world stage, discussions also delved into what is happening, and what should happen, in their own churches.

In a way, implementation of Laudato Si', as well.

Ideas covered the possibility of church divestment, ingraining the encyclical into liturgical life, and the potential of the Catholic school system for sharpening the connection between faith and creation care.

A long-overdue step for the church, Insua said, takes a page from the Paris Agreement: report on its own emissions and track progress in lowering it.

"We have no clue what is our carbon footprint," he said. To find out, at least for church buildings, the Global Catholic Climate Movement has commissioned a working group to research how to allow for communities to submit online their carbon footprint and to track and set goals.

Perhaps the greatest impact the church could have, though, is to ensure the Western world "hear the cry of the earth and the cry of the poor" from the frontlines of climate change, said Annett, who, along with Sachs, is part of the U.N. Sustainable Development Solutions Network.

“Because we don’t realize exactly how climate change is affecting those poor and marginalized communities. It’s devastating, and it’s just not on our radar. It’s only when you hear people from the regions talking about it that it becomes very stark,” he said.

During the symposium, Cardinal Charles Bo of Yangon, Myanmar, said the fallout of climate change and environmental degradation in poorer countries, particularly for islanders and indigenous people, is tantamount to "genocide" by wealthier nations.

"That just tells you that in the eyes of the margins, in the eyes of the developing world, this is a top priority. Moral imperative. And you don't get that sense from listening to the political dialogue in the rich countries, especially not in the United States," Annett said.

A version of this story appeared in the Oct 21-Nov 3, 2016 print issue under the headline: As climate agreement enters into force, focus turns to making it work.