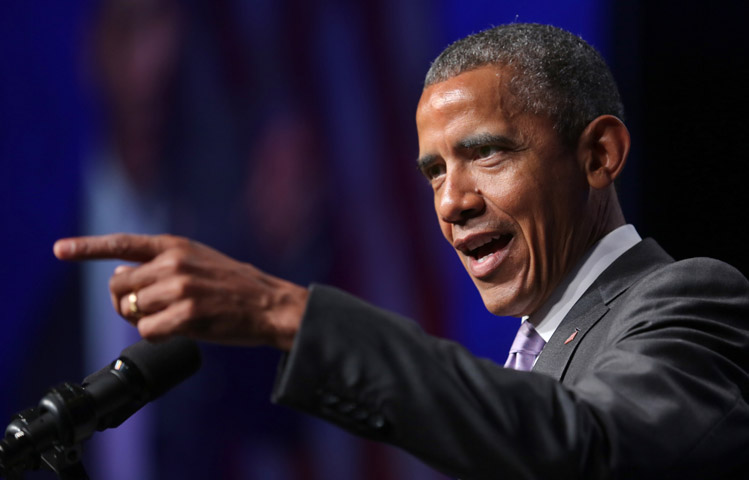 President Barack Obama rejected Friday the construction of the Keystone XL transnational pipeline, in part on grounds that approving the politically contentious project would have undercut U.S. leadership on the world stage in addressing climate change.

The proposed Keystone XL pipeline sought to move daily as many as 830,000 barrels of Canadian crude oil from Alberta tar sands fields to refineries in the Gulf of Mexico. The project would have stretched 1,100 miles, crossing the U.S.-Canadian border in Montana before linking with already-constructed Keystone pipelines. Unlike the southern leg, the northern leg, due to crossing an international border, required a presidential permit.

The president made the announcement before noon in Washington, flanked at the White House by Vice President Joe Biden and Secretary of State John Kerry. He said Kerry had informed him Friday morning that "after extensive public outreach, and consultation with other Cabinet agencies, the State Department has decided that the Keystone XL pipeline would not serve the national interests of the United States."

"I agree with that decision," Obama said.

He added that for years Keystone has held an "overinflated role in our political discourse," with supporters and opponents each overstating its potential benefit or harm.

"It became a symbol too often used as a campaign cudgel by both parties rather than a serious policy matter. And all of this obscured the fact that this pipeline would neither be a silver bullet for the economy, as was promised by some, nor the express lane to climate disaster proclaimed by others," Obama said.

As it turns out, the debate over Keystone, first proposed in September 2008, stretched more than double the days (2,604) than the miles (1,179) it would have traveled.

In his comments at the White House, the president briefly outlined the State Department’s decision, saying it concluded the pipeline would not provide a long-term boost to the economy, that it would not lower gas prices for Americans, and that it would not increase American energy security. In the absence of the pipeline, Obama touted the recent jobs report of 268,000 jobs created in October, and noted gas prices have lowered, down $1 per gallon from 2013. He said the U.S. has become more energy independent through producing more oil nationally while at the same time using less of it.

“So while our politics have been consumed by a debate over whether or not this pipeline would create jobs and lower gas prices, we’ve gone ahead and created jobs and lowered gas prices,” he said.

Steps to increase fuel efficiency and renewable energy while decreasing carbon pollution have established the U.S. as a world leader on climate change, the president said, and has led in part to nations representing almost 90 percent of global greenhouse gas emissions to put forward plans to cut pollution ahead of United Nations climate talks in Paris in December.

"America is now a global leader when it comes to taking serious action to fight climate change. And frankly, approving this project would have undercut that global leadership," he said.

Throughout the project’s lifespan, environmental activists have relentlessly raised Keystone as a "line in the sand" issue, with numerous religious groups joining the push against the pipeline. Many of the groups active in the anti-Keystone campaign celebrated Friday as a monumental victory.

“It has been a long struggle, but the call to care for the earth by turning away from fossil fuels is being heard,” said the Maryknoll Office for Global Concerns in a statement.

Patrick Carolan, executive director of Franciscan Action Network (FAN), told NCR he was pleased the president reached a decision that was long overdue. FAN has advocated against the pipeline since 2010, with several of its members arrested at various points outside the White House while protesting. In October, he and other religious leaders met with the State Department to talk about Keystone.

“We wanted to get the message to the White House that we thought this would be a really strong, powerful statement to make before Paris,” he said.

Carolan also viewed the Keystone denial as sending a strong message on the power of grassroots organizing to make a difference.

“Five years ago everybody said Keystone was a foregone conclusion, there’s nothing we could do to stop it. … [When] people of all different faiths and different personalities and different political persuasions come together on an issue, I think we can stop everything from anything, and change can happen,” he said.

TransCanada, the company that sought to build the pipeline, attributed its application rejection to “misplaced symbolism” and said the decision ran counter to numerous studies that found the pipeline a safer transport option to trains, trucks or tankers and posing minimal environmental impact.

“Through the course of its review, the U.S. State Department issued five very comprehensive and balanced scientific reviews of Keystone XL since 2010. Tens of thousands of pages of evidence from its own employees and agencies irrefutably show Keystone XL is the safest, most environmentally sound way to transport needed energy to Americans,” said Russ Girling, TransCanada president and CEO, in a statement.

TransCanada and its supporters projected the pipeline would create 9,000 U.S. construction jobs and as many as 40,000 related jobs throughout the U.S. supply chain, opponents challenged those figures.

Canadian leadership had supported the project since its proposal, extending to new Prime Minister Justin Trudeau who expressed disappointment with the ruling but respected U.S. authority to do so. Obama said he called Trudeau this morning to inform of his decision. Both leaders stressed a desire for both countries to work closer together on numerous issues, including energy and climate change.

Back in the U.S., Senate Majority Leader Mitch McConnell (R-Ky.) said he was not surprised by the president’s decision, and vowed it would not signal the end for a project important to North American energy independence: “The question remains not if but when Keystone will be built.”

“Our nation’s long-term need for the energy and jobs Keystone would provide will certainly outlast the little over a year remaining in the term of the current Administration,” said McConnell, who in January made Keystone the first order of business for the 114th Congress, in a statement.

Likewise, newly elected Speaker of the House Rep. Paul Ryan (R-Wis.) said Obama’s decision “isn’t surprising, but it is sickening. By rejecting this pipeline, he is rejecting tens of thousands of good-paying jobs,” while catering to special interests.

Rather than prioritize a Keystone revival, Obama challenged Congress to pass a bipartisan infrastructure plan he estimated would create more than 30 times as many jobs than the pipeline. In his own statement, Kerry said the U.S. needs to prioritize renewable energy opportunities and transition its manufacturing base to related jobs.

“Clean energy is not just the solution to climate change; it’s also one of the greatest economic opportunities the world has ever seen. If we continue to make smart choices, American businesses -- and American workers -- stand to benefit enormously,” he said.

During the summer, Mercy Sr. Mary Pendergast visited the Alberta tar sands, comparing the large holes in the earth she saw there to a war zone where “sickening orange and yellow green pools of water fill smaller craters.”

The Sisters of Mercy, like other religious groups, have engaged the State Department about Keystone, most recently in 2014. The pipeline has been not only a national concern, but one for sisters in in Latin America, the Philippines and areas experiencing melting glaciers, rising seas and extreme weather, said Sr. Patricia McDermott, president of the Sisters of Mercy of the Americas.

“By this action, the President has signaled that we join the world in recognizing climate change and our dependence on fossil fuels as issues that must be addressed,” she said in a statement.

Dallas Goldtooth, the primary organizer against the pipeline of the Indigenous Environmental Network, said Obama’s decision validated the efforts of numerous tribes, particularly those living near the Canadian tar sands.

“With the rejection of Keystone XL we have not only protected the sacredness of the land and water we have also helped our Cree & Dene relatives at the source take one step closer to shutting down the tar sands,” he said.

Eli McCarthy, director of justice and peace for the Conference of Major Superiors of Men, saw significance in Obama’s connection of his decision to climate change, in that it created political space for him to operate in Paris.

“It sounds like he’s going to really make this a priority in the last part of his term, and I think there’s going to be more and more Catholics that are going to start to really support and try to move that forward,” said McCarthy, noting the past year has seen male religious prioritize creation care, culminating in a resolution passed in August.

“President Obama is the first world leader to reject a project because of its effect on the climate. That gives him new stature as an environmental leader, and it eloquently confirms the five years and millions of hours of work that people of every kind put into this fight,” said Bill McKibben, co-founder of 350.org and one of the anti-Keystone leaders.

May Boeve, 350.org executive director, added that the Keystone rejection, while “a clear sign” of the movement’s strength, doesn’t represent the end of the road, saying it “will not rest” until the U.S. economy shifts fully from fossil fuels.