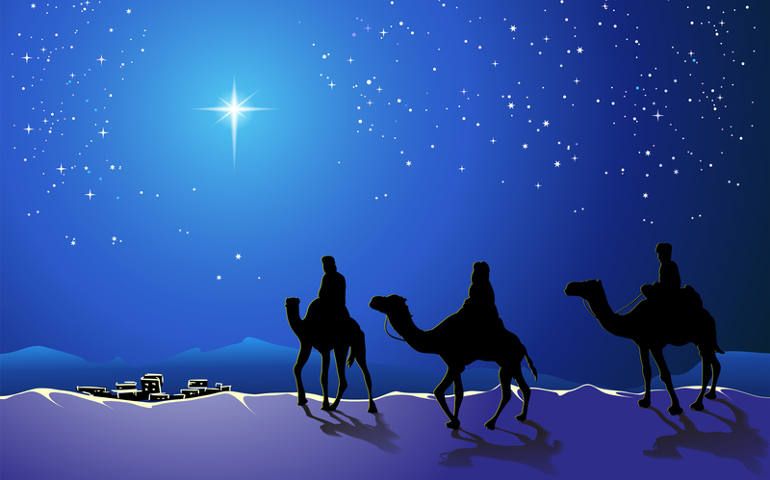 The magi and the Star of Bethlehem (Dreamstime)
This article appears in the Christmas 2015 feature series. View the full series.

For 2,000 years, the Star of Bethlehem story has prompted countless questions. Was the illusive celestial traveler that was seen only by the Magi a myth? A miracle? A comet?

Did Matthew indulge in a bit of Scriptural Midrash, by using an imaginative telling of Jesus’ birth to connect it with Old Testament prophecies predicting his arrival?

Jay Young presents an alternative perspective, which he believes comes closest to solving the mystery. Young, an associate business professor at Ohio Dominican University in Columbus, is a former practicing psychologist whose lifelong hobby is astronomy. At age 10, he took to stargazing and hasn’t stopped since.

Twenty years ago, Young began a new winter custom. He vowed to read the latest book published annually about the Christmas star.

His persistence struck gold in 1999, when he discovered a fascinating piece of research -- The Star of Bethlehem: The Legacy of the Magi written by Michael R. Molnar, a retired astrophysicist at Rutgers University. Young told NCR he credits the scientist with setting the previous speculations on their heads, and coming up with an explanation that currently makes the most sense.

Nearly a decade ago, Young created a PowerPoint presentation based on Molnar's work, which he often shares with interested church and astronomy groups in the Central Ohio area during the Christmas season. He most recently gave his presentation Dec. 13 to a gathering of the C.G. Jung Association in downtown Columbus at its JungHaus.

Molnar’s findings bring together a combination of factors close to Jesus’ birth: planetary activity, history, politics, newly minted coins in Antioch, scriptural prophecies and astrology. The astrophysicist links them together with the concept of “synchronicity,” a word coined by famed psychiatrist Carl Jung that expresses the idea of “meaningful coincidence.”

“We don’t need a miracle. It’s a natural solution, a coming together of all those circumstances,” said Young, explaining that Molnar took an entirely new tack in his research. Molnar “went backwards in time,” Young said, using sophisticated computer software, to see what was happening in space around the time of Jesus’ birth.

What Molnar discovered was a lunar eclipse on April 17, in the year 6 B.C. Its path would explain why the Gospel writer Matthew reports in chapter 2:2-10 the sighting as a star that moved forward, then backward. This might have happened because the planet Jupiter had gone into retrograde, which would explain why it journeyed in one direction, reversed its course, and “stood still” over Bethlehem in December 6 B.C., Molnar explained.

The eclipse in question was a lineup of stars and planets that would have riveted the attention of the Magi. These ancient wise men from Persia were highly respected. They served kings, interpreted dreams, healed the sick and explained physical phenomena, including planetary movements as signs of the future.

The configuration they saw in the sky, Molnar says in his book, was a lunar eclipse of Jupiter, the kings’ planet, in the Aries constellation. Aries the Ram, Molnar argues, was Judea’s astrological sign.

It took the Magi a long time get to Judea. They saw the eclipse on April 17 of 6 B.C. -- the date Molnar believes probable for Jesus' birth, although scholars and theologians continue the debate -- but the coming summer meant that they had to take a route through the Fertile Crescent to bypass the grueling Persian Desert. By the time they arrived and spoke to Herod in December of 6 B.C., Jesus would have been a toddler, which would explain Herod’s attack on all baby boys age two and under.

While astrology was widely popular in the Greco-Roman world, the Jewish people did not practice it. They respected practitioners, Young said, but would not have known about Judea’s “horoscope” predicting the birth of their long-awaited Messiah.

That’s why Herod was so unpleasantly surprised when his astrologer guests from the East came knocking on the palace door. All the king could tell them was what he knew from Scriptural prophecies, that Bethlehem was the specific place to look for the child.

Young noted that the role of astronomy, at that time, was to act as the servant of astrology by providing the necessary mathematical tools they needed in tracing the movement of the planets. In modern times, the tendency is to honor astronomy for its mathematical know-how valuable to engineers, he said, “and astrology is regarded as fluffy.”

But Carl Jung saw astrology as important in a different sense, Young pointed out.  Molnar quotes Jung in his book: “The starry vault of heaven is in truth the open book of cosmic projection in which are reflected archetypes,” such as kings, warriors, saviors. These archetypes showed up in the planets and the stars, and their movement was said to influence life on earth, countries as well as individuals, political situations, life and death.

Young further quotes Jung as predicting that “I dare say that we shall one day discover in astrology a good deal of knowledge that has been intuitively projected into the heavens.  For instance, it appears that the signs of the zodiac are character pictures, in order words libido symbols which depict the typical qualities of the libido at a given moment.”

Young’s presentation gets down to earth, telling of circumstances brewing across the Middle East, particularly Judea. The Jews were longing for a Messiah to rescue them from Herod, the cruel puppet king foisted upon them by Rome.

The Hebrew Scriptures had predicted the Messiah’s birth. In the Book of Numbers, believed to be written around 1,400 B.C., mentions a star (24:17):  “I see him, though not now; I observe him, though not near. A star shall advance from Jacob (Judea), a scepter shall rise from Israel, that will crush the brows of Moab, and the skull of all the Sethites.”

Even several coins minted in Antioch noted the existence of the star. One of them shows a ram looking backward at one.

In his years holding the presentations on Molnar’s findings, Young said they have been warmly received.

Ruthmary Mangan, one of the attendees at his talk in Columbus, described Young as “a marvelous teacher able to make complex material understandable.”

“What I found so interesting is, we tend to look for the spectacular, but it is really quite simple outwardly,” she said.

EarthBeat | Seeking synchronicity in the Star of Bethlehem story